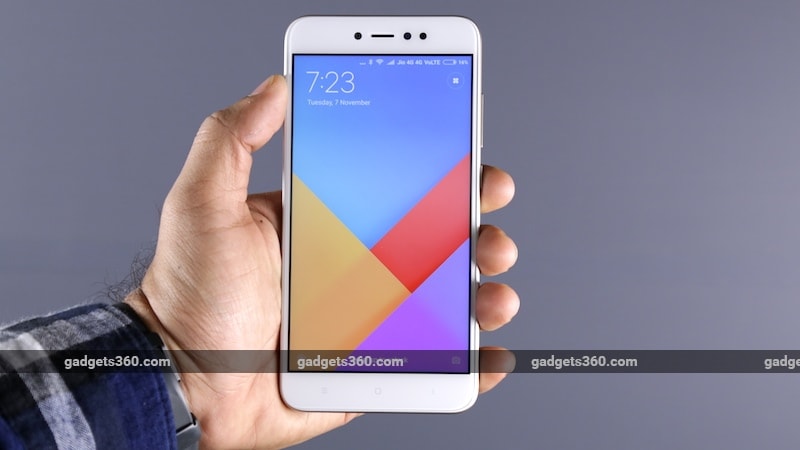 Xiaomi has been in the Indian market for close to four years now, during which time it has managed to climb up to the number two spot, just behind Samsung. With the top spot in sight, the Chinese company has been steadily widening its portfolio in the country. In the last few months, we saw the introduction of its flagship, the Mi Mix 2 (Review), and the Android One-powered Mi A1 (Review). Xiaomi has launched yet another series in the country this month, dubbed the Redmi Y series. With this move, Xiaomi is looking at a dedicated lineup to cash in on the selfie craze. Its first device, the Redmi Y1, has good specifications on paper, but should it be your first choice? We find out.

One look at the Redmi Y1 and it is safe to say that it carries the family look. We wouldn’t be surprised if you mistook it for the Redmi 4 at first glance. Hold the phone and you will see that the Redmi Y1 is bigger than the Redmi 4, sporting a 5.5-inch display. This selfie-focused phone has a 16-megapixel camera at the front along with a diffused selfie flash. There are non-backlit capacitive touch buttons below the screen for navigation instead of on-screen touch buttons, and the usual sensors above it as well.

Pick the phone up and you will notice that it is fairly light at 153g. Xiaomi has used plastic in its construction, which helps keep the weight down. While the chrome highlights give the impression that it has a metal backplate, the entire rear and sides along with the power and volume buttons are made out of plastic. The 13-megapixel primary camera and the single-LED flash are positioned in the top left corner while the fingerprint scanner is at the centre. The scanner location is convenient making it easy to reach.

The bottom of the phone has the Micro-USB port for charging, and grilles on either side. It also has an IR emitter that some might find handy, located on the top of the phone along with a secondary mic for noise cancellation and a 3.5mm headphone jack. We liked the build quality of the Y1 because it still feels premium despite the plastic. The packaging of the Redmi Y1 is bare basic and so are the contents - in the box you only get a SIM ejector tool, a 10W adapter, and a Micro-USB cable.

"If it ain’t broke, don’t fix it", seems to have been Xiaomi’s motto while designing the Redmi Y1. To power the device Xiaomi has chosen the same Snapdragon 435 SoC that is currently powering its Redmi 4 (Review) smartphone. This is an octa-core processor clocked at 1.4GHz. The Y1 has two variants, one with 3GB of RAM and 32GB of storage, and the other with 4GB of RAM and 64GB of storage. Pick either and you still get the option to expand storage by up to 128GB using the dedicated microSD card slot.

While the screen size has grown to 5.5 inches compared to the Redmi 4, it still has the same HD 720x1280 resolution. There is 2.5D curved Corning Gorilla Glass for protection. The highlights of the Y1 are its 16-megapixel front-facing camera and diffused selfie flash. There are very few phones that have such a sensor at the front, and the inclusion of the front facing flash increases its appeal. The primary camera on the rear has a 13-megapixel sensor with PDAF and a f/2.2 aperture.

To power the Y1, Xiaomi has used a 3080mAh non-removable battery which is lower capacity than the 4100mAh unit in the Redmi 4. For connectivity, the Redmi Y1 has Bluetooth 4.2, Wi-Fi 802.11 b/g/n, GPS, AGPS, GLONASS and Beidou support. Sensors on the Redmi Y1 include an accelerometer, proximity sensor, ambient light sensor, electronic compass, hall sensor, and gyroscope. There is support for 4G and VoLTE on both SIMs but only one can access a 4G network at a time.

For our review, we had the 3GB/32GB variant of the Redmi Y1 running MIUI 9 Beta on top of Android Nougat. MIUI 9 has quite a few new features. The Redmi Y1 will initially be sold with MIUI 8 but will be updated to the final version of MIUI 9 in the coming weeks. It is unknown whether Xiaomi plans to upgrade the underlying version of Android. If you have used MIUI before, you’ll find yourself at home when navigating through menus and the Settings app, but if you have been used to stock Android or a different skin of Android then you might take some time to adapt to it. Settings are rearranged to some extent and MIUI handles apps permissions a little differently. Once you get a hang of it, you might like the flexibility and convenience that MIUI offers over stock Android.

Some of the added features include Dual Apps, which lets you create two instances of an app on the phone so you can have two instances of apps such as Facebook, Instagram, WhatsApp and others. There's a reading mode as well, which makes the screen colour tone warmer and more comfortable to use at night. Xiaomi has quite a few of its apps preinstalled including Mi Browser, Mi Drop, Mi Remote, Mi Community, Mi Store, Mi Video, Notes, Recorder, Weather and also a couple of third-party apps like WPS Office, Amazon Shopping and UC News. Xiaomi also has its own curated app store called Apps and a Security app as well. There is theme support which lets you change the look of the phone in a couple of seconds. Since we were on MIUI 9 Beta, preinstalled apps might be different on MIUI 8 and MIUI 9 when it finally releases for the Y1.

With proven internals, it isn’t surprising that the Y1 provides a decent lag free experience. The phone is quick to unlock itself after scanning your fingerprint, and quick to launch apps on MIUI 9. We liked the display on the Y1, as colour reproduction is accurate and viewing angles are quite good. You can also tweak the display by changing the colour temperature and contrast to suit your taste. The phone could multitask with several apps running, without killing background processes. Overall, we were happy with the software and hardware combination that Xiaomi has on offer.

We played games such as Clash Royale, Asphalt 8 and Prime Peaks while testing. The phone has no trouble running these games and it rarely got warm. However, we did notice that longer gaming times did affect the battery adversely. Only the right grill houses a speaker, and while it is loud enough, it is also easy to muffle when holding the phone in landscape mode.

To check how the Y1 performs, we put it through a series of benchmarks. It clocked 45,762 in AnTuTu and managed 668 and 2,503 respectively in Geekbench's single-core and multi-core test. Battery life is average on the Redmi Y1, and it lasted one day only if we restricted ourselves to light use. In our HD video loop test, the Y1 survived for 9 hours and 45 minutes which is lower than the 14 hours and 20 minutes that the Redmi 4 clocked with its larger battery and smaller screen. If battery life is a priority, the Redmi 4 looks like a better option.

The camera app on the Y1 is similar to that of other Xiaomi phones. You get quite a lot of modes to choose from including Panorama, Beautify and Manual. The app has quick toggles for HDR and the flash which are quite handy. The selfie camera mode also has a control for Beautify mode which can be set to different levels or to Auto. Photos taken in daylight have good amounts of detail and colours are quite accurate. Low light is where the camera performance isn’t great. The phone manages to keep noise levels down but the output is grainy and you will need a steady hand to take usable photos.

Selfies are the highlight of this new series, and we tested the front camera under various lighting conditions. In daylight, images are sharp but have a lot of grain which is visible on zooming in. In low-light, the selfie flash is quite handy and portraits turn out well, but grain is still visible in the background. Beautify mode does smoothen the output resulting in a better image, but overall the front camera isn’t quite there yet.

The Redmi Y1 is Xiaomi’s first attempt at making a selfie-focused phone. The hardware is proven and good enough to run most things you might throw at it. MIUI 9 is smooth and people should find it easy to adapt to. Camera performance is good in daylight but is average in low-light. As for selfies, the flash is helpful and the beautify mode does work a bit, but the output is not always good.

The biggest competitor to the Redmi Y1 is Xiaomi's own Redmi 4. Both phones are priced similarly and have similar core hardware. The Redmi 4 gets a much bigger battery in a more compact metal body, but the Redmi Y1 has a bigger screen and front flash. If you are selfie-obsessed, the Redmi Y1 could make sense. For most others though, the Redmi 4 is still the phone to beat at this price.

Editor's note: When the review was originally published, it carried a battery score of 8 instead of 7 due to human error while entering them in our system. The review text remains unchanged. The error is deeply regretted.

Why did Xiaomi launch the Redmi Y1 series of smartphones? We discuss this on our weekly technology podcast Orbital, which you can subscribe to via Apple Podcasts or RSS or just listen to this episode by hitting the play button below.