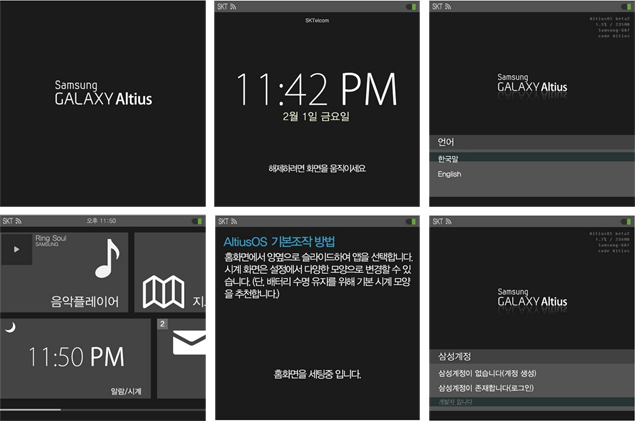 The year has just begun and looks like Apple and Samsung are at it again. Recently we heard that Apple is known to be working on an iOS-running wristwatch-like device with a curved glass display. Samsung is also rumoured to be working on a smart watch as part of its Project J lineup codenamed Fortius is likely to come with an arm band, will have the ability to bike mount and will come with a pouch as well.

Now, a fresh set of screenshots in 500x500 pixels reveal that a Samsung smart watch currently named the Galaxy Altius is in the making. Until now, the codename Altius was associated only with the Samsung Galaxy S IV. But if the watch is indeed reality, then it could be a part of the 'Altius family' highlighting at a new generation of devices altogether.

Coming back to the screenshots, if you pay close attention, you can get an idea of what Samsung is getting at. A slight indicator in the upper left corner in all the screenshots reveals the cellular connectivity showing the mobile network of South Korean carrier SKT.

The device is seems to be running on a beta version of the AltiosOS. This is strange since Samsung never uses the word 'beta' on any ongoing projects. Though both the device name and that of the OS phonetically sound the same, they seem to be spelt differently.

Another screenshot shows a series of tiles resembling the Windows Live Tiles interface that highlights various facets such as a music player, a digital clock and an envelope icon hinting at email/messages with the number "2″ suggesting unread messages.

Another noticeable feature is the fact that the last two tiles aren't fully visible and there's a bar at the bottom that looks like there's more at the other end, shows that this device will quite likely have a touchscreen display. The upper right-hand corner of a couple of the shots shows the "Samsung-GA7″ code name, which is indicative of an LCD display.

It was interesting to go through the reader comments on SamMobile's blog regarding this particular post. One such reader points out that the DPI for these images seem to indicate a display size of 2,3,or 5-inches, that will be pretty huge for a wrist watch. The reader goes on to say that the telecom operator initials SKT look "pixelated and condensed" suggesting that it could have been added. Also, he points out that "Samsung NEVER uses a Watermark for his prototypes".

As of now there is no official acknowledgment of such a project from Samsung.
Comments