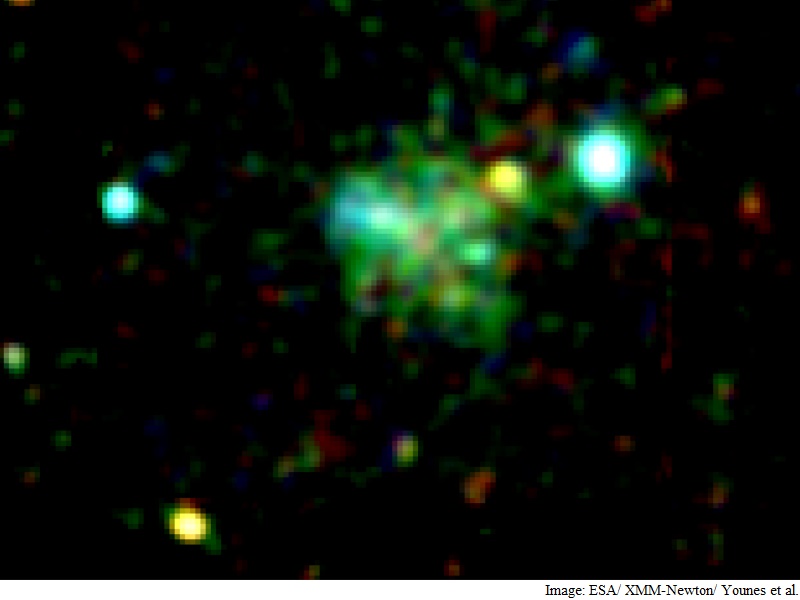 In a first, astronomers have discovered a vast cloud of high-energy particles called a wind nebula around a rare ultra-magnetic neutron star, or magnetar.

The find offers a unique window into the properties, environment and outburst history of magnetars, which are the strongest magnets in the universe.

A neutron star is the crushed core of a massive star that ran out of fuel, collapsed under its own weight, and exploded as a supernova.

Neutron stars are most commonly found as pulsars, which produce radio, visible light, X-rays and gamma rays at various locations in their surrounding magnetic fields.

Typical pulsar magnetic fields can be 100 billion to 10 trillion times stronger than Earth's. Magnetar fields reach strengths a thousand times stronger still, and scientists don't know the details of how they are created.

Of about 2,600 neutron stars known, to date only 29 are classified as magnetars.

"Right now, we don't know how J1834.9 developed and continues to maintain a wind nebula, which until now was a structure only seen around young pulsars," said lead researcher George Younes, postdoctoral researcher at George Washington University in Washington.

"If the process here is similar, then about 10 percent of the magnetar's rotational energy loss is powering the nebula's glow, which would be the highest efficiency ever measured in such a system," Younes said.

A month after the Swift discovery, a team led by Younes took another look at J1834.9 using the European Space Agency's (ESA) XMM-Newton X-ray observatory, which revealed an unusual lopsided glow about 15 light-years across centreed on the magnetar.

New XMM-Newton observations coupled with archival data from XMM-Newton and Swift, confirmed this extended glow as the first wind nebula ever identified around a magnetar.

A paper describing the analysis will be published in a forthcoming issue of The Astrophysical Journal.

"It represents a unique opportunity to study the magnetar's historical activity, opening a whole new playground for theorists like me," team member Jonathan Granot from Open University in Ra'anana, Israel, said.