Hyperloop works on a technology that would use magnetic levitation in low-pressure tubes to transport people and goods at airplane-like speeds. 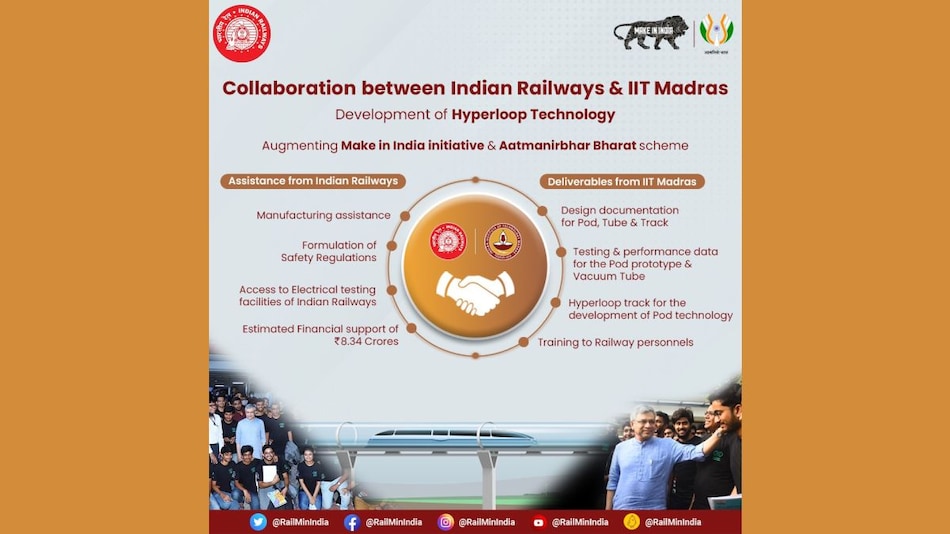 The Ministry of Railways will collaborate with IIT Madras for the development of an "indigenous" Hyperloop system and will also help set-up a Centre of Excellence for Hyperloop Technologies at the premier institute, officials said Thursday.

In 2017, the then Railway Minister Suresh Prabhu had expressed his interest in the Hyperloop technology, saying that India would be keenly watching the project and since then, several rounds of talks over the proposed project had been held between the ministry and US-based Hyperloop One, but nothing substantial emerged.

To usher into a new era of transportation, Indian Railways has come together with @iitmadras to develop a hyperloop technology based transportation system.
Indian Railways will extend financial support of Rs. 8.34 cr to IIT Madras for this project. pic.twitter.com/xUoMyxj9QU

Hyperloop works on a technology that would use magnetic levitation in low-pressure tubes to transport people and goods at airplane-like speeds.

The low energy requirement and the significant role that this technology can play in making India Carbon neutral, makes Hyperloop mode of transportation an attractive proposition for Indian Railways, the ministry said in a statement.

"Ministry of Railways had therefore been looking for potential partners and domain experts for joint collaborative working on development of this emerging and evolving concept for transportation of passengers and cargo.

"The Ministry of Railways was informed that a team comprising 70 students, named “Avishkar Hyperloop”, formed by IIT Madras in 2017, has been applying scalability and frugal engineering concepts for development of Hyperloop based transportation system with an aim is to make India proud by showcasing its technologies to the world," the statement said.

"Collaboration with IIT Madras for development of an Indigenous Hyperloop system and setting-up of a “Centre of Excellence for Hyperloop Technologies” at IIT Madras," the Railways said.

The group had finished in top-10 global ranking at the SpaceX Hyperloop Pod Competition-2019 and was the only Asian team to do so. The student team “Avishkar Hyperloop” had also bagged the ‘Most Scalable Design Award' at the European Hyperloop Week – 2021.

IIT Madras approached Ministry of Railways in March-2022 with a proposal for collaborative working on development of contactless pod prototype and development of first-of-its-kind Hyperloop Test Facility at its Discovery Campus (at Thaiyur). Once established, the proposed facility would offer world's largest Hyperloop Vacuum Tube that can be used as Test Bed for further research on Hyperloop by Indian Railways.

The institute sought support from the Railways for manufacturing assistance, formulation of safety regulations and access to its electrical testing facilities.

It has also requested for funding support by Ministry of Railways for taking this project ahead. The estimated cost of the Project, as conveyed by IIT Madras, is Rs. 8.34 crore.

The project deliverables for IR would included detailed design documentation for Pod, Tube & Track, detailed testing and performance data for pod prototype and vacuum tube, provide IR with Hyperloop track as a testing platform for development of Pod technology in the interim and provide training to Railway Personnel for Hyperloop technologies.

The institute has also proposed to establish a “Centre of Excellence for Hyperloop Technologies” at IIT Madras through existing CRR (Centre of Railway Research) at IIT Madras.

The existing CRR (Centre of Railway Research) at IIT Madras is located in MSRC building of the institute and has been functioning since 2017 with the funding support from Ministry of Railways.

Five projects are under progress with the existing CRR at IIT Madras and it has been providing training to railway engineers on subjects like Lean Manufacturing, Condition Monitoring and Concrete Testing and analysis. The plan, officials said is to build a 500m tube (diameter 2m) and track capable of supporting various propulsion and levitation system configurations to enable rapid development of pod technology. The tube will be at par with the Virgin Hyperloop facility in USA in terms of functionality but will significantly outperform it in terms of cost, the statement from the Railways said.

The hyperloop concept has been promoted by Elon Musk and SpaceX, and other companies or organizations have been encouraged to collaborate and develop the technology. Virgin Hyperloop conducted the first human trial in November 2020 at its test site in Las Vegas, reaching a top speed of 172km/hr (108mph).