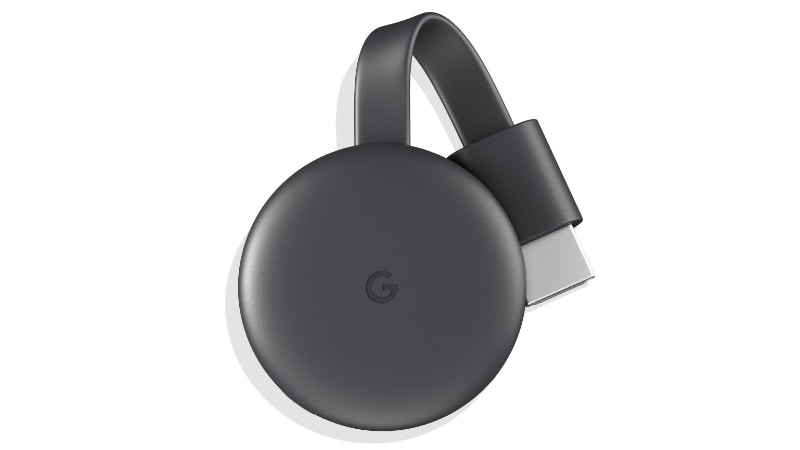 Google Chromecast 3 is presently available for purchase through Flipkart

Google Chromecast 3 that was unveiled earlier this month with an all-new design has now been launched in India. The new Chromecast model comes as the successor to the Chromecast 2 that debuted back in September 2015 and was launched in the country in April 2016. Being a refresh in the Chromecast family that was introduced back in July 2013, the third-generation Chromecast has a design that matches the aesthetics of the rest of the Made by Google family that comprises Google Home speakers, Pixel phones and computing devices, and Daydream View headset. There is also new hardware under the hood that is touted to perform 15 percent faster than the previous Chromecast. The Chromecast 3 additionally supports 60fps video streaming at full-HD (1080p) resolution.

Google Chromecast 3 price in India has been set at Rs. 3,499, and it is available in its Charcoal colour variant. It is currently exclusively available for purchase through Flipkart, though we can expect its arrival on the Google Store and other online stores as well in the coming days. As an introductory offer, customers purchasing the Chromecast 3 from Flipkart get a free one-year subscription to Sony Liv and six months of ad-free streaming on Gaana. The online marketplace is also offering a Rs. 100 cashback when purchasing the new Chromecast using a PhonePe account. Similarly, customers using an Axis Bank debit or credit card can avail a 10 percent instant discount. This comes as a part of the ongoing Flipkart Festive Dhamaka Days sale that will end on October 27.

In the US, the Chromecast 3 is available with a price tag of $35 (roughly Rs. 2,600) and comes in Chalk and Charcoal colour options.

Google Chromecast 3 has an HDMI interface to let you watch your favourite videos directly on your HDTV. It also allows you to mirror the screen of your smartphone or cast the content of a compatible app to your TV. There are more than 800 apps that are compatible with the Chromecast. You can also mirror the screen of your computer to your TV using the Chromecast and Chrome browser. These are the features that are a part of the Chromecast family since its inception. However, as an upgrade over the predecessor, the new Chromecast is claimed to deliver 15 percent faster performance. There is also support for 60fps video streaming at full-HD (1080p) resolution. This is higher than the previous 60fps streaming support that was limited to HD (720p) resolution.

As a new Google product, the third-generation Chromecast model is designed to work with Google Assistant. You can also connect your Google Home speaker with the Chromecast to simply use your voice to play a particular YouTube video on your TV. Google also has plans to bring the ability to let the Chromecast play music in sync throughout your home by connecting multiple speakers.

The Chromecast 3 has a flexible HDMI cable, similar to the previous Chromecast model. Also, there is a Micro-USB port to enable power supply. The device uses Wi-Fi connectivity to play online content on your TV. The casting feature of the Chromecast can be used through an Android or iOS device. Moreover, the list of compatible apps for the Chromecast includes Netflix, YouTube, HBO, and Hulu among various others.

Similar to its predecessor, the Chromecast 3 comes with a hockey puck-like design. There is, however, a matte finish instead of the glossy one featured on the previous Chromecast model and Google's iconic "G" logo on top. The Chromecast 3 measures 162 x 51.8 x 13.8mm and weighs 39.1 grams.