Paytm Mini App Store allows users to explore and use its listed apps without any additional download. 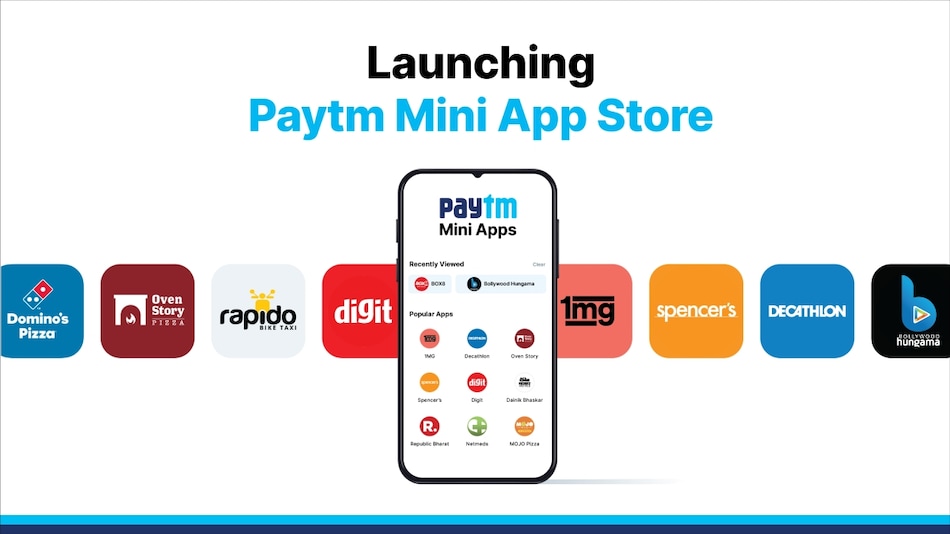 Paytm Mini App Store can be accessed from the main app

Paytm Mini App Store has been launched within the digital payments app, the company announced on Monday. Paytm announced this just days after tech entrepreneurs in India rallied for a national app store, but this is slightly different. Instead of giving native apps and developer tools, Paytm is hosting links to progressive Web apps (PWAs) which are light apps that can run within a Web browser without requiring any installation. As of now, the Mini App Store only has a few apps listed, although Paytm plans to list 300 services in the coming days.

According to Paytm's press release, the Mini App store has been designed to help small developers and businesses in India to set up low-cost and easy-to-build apps using HTML and Javascript. These apps open within a window inside the Paytm app itself, and the listings will also be free, Paytm said.

Paytm will also provide developers with free payment avenues including Paytm Wallet, Paytm Payments Bank, and UPI. However, it should be noted that a two percent extra charge is levied for payments using credit cards. For developers, Paytm has also provided a dashboard for analytics, payments collection, and various marketing tools to better engage with users.

Paytm Mini App Store has listed only a handful of apps as of now, with more to follow later

Paytm said that the Mini App Store has been in its beta testing phase with select users in the country for some time and has seen over 12 million visits in the month of September. It has already been populated with a handful of apps such as AQI Monitor, EMI Calculator, MojoPizza, Horoscope, Speedtest, and Unit Converter. Paytm said that over 300 app-based service providers have already joined the programme, including the likes of Decathlon, Domino's Pizza, FreshMenu, Netmeds, NoBroker, Ola, and more. These apps are expected to make their way to the Mini App Store soon.

A Twitter user posted that the feature had already been available on the Paytm app from earlier, for "a few months at least." Gadgets 360 has reached out to the company for clarifications on the matter. This report will be updated when we hear back.

To access the Mini App Store, open your Paytm app. On the home page, click on Show More > Mini App Store from the pop-up menu. The portal allows direct access to users to explore, use, and make payments through the apps, without any additional downloads or installs.

Late last month, Google announced that it would enforce its 30 percent fee for apps that are on Google Play but are not using its billing system. This led Indian app developers and entrepreneurs to demand for a national app store alternative to Google Play.

In a recent development, Google has pushed back enforcing the 30-percent in-app commission for developers in India until March 31, 2022. The tech giant says that the delay has been brought in place so that Indian developers “have enough time to implement the UPI for subscription option that will be made available on Google Play — for all apps that currently use an alternative payment system.”

Paytm was also among one the key Indian apps that was pulled from Google Play recently. Google later clarified that Paytm was removed from the platform for violating its content rules, and not for offering cashbacks and vouchers, as Paytm claimed.