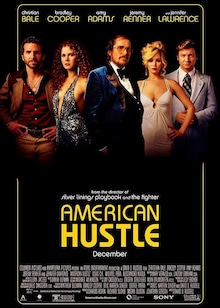 Irving is married to Rosalyn (Jennifer Lawrence) but he's hesitant to come out of his unstable relationship, in fear of losing contact with his adopted son.

At the same time, Irving loves his con artist partner Sydney (Amy Adams) with whom he's caught red-handed by FBI agent Richie DiMaso (Bradley Cooper) in a loan scam. The grift duo are offered a release if they can aid in lining up four additional arrests.

They have to work as secret undercover agents for DiMaso's sting operation to nail the Mayor of Camden, New Jersey (Jeremy Renner).

Rosalyn, who is jealous and unhappy about everything, can become the gamechanger and bring everyone's world crashing down. Rating 90
Rate this Movie
Your Rating