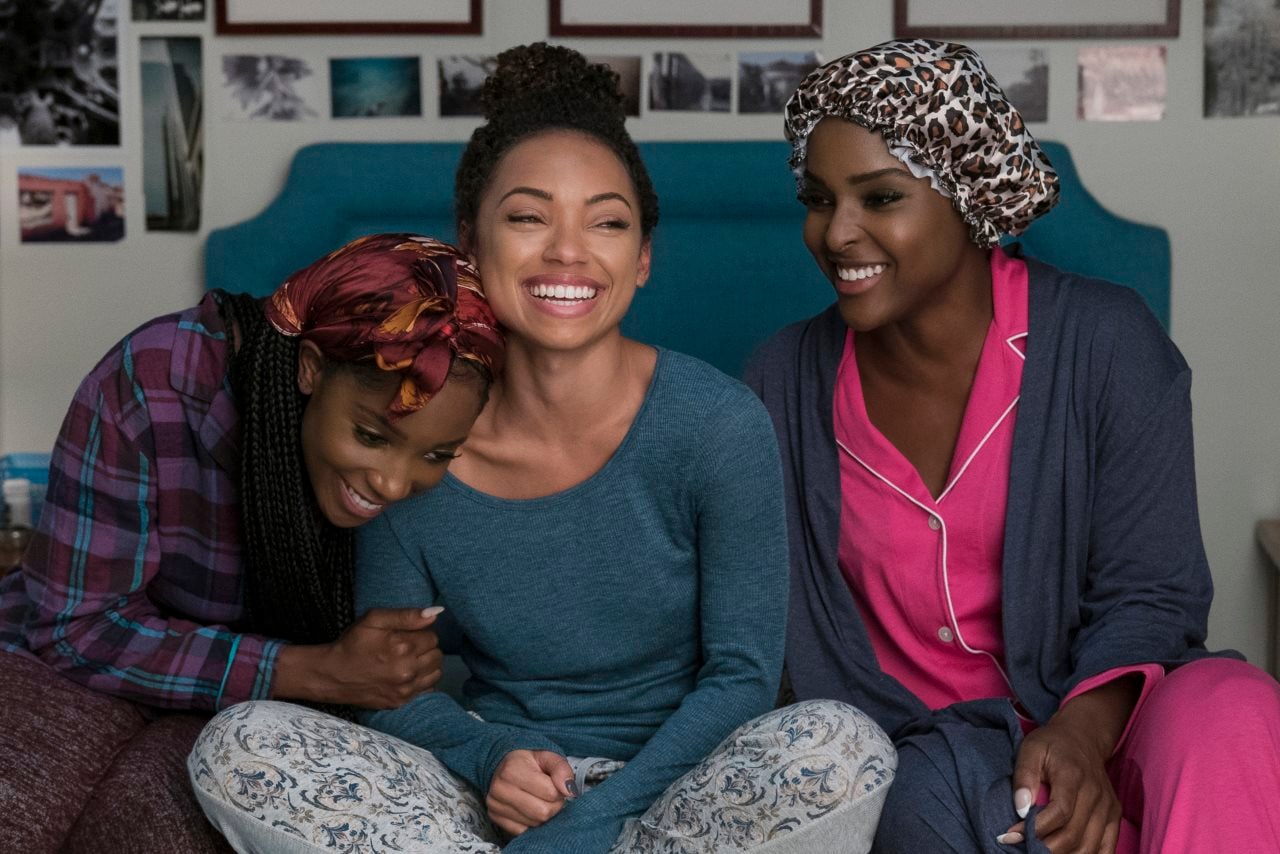 On Monday, Freeform released the final trailer for its upcoming YA series, Marvel’s Cloak & Dagger. It stars Aubrey Joseph and Olivia Holt as the two title stars respectively, and premieres June 7. On Tuesday, there was even more Marvel stuff: Ant-Man and the Wasp got a new trailer, and it's out July 6. The film is actually set before the events of Infinity War.

On Tuesday, HBO announced that it had renewed Westworld for a third season, just two episodes into its second. And on Wednesday, Hulu announced a third-season pickup for The Handmaid’s Tale, just a week into its second. Hulu also said it has crossed the 20-million subscriber mark in the US.

Later on Wednesday, a Variety reporter tweeted that Marvel has already met with 65 directors for the standalone Black Widow film, and that they’re “being extremely thorough on this one”. It’s good to see that the film is making progress, after getting a screenwriter a couple of months back.

On Thursday, The Hollywood Reporter brought word that Julius Avery is in negotiations to helm The Heavy, a superhero movie J.J. Abrams will produce via his Bad Robot production label. And on Friday, Netflix released a teaser trailer for its upcoming Indian original, Sacred Games.

TV:
Dear White People
After expanding his own Sundance hit, a deep-cutting satire that explored racial tensions at a prestigious Ivy League college through the perspective of several African-American students, in fine fashion last year, Justin Simien is back with a second season of Dear White People, with the fictional Winchester University struggling to move on from the protests. The show will continue its trend of focusing on different protagonists with each episode.

The story follows biracial film major Samantha White (Logan Browning), whose radio show continues to be a source of controversy, while the dean’s son Troy Fairbanks’ (Brandon P. Bell) attempts to become the first black student president ended with his arrest. Actor and Emmy-winning writer Lena Waithe joins the cast as P Ninny, appearing on a reality show watched by students. Giancarlo Esposito (Breaking Bad) is brought on board as narrator.

Dear White People: Volume 2, as it’s subtitled, is getting good reviews. Vanity Fair’s Sonia Saraiya loved it so much she wants another set of 10 episodes “as fast as humanly possible, so as to snack on another round of these addictive, delectably formed instalments”. Writing for RogerEbert.com, Brian Tallerico said: “This is a show that can consistently surprise you, balancing the issues of today with specifically, character-drive, relatable emotions.”

Cobra Kai
Set 34 years after the original Karate Kid film, the show follows a down-and-out Johnny Lawrence (William Zabka) reopening the infamous Cobra Kai karate dojo and rekindling his rivalry with now-successful car dealer Daniel LaRusso (Ralph Macchio), who has been struggling to maintain balance without the guidance of his mentor, Mr. Miyagi.

Jon Hurwitz and Hayden Schlossberg, co-writers of Harold & Kumar, and Josh Heald are behind Cobra Kai. Hurwitz and Schlossberg have also directed multiple episodes of the first season, which contains a total of 10 episodes and were released all at once on YouTube Red, the subscription-based tier of YouTube that’s available in a few regions. The first two episodes are free.

Critics liked what they saw. Uproxx’s Alan Sepinwall called it “compulsively watchable, emotionally engaging, and almost always one step ahead of where you think it’s going”, while Variety’s Mekeisha Madden Toby added: “This show gets a lot of things right from the perfect amount of references and music from the original and the acid-washed 1980s where the movie reigned supreme to the impressive casting and acting.”

Movies:
Mary and The Witch’s Flower
The debut feature from Studio Ponoc, which features Studio Ghibli alums, is based on Mary Stewart’s 1971 children’s novel, The Little Broomstick. It follows Mary, a young girl stuck in a rural British village with her aunt and no friends, who discovers a magical flower that transports her to a school for witches above the clouds.

Produced by Yoshiaki Nishimura and directed by Hiromasa Yonebayashi, Mary and The Witch’s Flower had its Japanese theatrical release last year, followed by an international rollout back in January. It never made it to India though, so this is your chance to catch the film. If you’re a purist, make sure you get the subtitled version, but if you prefer English dub, you’ll get to hear Kate Winslet and Jim Broadbent.

It’s been received warmly by critics. The Verge’s Tasha Robinson said “it feels like a complete continuation of [Ghibli]’s work. It’s a welcome relief for every animation fan who thought that particular era of Japanese animation had, after 30 years, quietly come to a close.” Uproxx’s Keith Phipps called it “a visually stunning fairy tale filled with whimsical ideas and warmly realized characters”.

How to access: Amazon US, Amazon Video US, Google Play US, iTunes US, or Microsoft Store US
Time commitment: 1 hour and 43 minutes

Other mentions:
Being Serena, a five-part look at tennis star Serena Williams’ career and pregnancy, starts Friday on HBO. NPR called it “a sweet, if incomplete, picture of greatness”, while Slate thinks it’s “an all-access pass to the tennis star’s life that provides no access to her heart or brain.”

Starz has a new series called Vida starting Sunday in the US. It’s about two estranged Mexican-American sisters who return home to the Eastside of Los Angeles after the death of their mother, and are confronted by the past. The New York Times thinks it “sometimes slips into melodrama, but the lapses pass quickly”, while EW noted strong performances.

It’s been a quiet week for streaming services. The only notable entries on Netflix were Captain America: Civil War, and the National Award-winning Masaan, while Amazon added Gone Girl, and Blood Diamond. Check out our monthly Netflix guide for more options.

Video games:
Donkey Kong Country: Tropical Freeze
Four years since its original release for the Wii U, Nintendo has released an enhanced port of well-received Donkey Kong Country: Tropical Freeze for the Switch, joining the ranks of Mario Kart 8 among others. The updated version allows you to play as Funky Kong, who has five hit points as opposed to Donkey Kong’s two, can double-jump, hover in mid-air and breathe underwater.

Tropical Freeze is the fifth entry in the Donkey Kong Country series, and a direct sequel to the 2010 Wii game Donkey Kong Country Returns. As the player, you must help Donkey Kong and his friends – Diddy Kong, Dixie Kong, and Cranky Kong – to win back their home from the Snowmads, a group of Viking-themed arctic animals.

GameSpot’s Peter Brown called it “a fantastic platformer that's bursting with creativity and expertly designed challenges. It's tuned just right -- always tough but rarely frustrating -- to ensure that even the most common moments feel great.” IGN’s Seth G. Macy noted Funky Mode “makes it more accessible without reducing the formidable platforming difficulty to a walk in the park”.

Music:
Dirty Computer by Janelle Monáe
Five years since her last album, between which Monáe has done various film roles from Moonlight to Hidden Figures, the 32-year-old singer is back with her third full-length release, Dirty Computer, having released three singles from the 14-track record in preceding months. The album features appearances from the likes of Brian Wilson, Pharrell Williams, Zoë Kravitz, and Grimes, with contributions made by Prince just prior to his death.

In interviews prior to release, Monáe has spoken about how Dirty Computer is structured into three parts: Reckoning, Celebration and Reclamation. The first explores her acknowledgment of how she’s seen by society, the second deals with “the cards she has been dealt”, and the third with redefining the American identity. She also released a 46-minute short film alongside the album, which follows her android character, and also stars Tessa Thompson (Thor: Ragnarok).

Dirty Computer has gotten rave reviews from most critics. Writing for The AV Club, Danette Chavez said Monáe has “outdone herself in both the execution of this vision and its resonance”, while The Telegraph’s Neil McCormick thinks it’s “a contender for album of the year, in more ways than one” with the singer tackling “woke social consciousness” with “witty, interlinked songs”.