Mission: Impossible – Fallout, Orange Is the New Black, and More – The Weekend Chill 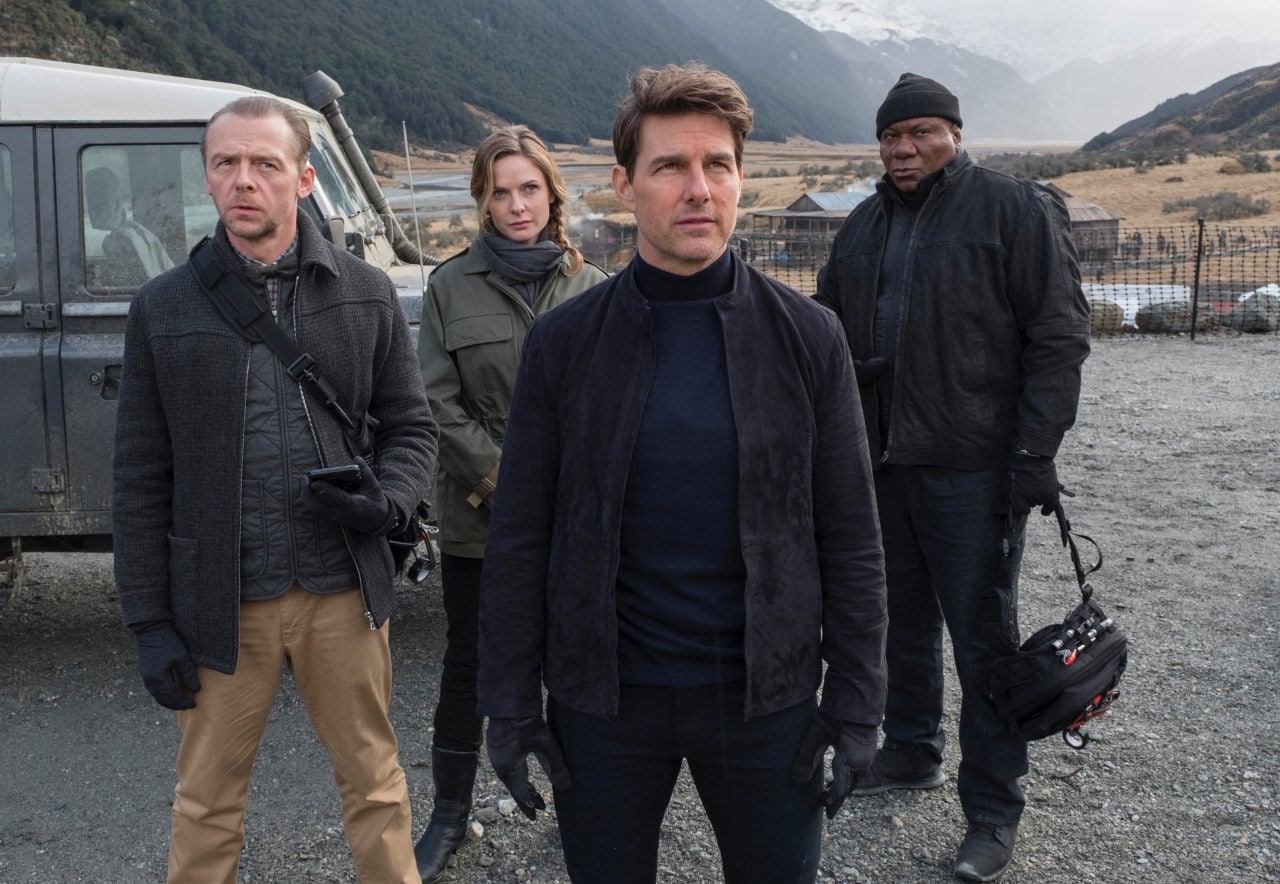 The 2018 San Diego Comic-Con continued last weekend, bringing news and trailers from across the pop culture spectrum. We got a peek at Star Trek: Discovery season 2, Fantastic Beats: The Crimes of Grindelwald, Godzilla: King of the Monsters, Shazam!, Aquaman, and Netflix and Matt Groening’s Disenchantment. Meanwhile, there was casting news for Spider-Man: Into the Spider-Verse and Amazon’s Good Omens.

On Monday, Fox released a new trailer for Alita: Battle Angel, the long-gestating and oft-delayed adaptation of the Japanese manga from James Cameron and Robert Rodgriguez. It’s out December 21. On Tuesday, two new reports said that Robert De Niro and Frances Conroy are in talks to join the standalone Joker origin movie, starring Joaquin Phoenix and slated for a October 2019 release date.

On Wednesday, Hulu gave us the first trailer for its Sean Penn-starrer mission-to-Mars drama The First, from House of Cards creator Beau Willimon and premiering September. Netflix, meanwhile, has acquired the popular web series Little Things starring Mithila Palkar, and has ordered a second season.

Later that day at the start of the summer 20018 press tour of the Television Critics Association, HBO revealed that Game of Thrones’ eighth and final season would premiere in the first half of 2019. Given the Emmys eligibility period runs till the end of May and Game of Thrones season 8 is going to have just six episodes, the latest start date for the show should be the second week of May.

Movies
Mission: Impossible – Fallout
Three years since its last instalment — in fact, the shortest gap between two entries in the series — Tom Cruise is back as IMF agent Ethan Hunt in what is the first direct Mission: Impossible sequel, in the hands of returning writer-director Christopher McQuarrie. There are several familiar faces in Simon Pegg, Ving Rhames, Rebecca Ferguson, Alec Baldwin and even Michelle Monaghan.

Henry Cavill, Angela Bassett, and Vanessa Kirby are new to the cast of Mission: Impossible – Fallout, playing a CIA agent, CIA director, and an arms broker, respectively. The film’s plot finds Hunt and his team setting off on a globe-trotting adventure from Europe to Kashmir, to retrieve three plutonium cores that were lost in an earlier mission.

Mission: Impossible – Fallout has gotten terrific reviews from critics, including us. It’s got thrilling action set-pieces that don’t lack in variety, attention to detail, and staging. And it benefits heavily from Cruise’s willingness to push himself and insist on doing his own stunts, no matter how crazy. It’s possibly the best film in the franchise’s history, and thoroughly entertaining even with its more sombre tone.

How to access: Out in cinema halls
Time commitment: 2 hours and 27 minutes

Ready Player One
Steven Spielberg directs Ernest Cline’s 2011 novel of the same name, set in a dystopian 2045 where humanity escapes the desolation of reality by plugging into the OASIS, an expansive virtual reality universe where anyone can be anything. Ready Player One follows teenager Wade Watts (Tye Sheridan), as he sets out to complete a quest created by OASIS founder James Halliday (Mark Rylance), the winner of which will get full ownership of the world.

This sparks a contest that grips the entire world, including a massive conglomerate led by Nolan Sorrento (Ben Mendelsohn), who wishes to monetise OASIS to maximise profits for his company. The book is more famous for its endless pop culture references, and Spielberg brings that quality to screen in eye-popping fashion, creating thrilling action set-pieces that involve everything from King Kong to Mechagodzilla.

We weren’t too pleased with the film, noting its lack of character and story depth, an inauthentic and cliched romance between the two lead protagonists, and being simply content with pushing the nostalgia button. For some though, the latter in the hands of Spielberg may well be enough. Critical consensus is slightly better: 73 percent fresh on Rotten Tomatoes, and barely holding the green rating with a 64 score on Metacritic.

How to access: Amazon IN, Google Play IN, Hooq, iTunes IN, or YouTube IN
Time commitment: 2 hours and 20 minutes

TV
Castle Rock
J.J. Abrams and Stephen King serve as executive producers on this psychological horror series based on the written works of the latter, which brings together characters and themes from the eponymous fictional town. The story kicks off with death row attorney Henry Deaver (Andre Holland) who returns to his hometown of Castle Rock, after receiving a call from Shawshank State Penitentiary.

The show has favourable reviews. Vox’s Karen Han said it “manages to capture the fear that comes from recognising” [King’s abstract monsters] but it should stay away from “more conventional horrors lurking just offscreen”. Rolling Stone’s Alan Sepinwall praised the performances and thinks it unfolds too slowly but comes into its own deep into the season.

Orange Is the New Black
Netflix’s longest-running original from creator Jenji Kohan enters its sixth year Friday, with many of the ladies of Litchfield Penitentiary being moved to maximum security after the events of the fifth season, which took an ambitious swing as it expanded the three-day prison riot to all 13 episodes, owing to the death of Poussey Washington (Samira Wiley) in season four.

The new season of the prison dramedy is getting better reviews than last year. Variety’s Caroline Framke called it “a marked improvement on season 5. In fact, it’s even pretty good. But it also ends up highlighting the series’ overall weaknesses, making it [clearer] than ever just how frustrating it is when a show with this much promise loses sight of what could make it great.”

Writing for The Hollywood Reporter, Dan Fienberg said the story is “more focused and on a smaller scale than what was attempted last year, which isn't entirely unwelcome. But it's not always clear which big issues and ideas the writers set out to address in the new season.” Thanks to the large ensemble, “ripping dialogue and great performances”, Fienberg said it’s easy to focus on what works.

Video games
Mega Man X Legacy Collection 1 + 2
Between 1993 and 2004, Capcom released eight mainline entries in its Mega Man X series — named X, X2, and so forth — which continued the story of Mega Man and introduced new gameplay features such as the ability to cling to walls and armour upgrades, even bringing new playable characters in future instalments. Fourteen years on, it’s re-releasing those eight in separate collections.

Mind you, these are not remasters. Capcom is merely bringing them to newer audiences on newer platforms, given the Mega Man X series was first made in the era of SNES, PlayStation and PS2, Game Boy Color, GameCube, and of course PC. Now, you can play all eight titles on modern consoles and PC with the same 16-bit and 32-bit graphic feel for the first four, and 3D models for the next four titles.

There are a couple of welcome additions, as we noted in our review of Mega Man X Legacy Collection 1 + 2, in a new easier level of difficulty called “Rookie Hunter Mode” making the games more accessible, and a “Museum” feature where you can browse through original artwork, collectible merchandise, and even a music player. If you’ve never played them before, it’s worth it.

How to access: PlayStation 4, Steam for PC, Nintendo Switch, or Xbox One
Time commitment: 34 hours

Other mentions
The award-winning strategic role-playing Banner Saga series, known for its strong story and characters, came to its conclusion this week with the release of The Banner Saga 3. It has an average score of 86 score on reviews aggregator Metacritic from 24 publications. The Banner Saga 3 is available on PC, PS4, Switch, and Xbox One.

Hive Mind has received much praise from critics. Writing for Paste Magazine, Madison Desler called it “an even-keeled, laid-back drift in and out of The Internet’s signature and sophisticated soundscape. Sprinkled with codas and half-songs, the effect is natural, not jarring, like turning down an alley, or rounding a city street and stumbling into another story.”

Pitchfork’s Sheldon Pearce said it’s “a peak example of their combined powers” and the “egalitarian spirit and anti-hierarchical approach to song-making fuels the sleekest, most robust music of their career”. He added: “It simplifies and shores up the Internet sound with soft-focus blues, plush arrangements, and deep-in-the-ground grooves. The beats are shapelier, more boldly defined, and yet they still have the capacity to bleed into each other.”