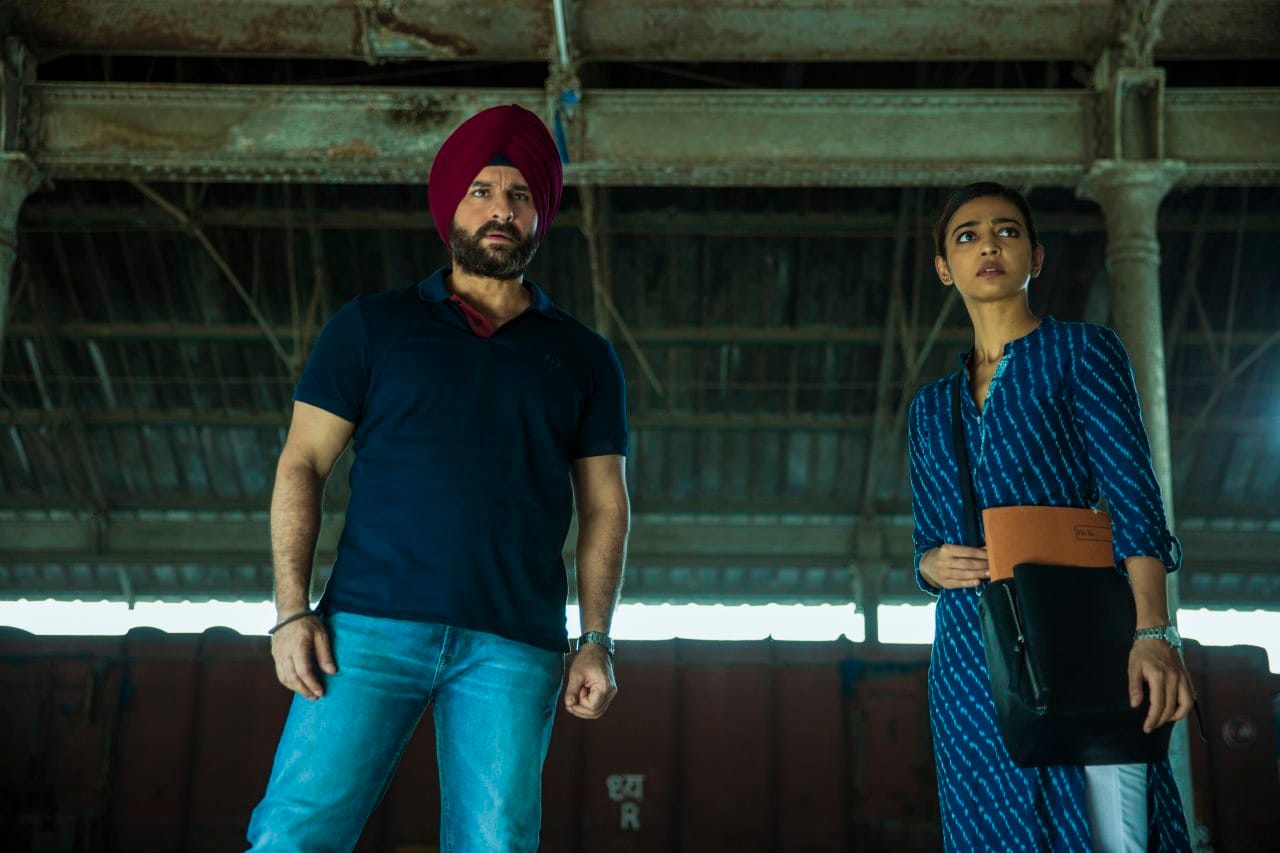 Fast and Furious spin-off Hobbs and Shaw – centred on Dwayne Johnson and Jason Statham – added two new cast members this week: Vanessa Kirby (The Crown) as Shaw’s sister, and Idris Elba (Luther) as the chief villain. Hobbs and Shaw is slated to release in July 2019.

On Thursday, a now-deleted tweet from a Disney France employee revealed that Star Wars Resistance – the upcoming animated series from Star Wars Rebels creator Dave Filoni – will be out in October. We’ll need to wait on official confirmation to find out whether that’s true or not.

Lastly, the upcoming animated film Spider-Man: Into the Spider-Verse will have Nicolas Cage voicing Spider-Man Noir, an alternate Spidey from the 1930s, per a new report. Given the film features a multi-verse, expect more guest stars to be revealed as the December release date approaches.

TV
Sacred Games
Nearly two and a half years since its foray into India, Netflix's first locally-produced original is here. It’s based on Vikram Chandra's sprawling 2006 novel of the same name, which revolves around the intersecting lives of Mumbai city cop Sartaj Singh (Saif Ali Khan) and crime lord Ganesh Gaitonde (Nawazuddin Siddiqui), the latter of whom has been missing for 16 years at the start of the series.

Sacred Games is getting good reviews from critics, including us. Siddiqui is central to that praise for his performance, while the directing duo make great use of streaming services’ free pass when it comes to certification, cramming in political references and statements as they please. The only problems we had were pacing troubles and a tendency to rely on clichés.

Sharp Objects
Summer isn’t usually the period for prestige TV with film stars in the lead, but that’s not stopping HBO. Amy Adams returns to TV after 12 years in this eight-part miniseries based on Gone Girl author Gillian Flynn's debut novel of the same name, playing a crime reporter who returns to her hometown after being discharged from a psychiatric hospital, and starts investigating the murder of two young girls.

Flynn co-wrote the show with Marti Noxon (UnREAL), which has been directed in entirety by Emmy-winning Jean-Marc Vallée (Big Little Lies). Patricia Clarkson plays the mother of Adams’ character, and the series also stars Chris Messina, Elizabeth Perkins, Matt Craven, Madison Davenport, and Eliza Scanlen. Sophia Lillis (It) plays a younger version of Adams’ character. The show premieres Sunday in the US and will be available starting Monday in India.

Critics like what they’ve seen of Sharp Objects. The New York Times’ James Poniewozik called it mesmerising and added the show “relies on internal drama and a transfixing Ms. Adams, who lays Camille’s ragged soul bare with sardonicism and self-loathing”. IndieWire’s Ben Travers said the protagonist is “covered in clichés” but “Adams is so subdued in every other measurable quality, her character never spills over into farce”.

How to access: HBO or Hotstar
Time commitment: 1 hour, weekly

Movies
Isle of Dogs
Writer-director Wes Anderson returns to stop-motion feature filmmaking after nine years with this tale of a dystopian near-future Japan where an outbreak of canine flu has forced dogs to be quarantined on a vast garbage dump called Trash Island. A 12-year-old boy (Koyu Rankin) journeys there to rescue his dog Spots (Liev Schreiber) and gets help from a pack of misfit canines who now live there.

The boy’s love for his dog sets him on an epic journey that will decide the fate and future of the entire Prefecture. The dogs are voiced by the likes of Bryan Cranston, Edward Norton, Bill Murray, Scarlett Johansson, Tilda Swinton, Jeff Goldblum, Bob Balaban, Greta Gerwig, Yoko Ono, F. Murray Abraham, and Frances McDormand.

Isle of Dogs has terrific reviews. The Atlantic’s Christopher Orr said: “It’s true that Isle of Dogs is a film about scapegoating, political hysteria, and deportation. But it is also — and at its best — a film about dogs.” Writing for Wall Street Journal, Joe Morgenstern said it has “astonishing images, tells a touching tale of outcast dogs and a faithful boy, and does so with ultra-lively deadpan wit.”

How to access: Out in cinema halls
Time commitment: 1 hour and 41 minutes

Sicario: Day of the Soldado
The critical success of the 2015 original, from Blade Runner 2049 director Denis Villeneuve and starring Emily Blunt, gave rise to an unlikely and unnecessary sequel which doesn’t involve the two. Instead, Suburra director Stefano Sollima steps into the picture, and the script from returning scribe Taylor Sheridan puts a heavier focus on Benicio del Toro (Star Wars: The Last Jedi) and Josh Brolin (Avengers: Infinity War).

The plot for Sicario 2 reads like this: “The cartels have begun trafficking terrorists across the US border, forcing federal agent Matt Graver (Brolin) to call upon the mysterious Alejandro (del Toro) to escalate the war in nefarious ways.” Jeffrey Donovan returns and is joined by child star Isabela Moner (Transformers: The Last Knight) and Matthew Modine (Full Metal Jacket).

Day of the Soldado isn’t as good as Sicario, with critics pointing out the pacing issues and the “amoral machismo”. Writing for The Hollywood Reporter, Todd McCarthy said Sheridan’s “compelling new yarn” brings great work from del Toro and Brolin, while Vulture’s Emily Yoshida thinks the violence contributes to the hopelessness, but also takes away from “heroism or character investment”.

How to access: Out in cinema halls
Time commitment: 2 hours and 2 minutes

Other mentions
In addition to Sacred Games, Netflix’s original line-up this week also includes a new season of Jerry Seinfeld’s Comedians in Cars Getting Coffee. Over in acquisitions, you’ve got the first five Fast and Furious films, Pixar’s Cars, and the mockumentary comedy Popstar: Never Stop Never Stopping.

Video games
Just over a year since its release on PS4, Crash Bandicoot N. Sane Trilogy – a collection of remasters of the first three titles in the series, originally developed and released between 1996 and 1998 – is now available on the Nintendo Switch, PC, and Xbox One. We’ve got a review for the Switch version, if you’re interested.

Music
I’m All Ears by Let’s Eat Grandma
The art-pop British duo comprising of 19-year-old childhood friends Jenny Hollingworth and Rosa Walton are back two years since their full-length debut for a second album in I’m All Ears, released last Friday to acclaim from all corners, on the back of four singles – “Hot Pink”, “Falling Into Me”, “It’s Not Just Me”, and “Ava” – in the preceding months.

With production from the likes of Faris Badwan, SOPHIE, and David Wrench, the 11-track record varies widely in song length, going from interludes under a minute to multiple tracks that run well over eight minutes. Pitchfork’s Meaghan Garvey called it “future-pop at its best” with “incisive lyrics that swirl into marvellous, breath-taking songs”.

Over at The Guardian, Laura Snapes noted “their songs are mini odysseys that intertwine rave-y euphoria and menace” with “bold synths sharpened with a diamond lathe; sights trained on anyone who would underestimate teenage girls”. The album “is about abandoning fear and leaping boldly towards desire. It is remarkable,” she concluded.