No Time to Die is the first Bond movie of the post-MeToo era Hollywood. 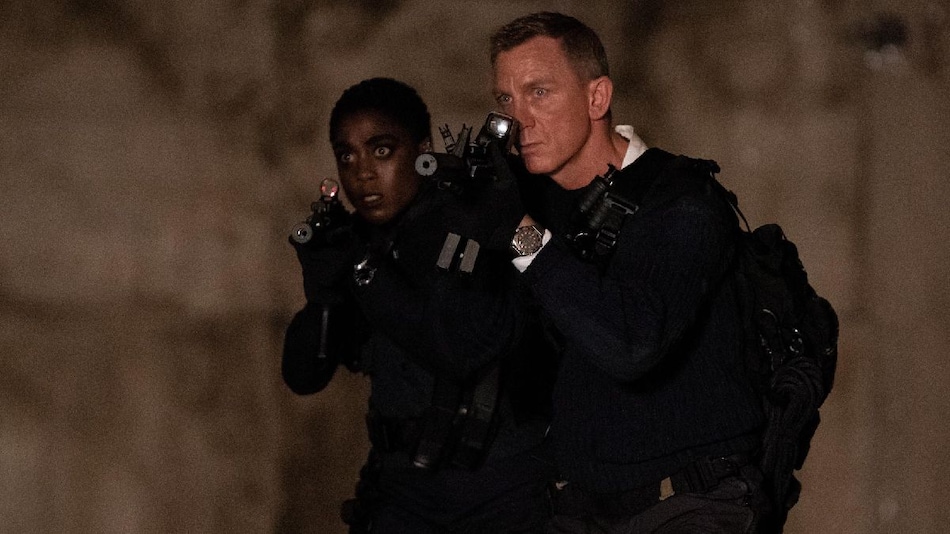 Lashana Lynch and Daniel Craig in No Time to Die

No Time To Die, the latest in the James Bond movie franchise is all set to release in India this week — finally. Previously scheduled premieres, in March and November 2020, and again this April, were all cancelled due to the ongoing coronavirus pandemic. No Time To Die is the 25th official Bond film and Daniel Craig's fifth and final movie playing the super spy James Bond, Agent 007. The Bond movie was filmed in Norway, Italy, and Jamaica.

No Time To Die will see Bond drawn out of his retirement in Jamaica by old friend Felix Leiter, played by Jefrrey Wright. Bond is asked to embark on a perilous mission to rescue a kidnapped scientist. Best actor Oscar winner Rami Malek plays Bond's adversary Safin. Lashana Lynch plays the new 007 working alongside an ageing Bond. The returning cast includes Léa Seydoux returns as Madeleine Swann, who played Bond's love interest in the previous installment of the franchise, Spectre.

For Craig, No Time To Die is his swansong playing James Bond in the famous spy franchise. Craig first took on the role of the super spy in 2006 with Casino Royale. He later appeared in Quantum of Solace in 2008, Skyfall in 2012, and Spectre in 2015.

Danny Boyle, the Oscar-winning director of Slumdog Millionaire who was originally slated to direct the movie, exited in 2018 citing apparent ‘creative differences' as the reason. Bond producer Barbara Broccoli told Variety in an interview that the exit was hard on both sides, but they had come to the conclusion that they were not aligned about the kind of movie they wanted to make.

The producers of the movie Broccoli and Michael G. Wilson scrapped the script that Boyle had been working on with his collaborator, John Hodge. Cary Joji Fukunaga, director of True Detective and Beasts of No Nation was later roped in to direct the film. Screenwriters Neal Purvis and Robert Wade, who have co-written the script of Bond movies since The World is Not Enough in 1999 were tapped to write a new script for No Time To Die.

British actress and writer Phoebe Waller-Bridge was brought on board for the script to help improve the portrayal of women, after repeated claims of misogyny and sexism.

With that, here's everything you need to know about No Time to Die, including its full cast and crew, the teasers and trailers, and when you can see it where you live.

No Time to Die release date

No Time to Die premieres in Indian theatres on Thursday, September 30. Argentina, Austria, Brazil, Chile, Colombia, Denmark, Finland, Ireland, Singapore, and the UK are some of the other countries apart from India that will see the release of the movie on September 30.

We're only days away from the spectacle that is #NoTimeToDie in 3D. Get your tickets already as it hits the theatres in English, Hindi, Tamil, Telegu, and Kannada on 30th September. Book tickets now: https://t.co/p6INhts4Hx#DanielCraig #JamesBond pic.twitter.com/rKGy0MNTO4

That follows from the new Bond film's premiere at the Zurich Film Festival in Switzerland and in the UK on September 28. Belgium, South Korea, Monaco, and Austria will see the movie release on September 29.

No Time to Die will release for its UAE and New Zealand fans on Thursday, October 7. In the US and Canada, the new Bond movie rolls out Friday, October 8.

Bond fans in China and Australia will have to wait for another month as No Time to Die will roll out in these countries only by October 29 and November 11, respectively.

No Time to Die cast

No Time to Die sees Daniel Craig returning to play Agent 007 for the final time. When he took over the role from Pierce Brosnan in 2006, the blond-haired, blue-eyed actor seemed far removed from the character created by writer Ian Fleming. But Craig later proved his doubters wrong and allowed the multimillion-dollar franchise to be rebooted with a harder edge, inspired in part by the Jason Bourne franchise. Craig had caused controversy in 2015, when he said that he'd rather slash his wrists than do another Bond movie, during an interview with TimeOut.

Rami Malek, who won the lead actor Oscar for portraying the British rock band Queen's lead singer Freddie Mercury, plays newest Bond villain Safin. A video uploaded on the James Bond 007 YouTube channel gives a deeper look into Malek's character. Malek says in the video, “What I really wanted from Safin was to make him unsettling, thinking of himself as being heroic.” The franchise director Fukunaga elaborated further about Safin, “What he wants and what he is willing to do makes him a very frightening character.”

Rami Malek in No Time to Die
Photo Credit: 007.com

No Time to Die is also bringing back characters from all across Daniel Craig's run as James Bond.

The main returning cast includes Léa Seydoux as Madeleine Swann who is Bond's love interest, Jeffrey Wright as CIA agent Felix Leiter, Ralph Fiennes as Gareth Mallory, or M, the head of MI6, Ben Whishaw as MI6's quartermaster Q who distributes technology for the agents to use on their mission, Naomie Harris as an MI6 field agent turned M's secretary Eve Moneypenny, Rory Kinnear as M16's Chief of Staff Bill Tanner, and Christoph Waltz as Ernst Stavro Blofeld, the leader of the worldwide crime syndicate Spectre. Ernst Stavro Blofeld was the main villain in Spectre, the last installation of the franchise. Brigitte Millar also returns as Doctor Vogel, a member of Spectre.

Since the release of the first trailer, speculations have been going on about Swann's connection to Bond's adversary, Safin and the ‘secrets' that she is harbouring. There were also talks about a possibility that Moneypenny may return to aid Bond in No Time to Die.

The cast also includes Lashana Lynch who plays Nomi, an MI6 agent. Nomi is the new 007 after Bonds retires. "I didn't feel like Nomi, as a young Black woman, was constantly standing behind the white guy, which, for me, is job done," Lynch told The Hollywood Reporter. "And that was a very conscious decision for Cary."

Ana de Armas plays CIA agent Paloma in No Time to Die. Talking about her role as Paloma to The Sun, Armas explained: “Paloma is a really complete character. She's definitely something else that I don't think we've seen in other Bond girls in previous movies. She's a lot of fun — very active, very badass.”

No Time to Die is directed by Cary Joji Fukunaga. He was roped in for the project following Danny Boyle's exit. Fukunaga has directed movies including the 2010 adaptation of Jane Eyre and Beasts of No Nation starring Idris Elba. One of the biggest challenges for Fukunaga was to develop James Bond's character to fit Hollywood post-MeToo era reality.

“'Is it Thunderball or Goldfinger where, like, basically Sean Connery's character rapes a woman?' 'She's like ‘No, no, no,' and he's like, ‘Yes, yes, yes.' That wouldn't fly today.” Fukunaga said during an interview with The Hollywood Reporter.

Daniel Craig and Cary Joji Fukunaga on the set of No Time to Die
Photo Credit: 007.com

British comedy-drama series Fleabag's creator Phoebe Waller-Bridge was also brought in to work on the draft of the screenplay, which was developed by Fukunga, Purvis, and Wade. Purvis and Wade have co-written seven James Bond movies since 1999's The World is Not Enough. Their first work for Craig as Bond, Casino Royale, was nominated for a BAFTA Award for Best Adapted Screenplay.

Fukunaga dismissed the perception that Waller-Bridge was brought in to make the script more woke. “From my very first conversations with [Broccoli], that was a very strong drive. You can't change Bond overnight into a different person. But you can definitely change the world around him and the way he has to function in that world. It's a story about a white man as a spy in this world, but you have to be willing to lean in and do the work to make the female characters more than just contrivances” the director said.

No Time to Die is produced by EON Productions' Barbara Broccoli and Michael G. Wilson. Broccoli and Wilson have been producing Bond movies since 1995's GoldenEye. The cinematography of the movie was by Linus Sandgren. The movie was edited by Tom Cross and Elliot Graham. Mark Tildesley was behind the production design and the costume design was by Suttirat Anne Larlarb.

No Time to Die trailer

The first trailer of No Time to Die came out in December 2019. Three previously scheduled premieres of the movie had to be cancelled following the coronavirus pandemic. The movie was first to premiere in March 2020.

No Time to Die synopsis

In No Time To Die, Bond has left active service and is enjoying a tranquil life in Jamaica. His peace is short-lived when his old friend Felix Leiter from the CIA turns up asking for help. The mission to rescue a kidnapped scientist turns out to be far more treacherous than expected, leading Bond onto the trail of a mysterious villain armed with dangerous new technology.

No Time to Die review

No Time to Die reviews are expected soon following the Switzerland and London premiere of the movie.

Music has been crucial to the James Bond Franchise. From the classic tunes of Shirley Bassey and Paul McCartney to Adele and most recently Billie Eilish, the theme songs have gone on to mark out the evolution of pop music over the years. Adele's “Skyfall” in 2012 and Sam Smith's “Writing's on The Wall'' in 2015 went on to win the Oscar for the best song.

At 18-years-old, Billie Eilish became the youngest pop star to perform a Bond theme with “No Time to Die”, which she co-wrote with her brother Finneas O'Connell. “It feels crazy to be a part of this in every way,” Eilish said in a prepared statement. “To be able to score the theme song to a film that is part of such a legendary series is a huge honour.”

The background music for the movie was scored by Oscar-winning music composer Hans Zimmer, who is known for his work in movies such as Dune and Interstellar.

The lyrics of “No Time to Die” hints at a betrayal from a loved one:

No Time to Die poster

Here is the official poster of No Time to Die: