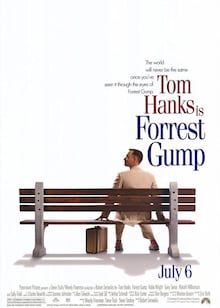 Forrest Gump (Tom Hanks), an exceptionally fast runner who once wore leg braces, recounts his life's story to strangers who happen to sit next to him on the bench at a bus stop. He shares how his heart was broken by his only female friend and how he even ran a marathon.