“All I ever wanted was a normal life.” 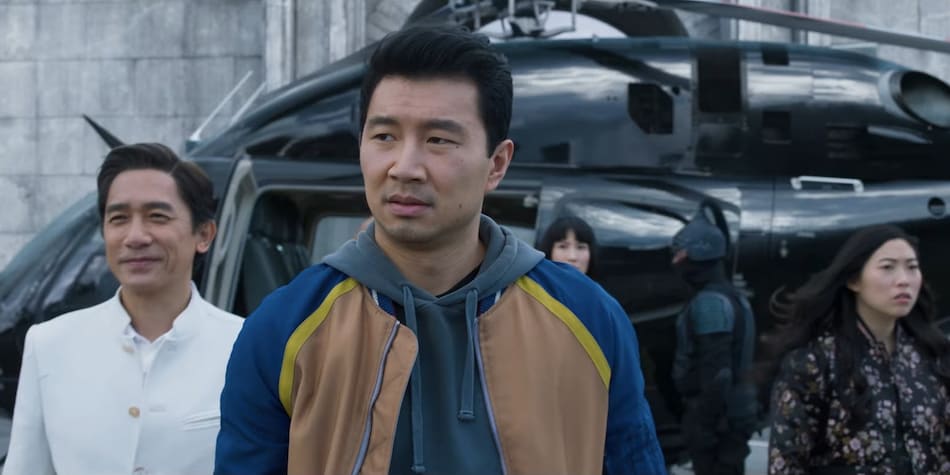 Shang-Chi has a new teaser trailer. With the new Marvel movie out in a little more than five weeks, Marvel Studios has unveiled a fresh one-minute look at Shang-Chi and the Legend of the Ten Rings, that further builds up the conflict between father and son — that's Shang-Chi (Simu Liu) and Wenwu (Tony Leung) aka The Mandarin — as well as the path that the son is determined to take. Destin Daniel Cretton (Short Term 12) is the director on Shang-Chi, with Marvel Studios president Kevin Feige and Jonathan Schwartz as the producers.

“What happened to your shirt?” Katy (Awkwafina) asks a shirtless Shang-Chi (Liu) at the start of the new Shang-Chi teaser, as he awaits his opponent for a rooftop brawl of sorts. As the camera lingers on Liu's face and upper half, Shang-Chi adds in voiceover: “All I ever wanted was a normal life.” What's a normal life, one with a shirt on? Elsewhere, Shang-Chi's father Wenwu (Leung) adds: “My son, the Ten Rings gave our family legendary power. Show me you're strong enough to carry that.”

The new Shang-Chi trailer then cuts to give us more glimpses of the San Francisco bus fight, where the mercenary Razor Fist (Florian Munteanu) goes after Shang-Chi. The fight ends with the bus splitting in two, Shang-Chi jumping into one half while pushing his combatant into the other. “I'm nothing like you,” Shang-Chi tells his father in a different scene. In a separate shot, Shang-Chi says: “I thought I could my name. Start a new life.”

“You can't outrun your destiny,” Wenwu says in response — though it's part of another conversation — in the new Shang-Chi teaser that runs through some big-ticket moments, ending with Shang-Chi being greeted by a sea monster underwater. “I'm not afraid of you,” Shang-Chi tells his dad, as the new Shang-Chi trailer ends with the two squaring up for battle.

In addition to Liu, Awkwafina, and Leung, Shang-Chi and the Legend of the Ten Rings stars Michelle Yeoh as a guardian called Jiang Nan, Fala Chen as Jiang Li, Meng'er Zhang as Shang-Chi's estranged sister Xialing, Ronny Chieng as Shang-Chi's friend Jon Jon, Benedict Wong as Wong from Doctor Strange, and Jade Xu as a Widow from Black Widow. The masked villain Death Dealer is also part of Shang-Chi.

Shang-Chi and the Legend of the Ten Rings is out September 3 worldwide.