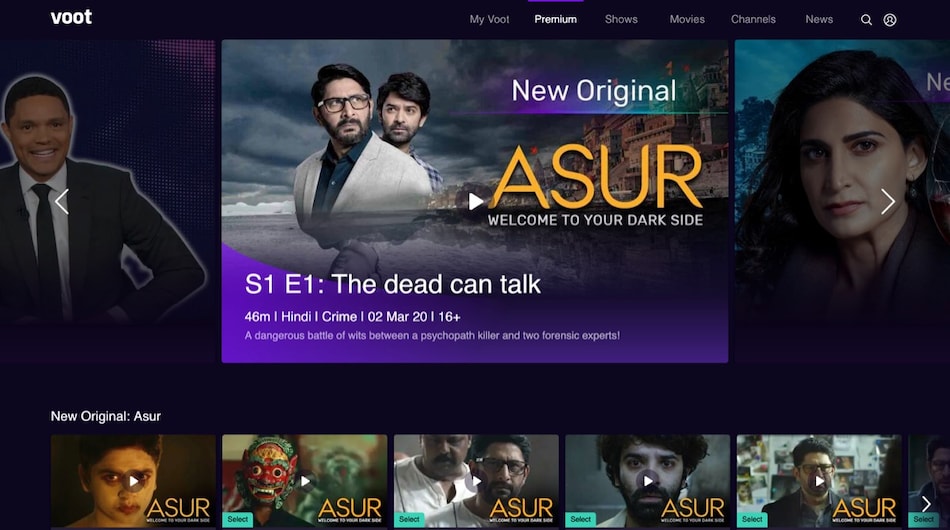 Voot Select will directly compete with the likes of Hotstar, Netflix, and Amazon Prime Video

A year and a half after it was first promised, Viacom18-owned Voot has finally launched its subscription-based tier, that will directly compete with the likes of Hotstar, Netflix, and Amazon Prime Video. Voot Select — which has been in soft-launch mode for a while — will cost Rs. 99 a month after a three-day free trial, or Rs. 499 for the full year after a 14-day free trial. That puts it in line with its local competitors in ALTBalaji, Zee5, Eros Now, and SonyLIV, all of which are in and around the same price point. It's more affordable than the aforementioned international big two — though its catalogue is also no match.

For your money, you'll get ad-free access to originals and international shows. The first episode of any series will be available for free — like Apple TV+. Voot Select is launching with two new original series in the Arshad Warsi-led psychological horror Asur and the consent drama Marzi, starring Rajeev Khandelwal and Aahana Kumra. Originals aren't new to Voot — it announced over a dozen a while back, after all — but being behind a paywall is. Among the international line-up, Voot Select has a few shows that have never been available in India before, in the Jordan Peele-created The Twilight Zone reboot, the new Nancy Drew adaptation, and the family drama A Million Little Things.

Beyond that, your Voot Select subscription also grants you early access to TV programmes and select live channels under the Viacom18 banner. That means you can watch MTV Roadies a full 24 hours earlier, in addition to channels such as Colors, Colors Kannada, Colors Tamil, Comedy Central, MTV, Nick Jr, and Sonic. Voot Select also claims to have more than 1,500 movies across nine languages, which include Hindi, Tamil, Telugu, Bengali, Gujarati, Kannada, Marathi, and Tulu.

Voot Select is available in browsers, and under the Voot app on Android and Android TV, iPhone, iPad, and Apple TV, as well as Amazon Fire TV. Voot offers Chromecast support.