The Dark Knight at 10: Why It's One of the All-Time Great Movies 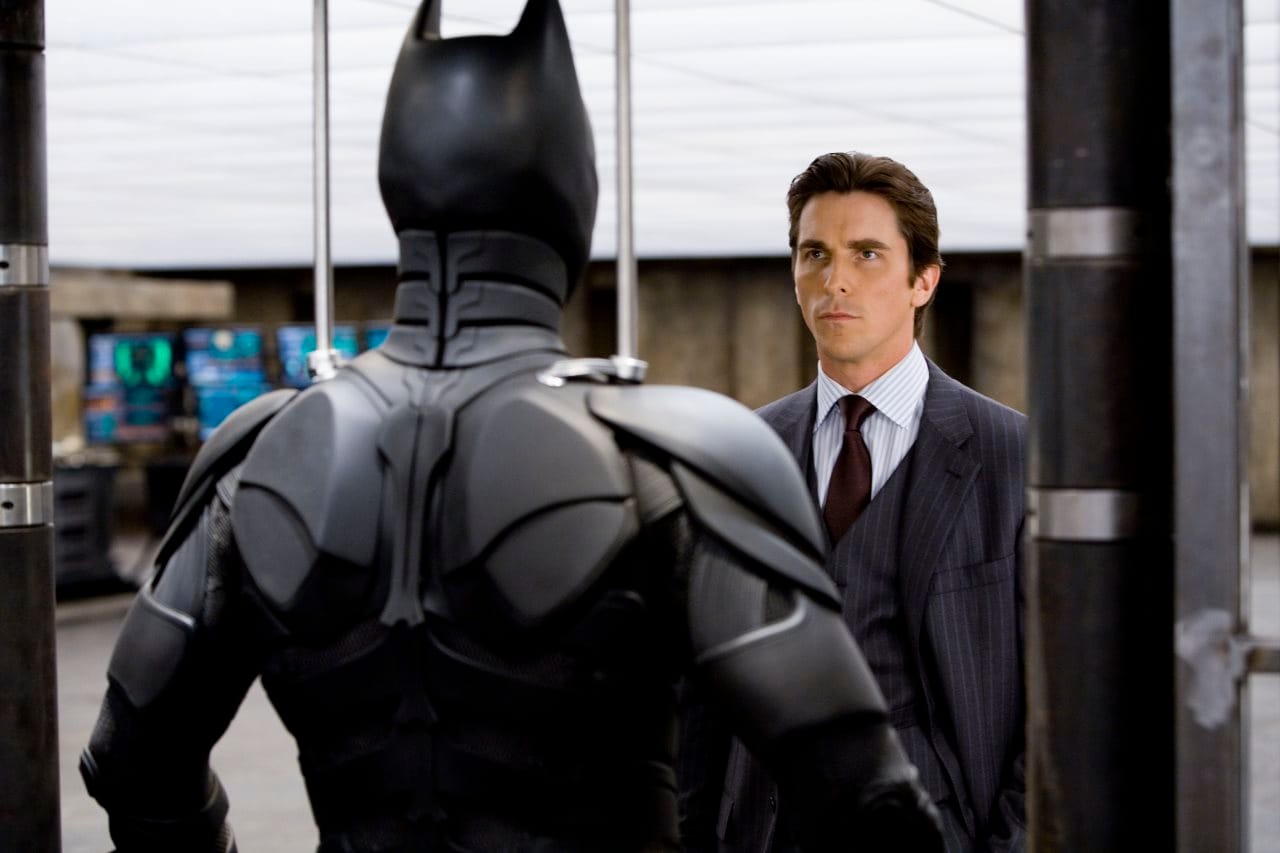 Christian Bale as Bruce Wayne in The Dark Knight

In July 2008, when Christopher Nolan’s The Dark Knight rolled into theatres across the world, it gave us a brilliant version of Batman’s nemesis – the Joker (Heath Ledger) – the best yet we’ve seen on screen since the character’s origin on page in 1940. Part of what made him so great was that he was an enigma throughout the film: not only were we not told anything about the Joker’s past, a deliberate move on part of the writers, but the truth of everything we do learn about him in the film also remains a mystery, given it’s impossible to tell whether he's lying or not.

Despite seeing him for over two hours, the Joker remains a stranger, something he alludes to in the first few lines he has in The Dark Knight. The only personal information he’s willing to cough up, about how he got his facial scars, is likely made-up considering his version of the events – one involving his parents and the other his wife – completely change the two times we get to hear his story. And what he does reveal about his personality, while talking to Harvey Dent (Aaron Eckhart) in the hospital, is a fabrication: The Joker wants us to think he doesn’t have plans, when in truth he’s got them aplenty.

Early into the film, the purple-suited villain shows up at an underground meeting of Gotham City’s finest thugs, convincing them to help him kill Batman (Christian Bale) and demands half the money they’ve got stashed away in return, though he wants neither of the two. Joker’s initial plan involves unmasking his identity, so he can get to the people Batman cares for, but that becomes unnecessary thanks to the latter’s actions at the Dent fundraiser, with Bruce showing how much he cares for Rachel. It’s why when a Wayne Enterprises employee is about to go public with what he has learned working at the company, the Joker puts a bounty on his head because he already knows what he needs, and the revelations will affect his own plans.

Though he describes himself as an agent of chaos, the Joker does go to certain lengths to make sure things go according to how he wants them. He’s a schemer too, just as he accuses the others of. And to ensure this, he lies at every step. Of course, his plans don’t have a larger purpose beyond upsetting the natural order of things – his motivations are described succinctly by Bruce’s caretaker Alfred (Michael Caine): “Some men just want to watch the world burn.” – which confound Bruce as he struggles to deduce the rationale behind his actions. And that’s what makes him the greatest villain for Batman, who’s ultimately pushed so far that he has to break to his one rule – he doesn’t kill – in the eyes of the public, to save the city.

Heath Ledger as the Joker in The Dark Knight
Photo Credit: Warner Bros.

But it’s not just the Joker character that made The Dark Knight so good. If that was so, 2016’s dumpster-fire Suicide Squad ought to have benefited from having Jared Leto as the unhinged villain. Rather, it was Ledger's performance that took the words penned by Christopher and his brother Jonathan Nolan and brought them to life in such a captivating and chilling fashion that his is not only the definitive portrayal of the character others are inevitably compared to, but a high bar for superhero villains that none have been able to surpass. One of the best Joker stories involves Caine, who revealed that he “forgot every line” when he first saw Ledger in character during a rehearsal of the fundraiser scene.

The highlight of his performance and in fact, the film is the interrogation scene with Batman, which gives The Dark Knight a rare opportunity for its primary characters to share screen space. While the dialogue lays bare the nature of the relationship between the protagonist and the antagonist (“You complete me,” the Joker says at one point), and conveys a filmmaking lesson in doing so – telling us that the best foe is one who attacks the hero’s greatest weakness – the scene acts as a showcase for Ledger to tap into the unsettling facets of a guy who cannot be frightened. People called for an Oscar nomination the moment they witnessed his work, and he went on to win it the following year posthumously, becoming the first (and only yet) comic-book movie actor to win an Academy Award.

It was one of two wins (alongside sound editing) out of eight nominations for The Dark Knight at the 2009 Oscars, and its surprise omission from the Best Picture nominees list was regarded as highly controversial, with the volume of outcry from all corners prompting the Academy to expand the list from the long-standing five to a possible 10. Meanwhile, the film garnered a billion dollars at the global box office, but the biggest thing it achieved was that it showed that superhero movies could be great movies, ones that take themselves seriously, hold up a mirror to society and even offer political commentary, in the right hands.

I will always remember the first time I saw The Dark Knight, though not entirely for reasons of the film. On 26 July 2008, a week after the film’s release in India and a day prior to my viewing, Ahmedabad – the city where I then lived as a teenager in high school – was rocked by a series of 21 bombings in the span of just over an hour, which killed 56 people and injured more than 200. The terrorists were strategic in their planning and placed two bombs near hospitals that the injured would be taken to. For the handful of people who ventured into the theatre including me, Joker blowing up a Gotham hospital turned into a reminder of something real and much more terrifying, and the city’s deserted streets with the army stationed at the mall served as a bizarre juxtaposition.

Christopher Nolan during the filming of The Dark Knight
Photo Credit: Warner Bros.

Though I fought my parents to attend that particular screening a day after a terrorist attack, I was only able to properly appreciate the film on later viewings, when the reality wasn’t as overwhelming (and my knowledge of film had grown beyond the limited confines of what a pre-broadband Internet age allowed). And a decade on from its theatrical release, it’s clear that Nolan – in one way or another – set the stage for the ascendancy of the superhero genre and made it a cornerstone of any Hollywood studio’s output. The Dark Knight delivered both mass appeal and hard-hitting storytelling, drawing on concerns of the US-led war on terrorism and mass surveillance, which also fuelled the Jason Bourne trilogy from 2002 to 2007, updated from its literary origins.

Many superhero films have since tried to copy its formula, but most have failed. The biggest fault for most of Warner Bros. and DC’s output since The Dark Knight has been the relentless focus to ground themselves in grittiness, either oblivious or uncaring of the aspects that matter more. Ledger’s work was just one of many reasons that catapulted the film into greatness. For one, the script was full of clever call-backs and foreshadowing, and had bits and pieces of humour in the right places – be it Bruce and Alfred referencing the former’s secret identity in front of Dent, or Lucius Fox (Morgan Freeman) being his usual quipping self – to offset the otherwise depressing nature of events on-screen.

It supplemented that with realistic action where people get hurt, not the over-the-top silliness that’s present in today’s superhero films. Plus, it was mostly shot with practical effects and not created digitally – the opening bank robbery sequence is a terrific set-piece, as is the James Bond-inspired sky hook-enabled kidnapping in Hong Kong – with filming partially done with 70mm IMAX cameras (a first for a movie then) further improving the viewing experience. And The Dark Knight had terrific sound design: Hans Zimmer’s bombastic score shook you to the core, while the effective use of an auditory illusion – the Shepard scale – seemed to constantly escalate the tension, a complement to what Nolan considers as an important theme (escalation) of the film.

Crucially, The Dark Knight is not only memorable unlike many of its counterparts tend to be these days, but it’s rewatchable. The film rewards you on multiple viewings, and even though the superhero genre has exploded since – Iron Man released in the same year, and we’ve had 19 more instalments from Marvel alone since – it has stood the test of time and belongs in the pantheon of all-time greats. And even now a decade later, it continues to inspire other movies including this year’s Black Panther – which has come closest to mainstream acclaim for a superhero film since Nolan’s work – with both director Ryan Coogler and actor Michael B. Jordan admitting that Gotham City and the Joker influenced their respective works.