Marvel’s What If…? Review: A Footnote in the MCU Encyclopaedia 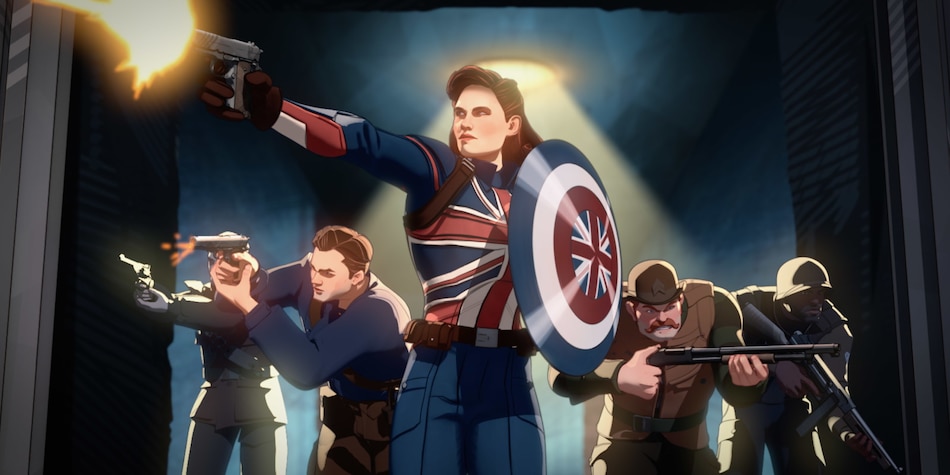 Hayley Atwell as Captain Carter (centre) in What If…?

What if Steve Rogers' love interest Peggy Carter took the Super Soldier serum? What if the Wakandan prince T'Challa ended up becoming Star-Lord? What if Nick Fury's big week was even busier and more chaotic? What if all of the Avengers, from Iron man to Spider-Man, were zombies? These are the kind of hypothetical questions asked by Marvel's What If…? — premiering Wednesday on Disney+ and Disney+ Hotstar — a new animated anthology series with half-hour long episodes that at times feels like the least consequential Marvel Studios project ever. Some of that is because we're being treated to one-off adventures (in many cases), and some owing to the fact that What If…? won't have any effect on the rest of the Marvel Cinematic Universe.

Hardcore fans will want to know this: the new Marvel series is non-canonical. While every film and TV show we've seen previously — from Avengers: Endgame to WandaVision — took place in the same universe, What If…?'s events don't. Instead, they are happening in parallel universes. This flows naturally out of the most recent Marvel series, Loki. Spoiler alert if you haven't finished watching all six episodes of its first season. Loki ended with the Sacred Timeline split into an infinite number of branches, giving rise to a multiverse of possibilities. Pre-Loki, these “what if?” scenarios would've been clipped by the Time Variance Authority, because they “weren't supposed to happen.” Now they can roam wild. Captain Carter? Or a benevolent Star-Lord? Why not.

Though What If…? cannot change the MCU, it benefits from it. After all, over four dozen Marvel stars return to reprise their roles in voice form, including Chris Hemsworth (Thor), Tom Hiddleston (Loki), Benedict Cumberbatch (Doctor Strange), Samuel L. Jackson (Nick Fury), Mark Ruffalo (Hulk), and the late Chadwick Boseman (Black Panther). Not everyone is back though, including some of the biggest ones in Robert Downey Jr. (Iron Man), Chris Evans (Captain America), and Scarlett Johansson (Black Widow).This might have been due to COVID-induced scheduling reasons or just too much money for Disney to throw at an animated series. But it's honestly not that much of a problem, exactly because it's an animated series — you're not looking at the same face with a different voice.

Marvel's What If…? trades heavily on what we already know about their characters, making quips about their MCU fates (“You almost ripped my arm off,” Sebastian Stan's Bucky Barnes says in one episode) or upending the dynamics we've previously witnessed (imagine a new spin on the villains from Avengers: Infinity War, or a bigger role for a minor Guardians of the Galaxy character). Elsewhere, What If…? indulges in mirror storytelling and role reversals, a bit like how Star Trek's Mirror Universe operates. What if the good guys were the bad guys? And what if the bad guys turned good? There are a few interesting setups on What If…?, some so much so that I prefer them to the canonical version. If only Hollywood was less sexist in general and more open to switching it up when the MCU began.

And that's also tied to why some of What If…? feels disingenuous and like checking a box. Evans spent a decade playing Steve Rogers/ Captain America in the MCU — that involved a standalone trilogy and four Avengers movies. What If…? gives Peggy (Hayley Atwell) half an hour to be Captain Carter. The new Marvel series' makers say there will be more adventures for Captain Carter in future seasons, but that's simply not enough. Watching the Peggy What If…? episode was like watching a condensed and chopped-off version of Captain America: The First Avenger — but now animated and with Atwell in the lead. Honestly, another season of Agent Carter would have been more fun, and that's why What If…? needed to spend more time with these alternate versions.

Maybe that's still on the cards. Critics have only seen three of What If…? season 1's nine episodes — it's why this should also be a considered a review of just those three episodes — and all three are disjointed and chronicle myriad tales. One of them features Boseman's T'Challa, who is said to be back in three more episodes, though it's unknown in what capacity. While reserving my judgment in that regard, I do believe What If…? would've been better off if it focused its energies on a couple of characters every year. That said, not every story needs that kind of expansive treatment, as the third tale shows. And for Disney+ and Marvel, the contained anthology approach means it can appeal to a much broader base of Marvel fans. Essentially, there's something for everyone.

The Empire, Cruella, What If…?, and More on Disney+ Hotstar in August

Benicio del Toro as The Collector, Chadwick Boseman as T'Challa/ Star-Lord in What If…?
Photo Credit: Disney/Marvel Studios

For now, the only element tying together these disparate What If…? tales is the Disney+ series' narrator The Watcher (voiced by Jeffrey Wright, from Westworld) who does just that: observe. As The Watcher says at the start of every What If…? episode, he does not, cannot and will not interfere. MCU fans have previously met a group of Watchers in one of the many post-credit scenes from Guardians of the Galaxy Vol. 2 that featured a Stan Lee cameo. Marvel's What If…? is also bound together by those behind the scenes. Emmy winner and Marvel's go-to storyboard artist Bryan Andrews (Samurai Jack) is the director on What If…? episodes, with A.C. Bradley (Trollhunters: Tales of Arcadia) as the creator and head writer — she's also a consulting producer on the upcoming Ms. Marvel series.

The MCU has always been like a giant TV show. For the first decade following its inception, we used to get 2-3 hour “episodes” on the big screen. And starting this year, we watched six-hour adventures broken into actual episodes. What If…? is neither. In what is a crude analogy, it's a TikTok video version of a Marvel movie. In other ways, it's Marvel Studios' first actual TV show in that its stories are contained to 30 minutes or so. It's also its first animated series — the studio did oversee Marvel's M.O.D.O.K. after Marvel Television was folded, for what it's worth — that allows it to operate on a different canvas than its standard live-action route. The first three episodes don't push the envelope though. As yet, What If…? feels like a footnote in the MCU encyclopaedia.

Marvel's What If…? begins Wednesday, August 11 on Disney+ and Disney+ Hotstar. New episodes will air every Wednesday until October 6. In India, What If…? is available only in English.