Guardians of the Galaxy Vol. 2 Review: Too Much of a Good Thing 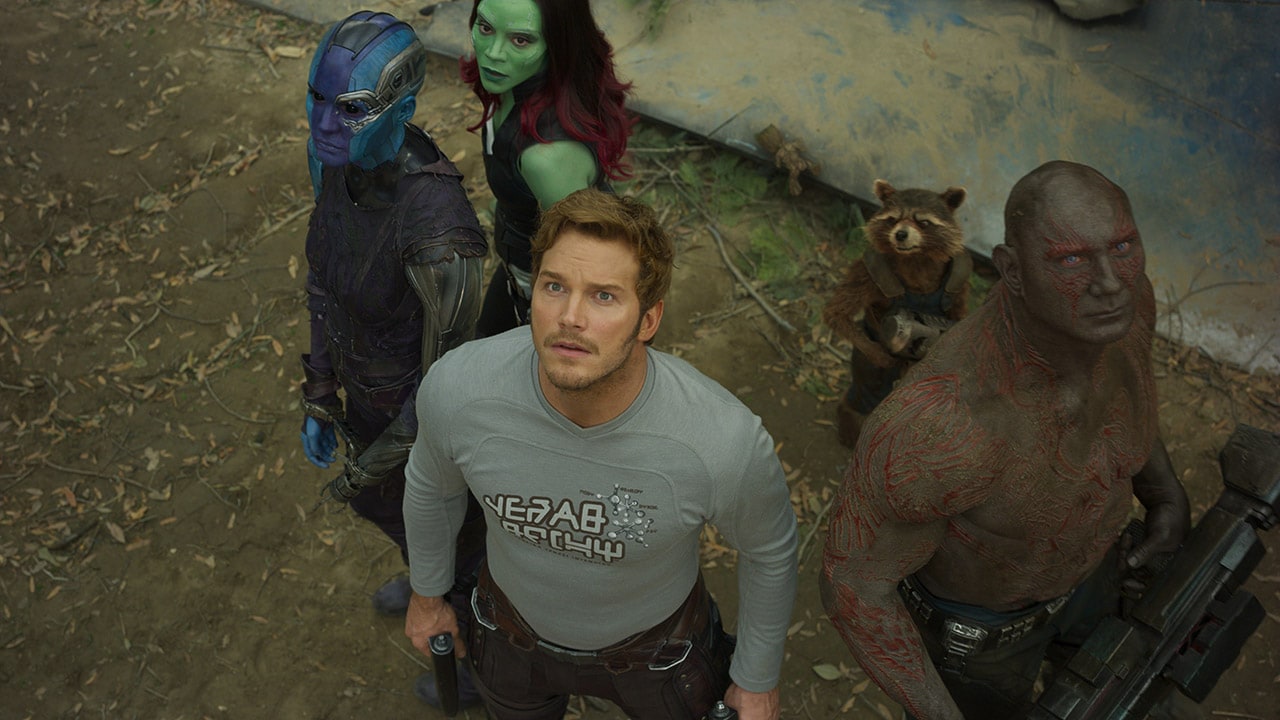 When director James Gunn gave us the irreverent and oddball Guardians of the Galaxy in 2014, the reasons it worked were three-fold: for one, it split away from the habit of fellow Marvel movies to drown themselves in self-seriousness; two, it contained a constant sprinkling of wise-cracks, even to the point of feeling forced; and three, it upended the visual and aural palette that superhero films had attached themselves to, post the success of Bryan Singer's X-Men, at the start of the century.

And it worked so well, in fact, that Disney felt confident to hand full creative control on the film's sequel – titled Guardians of the Galaxy Vol. 2, owing to the cassette-tape fancy of its makers – to Gunn, who assumed the dual role of writing and direction. On the first, Gunn contributed to the script alongside screenwriter Nicole Perlman, whose next Marvel adventure is Brie Larson-starrer Captain Marvel. Gunn has seen fit to double down on what endeared the original to its audience, in a bid to recapture that charm which raked in millions.

Unfortunately, Gunn doesn't seem to share the studio's confidence in him, and ends up over-stuffing the sequel with way too much. That's no easy feat, considering Guardians of the Galaxy Vol. 2 has a 15-minute longer runtime than its predecessor, and contains as many as five (yes, five) mid-credits sequences. Those are clear signs of an anxious and over-indulgent writer, one who's always on the lookout to cram another zinger, and continually distract you from the never-ending action fodder – paired with various 70s' classic rock hits – being played out over the galaxy. Once again, incidentally, the CBFC's moral opinions deprive us of a few laughs, be it characters discussing genitalia, or cursing their mouths off.

The core Guardians remain the same: there's Chris Pratt as half-human music-lover Peter Quill, or as he prefers, "Star-Lord", the unofficial team leader; Zoe Saldana plays green-faced alien assassin Gamora, who has an on-and-off “unspoken thing” with Quill; Dave Bautista as skilled warrior Drax, who leans into the character's innocence and disregard of social practices to make him funnier; Bradley Cooper completely losing himself in the gratingly-voiced, emotionally-unavailable, and sadistic raccoon Rocket; and Vin Diesel altering his voice to play Baby Groot, who's infinitely more naïve and goofy than his previous grown self.

Baby Groot, voiced by Vin Diesel, in a still from Guardians of the Galaxy Vol. 2

Like its 2014 original, Guardians of the Galaxy Vol. 2 opens on Earth in the 80s, with Kurt Russell – digitally-enhanced to appear much younger – wooing Quill's to-be mother, Meredith (Laura Haddock), while driving through the plains of Missouri to the tunes of Looking Glass' Brandy (You're a Fine Girl) on a tape titled ‘Awesome Mix Vol. 2'. The connection is implied – he's the father, and the man that was never there for his family, even at his wife's deathbed. A title-card later, we are in the present, but somewhere far away from the home we know.

Our unlikely crew – the self-proclaimed Guardians of the Galaxy, renowned for their heroics on the planet of Xandar – are dealing with a giant octopus-thingy, to get something they were promised by Ayesha (Elizabeth Debicki), leader of the genetically-engineered Sovereign race that presumably loves the colour of gold. The fight is as generic as they come, and so it rightly gets pushed into the background, sometimes out of focus and sometimes on the edges. The centre of attraction (and he really is, thanks to Gunn's judicious use) is Baby Groot, who grooves to Electric Light Orchestra's Mr. Blue Sky, shaking his foot-long figure and displaying a total ignorance of the dangers around him.

Gunn does bring a level of creativity to certain action sequences, using a few different techniques with the same core belief – a commitment to being enjoyable, and a refusal to take things seriously. Some of these revolve around Baby Groot; a famous scene glimpsed in a trailer revolves around his inability to comprehend simple instructions of setting off a powerful bomb. But as much as Guardians of the Galaxy Vol. 2 is satisfied to keep matters light-hearted, Gunn's yearning to establish a deeper emotional pathos are obvious from the start.

The biggest among those is Quill's origin story. Russell's character shows up as a gruff-looking old man after the Guardians take out that tentacled beast, introducing himself as Ego, and father to Star-Lord. Even without acknowledging that ominous name, Quill wonders as to the true nature of this powerful spaceman, but the quest for answers overcomes his doubts. Meanwhile, Gamora's severely-strained relationship with her sister, Nebula (Karen Gillan), gets explored in snippets scattered across the film, while her connection with Quill simmers on the same slow burner from the previous instalment.

Kurt Russell as Ego in a still from Guardians of the Galaxy Vol. 2

The other core members, though, don't receive as much attention. Rocket is continuing to be his abrasive self, and keeps pushing everyone away with a barrage of insults. Drax's deeper slide into a comic relief helps the film overall, but his character's personal journey hardly benefits in the process. To further highlight his goofball and upfront nature, Gunn's script pairs him with new entrant Mantis (Pom Klementieff) – an empath who can feel people's thoughts, and change their mind to an extent – a character that's inexperienced with social customs, and readily accepts observations at face value. In other words, an eight-year-old.

In fact, Guardians of the Galaxy Vol. 2 serves two returning cast members, in Yondu (Michael Rooker) and Nebula, much better. The latter's childhood issues with her "sister" - both were "adopted" (or rather, brutally kidnapped) by Thanos - drive her story arc once again, and help them reach an understanding. Yondu has a much larger presence - and corresponding narrative importance - that ultimately places him at the thick of things. Ego, by contrast, ends up looking like a cookie-cutter character whose grandiose plans and self-actualising beliefs drag the movie into the very stereotypes it loves to mock.

And then there's the familiar problem of most Marvel entries: the need to set up and advertise future instalments, in this case scheduled to arrive sometime after the next two Avengers films. Ayesha and the golden-coloured Sovereign race are a frequent part of the proceedings, despite having next to no impact, all because they are meant to play a bigger role come Vol. 3. You know who else does that? TV shows.

Owing to the Marvel Cinematic Universe's overly elaborate and elongated structure – Guardians of the Galaxy Vol. 2 is the fourteenth film since Iron Man, in 2008 – the relationships between characters usually remain in stasis (see Captain America: Civil War). When they do progress in any direction, the decisions are reversible (see Thor and Loki), and constitute of morsel-sized bites.

Rocket, voiced by Bradley Cooper, and Michael Rooker as Yondu in a still from Guardians of the Galaxy Vol. 2

And because Gunn tries to give every character more depth in Vol. 2 (a good thing), the film is unable to dwell on its emotional moments because it has too much to show, and too many sub-plots to follow to their logical end. That means it's always jumping to another scene when it could have done better to stay where it was. In its brave attempt to provide meaningful arcs to its entire cast, Guardians of the Galaxy Vol. 2 ends up with one too many scenes where a character narrates an important anecdote, while the camera slowly zooms into them.

Weirdly on top of all that, Star-Lord feels side-lined, despite the bigger arc assigned to his character, a movie that is essentially about him finding his true family. Wedged in between the standalone action set-pieces involving Rocket and the Ravagers, Yondu and his crew, and Gamora and Nebula, there are meant to be quiet moments with Quill that, on the surface, are meant to give us a peek into the dancing 70s-music-lover we met on a strange planet in the 2014 opening chapter. It's a shame then Gunn is unable to devise anything more than simple clichés, or stitch together three lines of dialogue without literally delving into meta-commentary drawn out on iconic pop culture, such as the 80s sitcom Cheers, or the aforementioned Looking Glass song.

Despite the film's bloated structure, and its tendency to sway and get distracted now and then, Gunn still manages to pack an emotional punch in the end, delivering a character send-off that's bound to bring most viewers to the verge of tears. But though the celestial action is grounded in relatable values, Guardians of the Galaxy Vol. 2's central message – that family comes in all shapes and sizes – struggles to shine through, amid the cacophony.

There's a better movie buried beneath that, and Gunn will hopefully be able to prize it out for the next chapter. Vol. 3 won't arrive at least until 2020, but fans of the Guardians won't have to wait that long to see their heroes, what with the entire cast expected to be a part of Avengers: Infinity War next year. As always, the Marvel train chugs along.

We discuss Guardians of the Galaxy Vol. 2 on this week's episode of Transition. you can subscribe to it via iTunes or RSS or just listen to this episode by hitting the play button below.

Guardians of the Galaxy Vol. 2