Original cloud saves, achievements, purchased games, and friend list will be carried over. 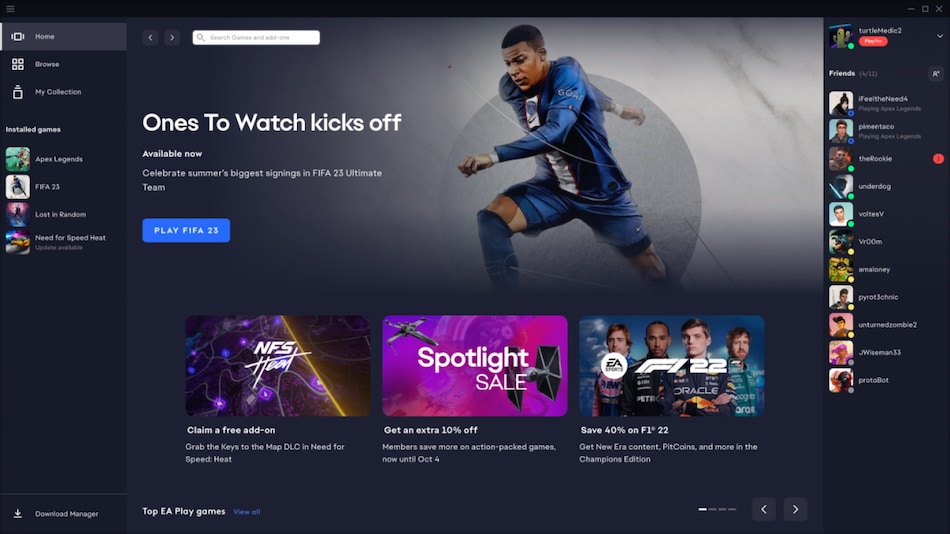 EA's desktop PC app is out of beta and is now available to download. The gaming client will fully replace Origin for PC, launched in 2011, and promises a “faster, more reliable, and more streamlined” Windows gaming experience. Mac users, however, won't be receiving this update and can continue using the Origin app. Shifting to the appropriately titled “EA app” carries over your save files, purchased games, and achievements seamlessly. The update will be available as an invite, or you can visit the official website. With this, the Origin name is gone for good — on PC anyway.

Installing the EA app will automatically delete Origin, thereby replacing it entirely. Once logged into the new client, which features a cleaner UI, players can directly start downloading games, background updates, or browse the store, which is now integrated with the EA Play subscription service. Speaking of which, your existing plans will carry over to the new software, be it EA Play or the premium EA Play Pro membership. If you were subscribed at one point, it will even prompt you, asking for renewal, before you navigate the actual application.

“For over 10 years, we've welcomed millions of players into our Origin platform, we've listened to your feedback and acknowledge the limitations of this platform in a quickly evolving entertainment landscape. So we set out to build EA's next-generation PC game platform,” reads the blog post.

Don't mind the ‘BETA' in the title bar, which should be removed with the upcoming update, which ensures all users on Origin have transitioned to the EA app. Players can easily import their friend list by connecting the account to other platforms like Steam, Xbox, and PlayStation — though, an initial login would be required. And while it does include a decent store page, featuring screenshots and description — like Epic Games Store — the trailer segment is simply a YouTube embed, which opens in a separate window.

Publisher clients such as Battle.net, Ubisoft Connect, and the aforementioned Origin have always sparked an online debate, owing to their inconvenience. Mainly due to an additional login process, regardless of where you purchased the game from. Thankfully, a PC Gamer report reveals that the upcoming Dead Space remake will be natively available on Steam, outside of the EA app. The company also reaffirmed that the transition to EA app will have no effect on this.

EA app is now available to download on Windows PC. Meanwhile, Mac users can continue using Origin with no interruptions.