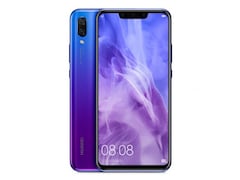 Huawei isn’t a very big name in the Indian smartphone space. So far, the Google Nexus 6P (Review) and the Huawei P9 (Review) have been the most recognisable products from this company, but we’ve seen little else over the years. Now, that might be about to change. The company appears to be instrumental in driving the growth of Android globally and for 2018, it is focusing on expanding its presence in India.

The Huawei Nova 3 features a curved glass back, slim borders for the display and a striking Iris Purple colour that gives it a striking look. The 6.3-inch display produces good colours and sharpness for images and text. It's powered by a Kirin 970 SoC, which handles multitasking well but also gets warm easily. The phone has something called a GPU Turbo feature, which boosts the performance in some games. The Nova 3 runs on EMUI 8.2, which is feature-rich. The quad-camera setup consists of a 16-megapixel sensor and 24-megapixel around the back and a 2-megapixel and 24-megapixel sensor on the front. The camera app also has AI functionality. The phone uses a 3750mAh battery, which delivers good battery backup for a day's worth of use.