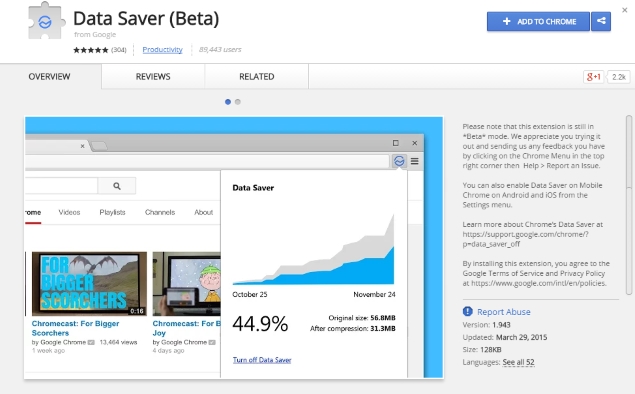 Google has launched a new Chrome browser extension called Data Saver, which can be used to save bandwidth and time when loading Web pages. The service has till now been primarily targeted at mobile users, since they suffer from limited connectivity and try to save expensive data. However, with the launch of this extension, Google has made the service available to PC users of the Chrome browser as well.

The extension will only work on Chrome 41 and above, and should turn on by default immediately after installation. It can be disabled and re-enabled through settings. It should also be pointed out that the extension does not function when used with secure (HTTPS) sites and during Incognito mode.

Google's Data Saver feature has been available for mobile devices through Chrome for Android and Chrome for iOS in release form since January 2014. Apart from saving bandwidth and loading Web pages faster, the extension also boosts security, since all sites are routed through Google's servers, where they are checked for malware and malicious pages.

The Data Saver feature is of course very useful for mobile devices, but will now also find some utility for PC users with slow Internet connections, limited Internet connectivity or low bandwidth plans. With this latest Chrome extension launch, Google appears to now be on track to launch the service in release form soon.