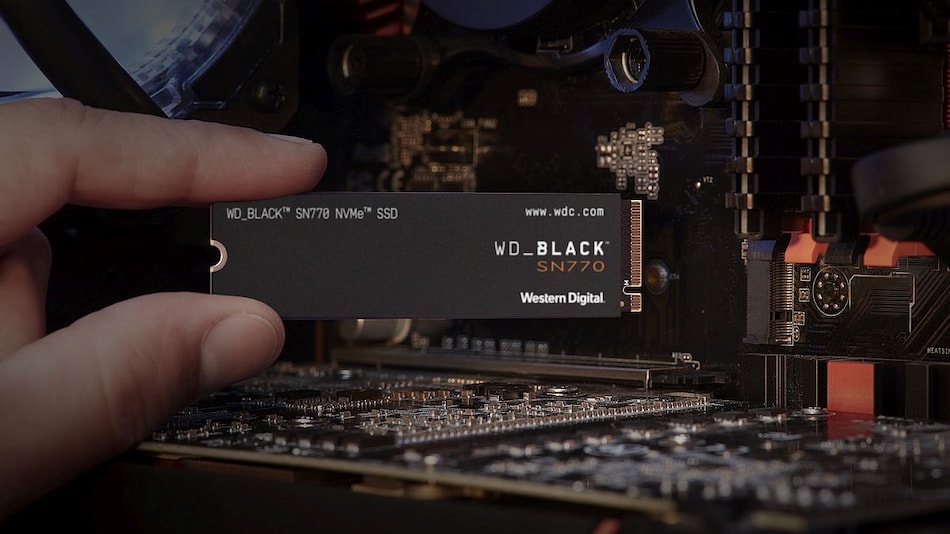 Western Digital launched the WD Black SN770 NVMe SSD (solid-state drive) in India on Tuesday. The company's latest SSD is aimed at gamers, and touted to provide quick load times, smoother streaming, and reduced in-game stutter in intensive games. WD Black SN770 offers read speeds up to 5.1GBps on the high-end storage models, along with thermal management and improved power efficiency, according to the company. The new WD Black SN770 SSD comes with support for PCIe Gen4 systems, along with backwards compatibility for PCIe Gen3 systems.

The new WD Black SN770 will also be available via select retailers, including Prime ABGB, themvp.in, PC Studio, Kryptonite Microsystems and M D Computers, according to the company.

The new WD Black SN770 NVMe SSD is built to succeed the previous generation - WD Black SN570 (Review) - that was launched in 2019. The new NVMe SSD launched by the company offers peak read speeds of up to 5150MBps and write speeds of up to 4900MBps via the PCIe Gen4 x4 interface, according to the company's website. Gamers who are using PCIe Gen3 systems will be able to use these drives, as they offer backwards compatibility, albeit at slower speeds.

According to the company, the WD Black SN770 NVMe SSD is aimed at gamers for smoother game streaming, and reduced in-game stutter, when users on modern motherboards with PCIe Gen4 compatibility. Western Digital also says that the drive offers 20 percent increased power efficiency over its previous generation of internal NVMe SSDs, the WD Black SN570, along with consistent performance due to improved thermal management.