A solid choice for value-conscious PC builders and upgraders 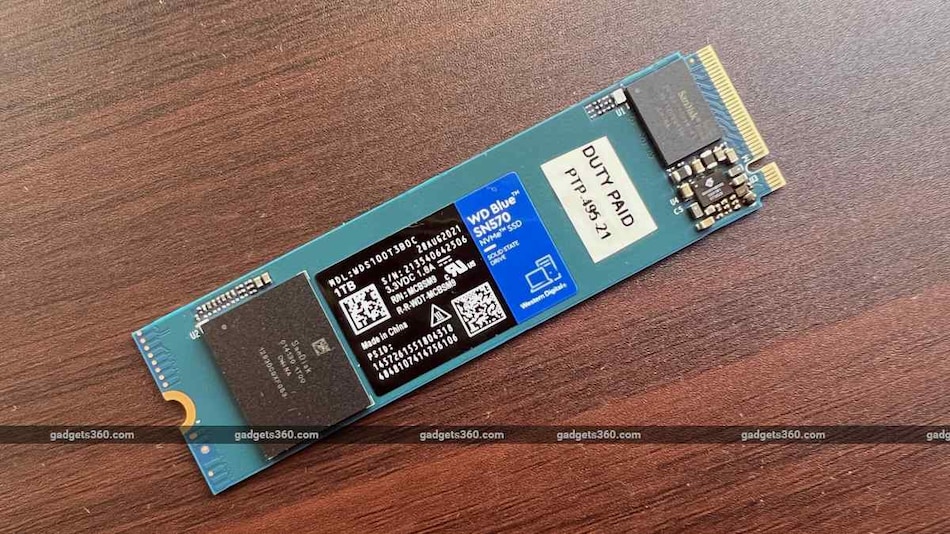 Western Digital has successfully pivoted from selling only mechanical hard drives to offering a range of storage solutions across media types and form factors. We're now well past the point where only enthusiasts would consider an SSD essential – it's hard to find a laptop without one these days, and even high-capacity models are not out of reach for everyday users. The WD Blue lineup targets those who don't want the absolute top-end specifications, or don't have the very latest hardware to take advantage of. With its latest model, the WD Blue SN570, the company has stuck with previous-gen standards in order to offer high capacities at reasonable prices.

The WD Blue SN570 succeeds the very popular WD Blue SN550, and slots in below the performance-oriented (and similarly named) WD Black SN750. However, WD isn't aiming for the very bottom of the M.2 SSD market, where options such as the Kingston NV1 exist (with non-guaranteed specifications). The Blue tier is meant to offer a balance of performance, reliability, and cost. The 1TB unit that we're reviewing today could potentially be the only storage device you need in your next PC. It could be a reasonably priced upgrade option too, if you only have a small SSD and are concerned about running out of space.

The WD Blue SN570 is available only in the M.2 form factor, and there are three capacity options: 250GB, 500GB, and 1TB. There's no mention of a 2TB option (yet) which is a surprise considering that the older SN550 is available in this capacity. In India, street prices start at Rs. 3,450 for the 250GB version, going up to Rs. 4,750 for 500GB. These figures are only slightly higher than what the older SN550 still sells for. The retail street price of the 1TB variant that we are reviewing today is around Rs. 8,350.

WD ships this SSD in a relatively oversized cardboard box with an inner plastic shell for protection in transit. All three versions have a five-year warranty. The company's website says buyers will get a free copy of Acronis True Image for Western Digital, which is a backup and cloning tool (for Windows or macOS), as well as a one-month Adobe Creative Cloud subscription. You also get WD's own Dashboard utility – more on this later. None of this software is mentioned on the product box, so you might miss out on it if you don't know it's available.

All of today's performance-focused NVMe SSDs have adopted the faster PCIe 4.0 specification, and PCIe 5.0 SSDs have been demonstrated running on the very latest motherboards. This might be overkill for average users and the benefits beyond a certain point are marginal in everyday use. WD has therefore stuck with PCIe 3.0 for the new WD Blue SN570. This will be widely compatible with most laptops and desktop PCs that have M.2 slots.

Speaking of compatible, the single-sided M.2 2280 module does not have any attached heatsink so it will also physically fit into tight spaces, such as thin-and-light notebooks. The module itself is surprisingly bare, with only a single flash chip and controller, and a small handful of surface-mount components for power conditioning. I would hope to see WD offer this drive in the more compact 2230 and 2242 sizes which are now being used even in tinier devices. Interestingly, WD's press shots show a slick-looking label covering the entire top surface of the module, but my review unit was largely bare with only a small sticker.

The rear of the WD Blue SN570 NVMe SSD is completely blank, which makes it thin enough for laptops

WD has used sister company Sandisk's 112-layer TLC flash, which is a bit denser than the SN550's 96-layer flash. This makes sense, as companies tend to phase out older SSD models when manufacturing volumes and prices shift to favour newer types of flash. The controller also has a SanDisk logo, but parent company Western Digital isn't saying much about its specifications. There is no discrete DRAM cache but part of the storage space can be allocated in SLC mode which speeds up writes.

Peak sequential read and write speeds are up, compared to the older WD Blue SN550. The company now promises up to 3500MBps reads and 3000MBps writes for the 1TB version, though that drps all the way to 3300MBps reads and 1200MBps writes for the 250GB version). The rated endurance scales proportionately: 150TBW for the 250GB model, 300TBW for the 500GB one, and 600TBW for 1TB. These figures refer to the minimum number of terabytes that can be written to each drive in total, which works out to about 328GB per day over the five-year warranty period – far more than most consumers are ever likely to need.

There's no mention of encryption on the spec sheet. Power consumption is rated at a maximum of 3.5W under load and as little as 5mW in sleep mode.

While it might be a mainstream SSD, the new WD Blue SN570 matches some high-end models from a few years ago in terms of rated maximum speed. To see how it fares in the real world, I put it through a few benchmarks. The test rig consisted of an AMD Ryzen 7 2700X CPU, a Gigabyte Aorus X470 Gaming 7 Wifi motherboard, 2x8GB of G.skill DDR4 RAM, a 1TB Samsung SSD 860 Evo boot drive, a Sapphire Nitro+ Radeon RX 590 graphics card, and a Corsair RM650 power supply. I used Windows 10 20H2 with all the latest drivers and patches installed.

These scores are about as good as they can get for PCIe 3.0 NVMe SSDs. This is several times better than even today's best SATA SSDs could ever manage, and of course the difference between this performance and that of a mechanical hard drive would be like comparing night and day. WD has managed to undercut older premium PCIe 3.0 options such as the Kingston KC2500 and Adata SX8200 Pro in terms of pricing.

Of course, do keep in mind that these scores apply only to the 1TB version of the WD Blue SN570. The lower-capacity options are more likely to be popular, but buyers should adjust their expectations in line with the maximum speeds published on WD's website.

As its name suggests, the WD Dashboard app shows detailed statistics about free space on the drive, operating temperature over time, and “life remaining” which is a somewhat reassuring representation of diagnostic data. Unfortunately, the app also shows a large ad for other WD offerings. On other tabs you'll find a real-time performance graph, SMART diagnostics, a Windows write caching override, and tools such as a secure eraser and firmware updater. Other than the ads, this is a well-designed and feature-rich SSD management app.

The WD Blue SN570 NVMe SSD (1TB) could be an excellent choice for your desktop or laptop, if you want a lot of space without spending too much. This is especially true of older PCIe 3.0 platforms that are in line for an upgrade, since anything faster would be a waste. Surprisingly, lower-tier options such as the Kingston NV1, which doesn't perform quite as well, are selling at around the same price. Even the older WD Blue SN550 isn't significantly less expensive.

Of course many people today might prefer a PCIe 4.0 NVMe SSD such as one of WD's Black models, and this would make more sense if you're building a high-performance PC with current-day specifications. You might notice some difference when loading game levels with high-res textures, or when importing huge video files to work on in an editor. For ordinary everyday use, or even as a secondary SSD, the WD Blue SN570 (1TB) is one of the best options you'll find right now in terms of the balance of cost and performance.