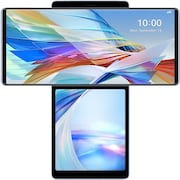 LG has been an innovative smartphone manufacturer, and we've seen some out-of-the-ordinary smartphones from it recently. The LG G5 was a notable attempt at a modular smartphone, while the more recent LG G8X ThinQ and LG Velvet were foldable dual-screen models. The LG Wing is yet another one that breaks conventions with a futuristic and completely different form factor. The primary display rotates to a horizontal position, revealing a smaller secondary display below it. The LG Wing forms a “T” shape when opened, and that raises a few questions – will this form factor be useful for multitasking, or is this just a cool party trick? Here is my review of the LG Wing.

The LG Wing runs Q OS is based on Android 10 and packs 128GB of inbuilt storage that can be expanded via microSD card (up to 2000GB). The LG Wing is a dual-SIM (GSM and GSM) mobile that accepts Nano-SIM and Nano-SIM cards. The LG Wing measures 169.50 x 74.50 x 10.90mm (height x width x thickness) and weighs 260.00 grams. It was launched in Aurora Gray and Illusion Sky colours. It features an IP54 rating for dust and water protection.