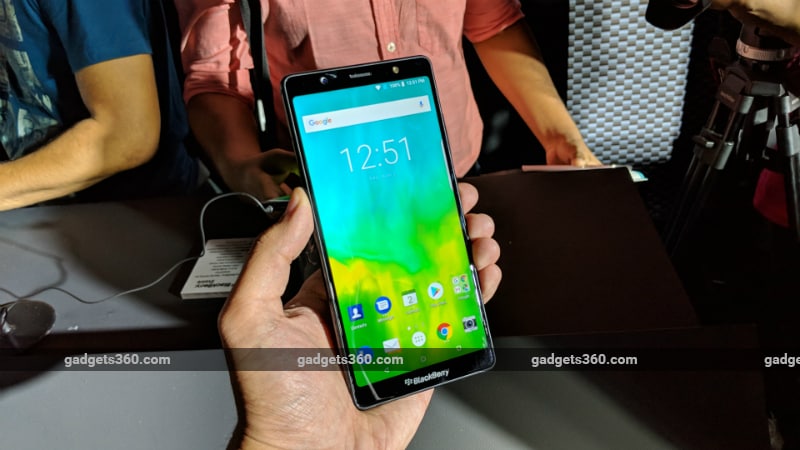 BlackBerry Evolve price in India has been set at Rs. 24,990

The BlackBerry Evolve X and Evolve have been launched in India at an event held in the capital on Thursday. Both smartphones will be sold in the country by brand licensee Optiemus Infracom. The company announced that the two handsets have been conceptualised, designed, and manufactured in India. The Evolve and Evolve X feature Corning's Gorilla Glass 5, Series 7000 aluminium frame, and a BlackBerry textured and rubberised back panel. BlackBerry Evolve X and Evolve price in India, availability, specifications, and features have been revealed at the event. Let's have a look.

The BlackBerry Evolve X price in India has been set at Rs. 34,990 for the lone 6GB RAM/ 64GB storage variant. On the other hand, the BlackBerry Evolve has been priced at Rs. 24,990 in India. The Evolve X will go on sale starting mid-September and the Evolve by end August. Both will be made available in India initially via Amazon.in, and subsequently via offline retailers.

Launch offers include a 5 percent cashback with ICICI Bank credit cards (only on no cost EMI plans). Other than that, no cost EMI options are available from all leading banks. Benefits worth Rs. 3,950 are available for Jio SIM card users.

On the front, both of them bear a 16-megapixel fixed focus sensor with f/2.0 aperture, 78-degree FoV, Tetra Pixel technology, real-time bokeh mode, and LED flash. There is a 4,000mAh battery under the hood, once again, for both. There is support for wireless charging only on the Evolve X, and a wireless charger will be sold separately for it.

The two new BlackBerry smartphones come with the BlackBerry Power Centre app that uses deep learning to analyse your usage and optimise battery settings. It also lets you modify RAM allocation for each app, and create custom battery profiles. Both handsets feature built-in Dolby audio, however the Evolve X supports an evolved Dolby Atmos technology. The new BlackBerry Hub brings together all communication apps such as Facebook and Twitter into a single app to help you navigate through your social media accounts.

Security features include the BlackBerry Password Keeper app that helps secure your passwords in a vault and also helps in creating new secure passwords. The BlackBerry Privacy Shade feature helps reduce visible screen size to the area which you are accessing. Root protection is also available with OS hardening.

Can BlackBerry Evolve X and BlackBerry Evolve rejuvenate the brand in India? We discussed this on Orbital, our weekly technology podcast, which you can subscribe to via Apple Podcasts or RSS, download the episode, or just hit the play button below.