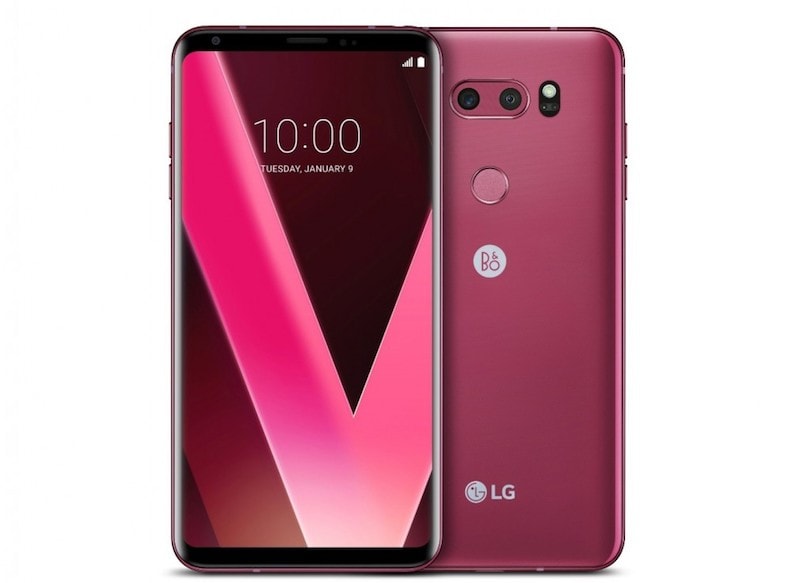 LG V30 has been introduced in a brand new 'Raspberry Rose' colour option ahead of the Consumer Electronics Show (CES) 2018. The annual CES event, to be held in Las Vegas, is scheduled to kick off on January 9 and big announcements have already started to pour in. LG has said that the new colour option for the V30 smartphone will initially be available in Korea and later in the European and Asian markets. The 'Raspberry Rose' colour of the smartphone has been described by LG as an 'intense saturated version of red'. The South Korean giant is targeting the 'fashion-conscious' smartphone users and plans to make the most of the upcoming Valentine's Day.

The LG V30 Raspberry Rose model sports the same features and specifications as that of the original V30 smartphone which was announced in August 2017. The other colour variants of the LG V30 smartphone are: Aurora Black, Cloud Silver, Moroccan Blue and Lavender Violet.

When it comes to India, the original version of the LG V30 was not launched. Instead, LG had brought the V30+ in the country and the major difference between the phones is in terms of storage capacity. The LG V30+ comes with 128GB internal storage and the V30 has 64GB of native storage. The price of the LG V30+ in India is Rs. 44,990.

The LG V30 is a single-SIM smartphone and runs on Android 7.1 Nougat out of the box. It comes with a 6-inch P-OLED 18:9 display with 1440x2880 resolution and is powered by the Qualcomm Snapdragon 835 SoC. The smartphone with 4GB of RAM has a dual-camera setup. At the back, the LG V30 has a 16-megapixel standard angle lens with f/1.6 aperture and a 13-megapixel wide-angle lens with f/1.9 aperture. Meanwhile, there is a 5-megapixel camera at the front.

In terms of storage, the handset has 64GB of internal storage which can be expanded up to 200GB via a microSD card. Connectivity options include Wi-Fi, GPS, Bluetooth, NFC, and 3.5mm headphone jack. Sensors on the phone include the Proximity sensor, Accelerometer, and Ambient light sensor. The LG V30 is powered by a 3300mAh non-removable battery. It measures 151.70x75.40x7.30mm and weighs 158 grams.