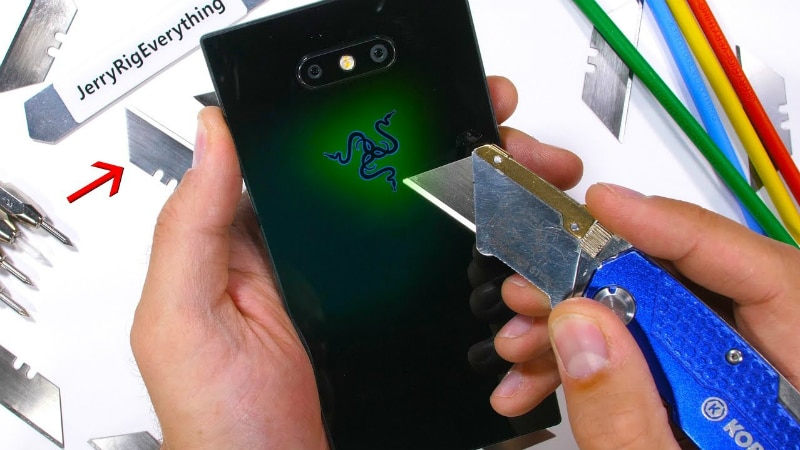 Razer Phone 2, successor to last year's Razer Phone, was launched by the gaming brand earlier this month. With premium internals and a classic design, the Razer Phone 2 is targeted at high-end mobile gamers. As for upgrades over its predecessor, the Razer Phone 2 comes with a Qualcomm Snapdragon 845 SoC, wireless charging support, and more. Zack from YouTube channel JerryRigEverything put the phone to his famed durability test to find out whether this new gaming flagship fares against the best in the game (no pun intended). The phone performed well in all of his tests, and was on par, if not better, with competing flagship models in the market.

The 5.7-inch LCD panel of the Razer Phone 2 comes with Corning Gorilla Glass 5 protection. Starting off with the scratch test, the smartphone gets scratched starting at level 6 of JerryRigEverything's test and gets deeper grooves at number 7. This is standard for the kind of display protection on this handset. He also goes on to scratch the plastic casing of the front-facing speakers as well as the anodised aluminium casing all around the Razer Phone 2. A notable takeaway from this test was how the fingerprint sensor on the lock/ power button still worked after the button was substantially scratched.

Moving on to his burn test, the LCD panel on the Razer Phone 2 lasted a good 19 seconds before pixels started burning, However, unlike AMOLED panels, the display on the smartphone started gaining back the lost pixels as temperature dropped. “Once the heat was removed, the pixels recovered, respawning back to full health,” noted Zack in his durability test.

Lastly, the Razer Phone 2 passed the bend test with flying colours. “It's surprisingly even more rigid than last year's first Razer Phone.” The Razer Phone 2 refused to bend even slightly with utmost pressure, owing to its high quality metal chassis.

Summing up the entire durability test, Zack reiterated that “it's [Razer Phone 2] probably one of the most well-built, structurally solid phones I have tested so far this year. I am a fan.” The combination of metal and glass seems to be enough to guarantee a strong and rigid build on the Razer Phone 2. To recall, the Razer Phone has been launched in the US at a price of $799.99 (roughly Rs. 58,700) for the 64GB storage model. A 128GB storage variant was also announced but will be released at a later date.