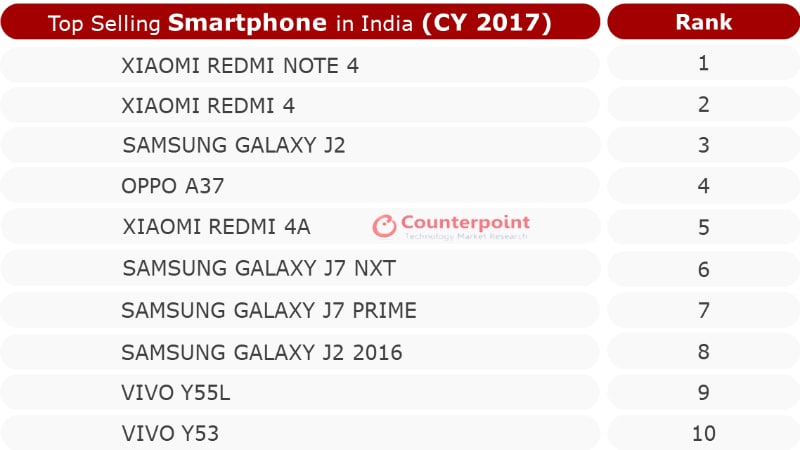 Xiaomi Redmi Note 4 was found to be the top selling smartphone in India for CY (Calendar Year) 2017. A Counterpoint Research report suggests that Xiaomi's budget smartphone sold the highest number of units in the smartphone segment in 2017. Xiaomi took three spots on the list, Samsung took four spots, Vivo took two spots, and Oppo got one position. A recent report also ranked the Jio Phone as the top selling feature phone of Q4 2017.

As we mentioned, the Xiaomi Redmi Note 4 became the top selling smartphone in CY 2017 in India - according to the latest report by Counterpoint Research. We have reached out to Counterpoint for a comment on the total shipment volumes of the smartphone.

The report also reveals other revelations in the Indian mobile phone industry. Counterpoint, along with Canalys, claims that Xiaomi has beaten Samsung to become the top smartphone seller in India in terms of percentage of total shipments in Q4 2017. Xiaomi, with 25 percent of the shipment market share, beat Samsung that stood at 23 percent for the same quarter. Notably, Samsung was still top ranked for CY 2017 with a 24 percent share compared to Xiaomi's 19 percent market share.

Reliance Jio made a striking entry into the feature phone segment with a 26 percent market share; Samsung ranked second with just 15 percent of the total market. Despite the success of Jio Phone, Samsung did manage to claim the top spot for feature phone shipments in CY 2017 with a 21 percent market share. Itel ranked second with 12 percent and Jio came in at third with 11 percent.