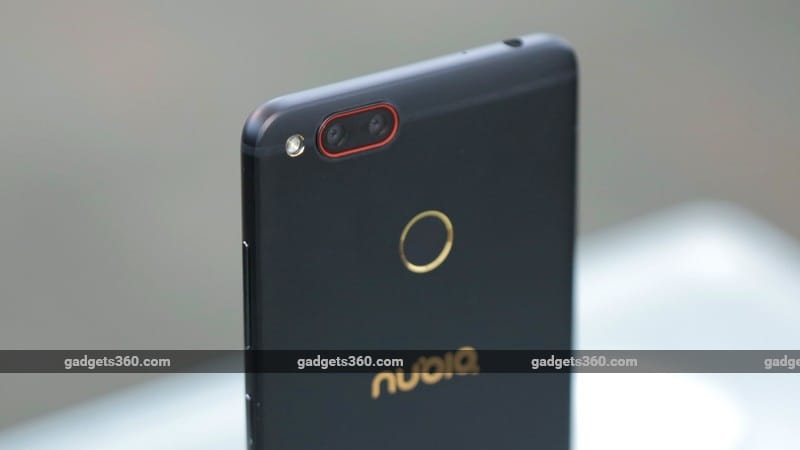 Nubia has been busy filling up the budget and mid-range smartphone markets this past couple of months. The last offering that we reviewed was the Z11 mini S (Review), which featured an excellent set of cameras and very good all-round performance.

The Z17 mini aims to tick some of the boxes left unchecked by the Z11 mini S. This model is also available exclusively via e-commerce channels, but at a slightly higher price of Rs. 19,999. Let’s see what’s changed, and if the new launch is worth a premium.

Nubia has once again done a very good job with the design of this phone. The Z17 mini feels compact and comfortable, thanks to the rounded edges all around the body. The 2.5D curved Gorilla Glass blends seamlessly with the sides. The satin finish on the back is a bit slippery when used one-handed, but the texture holds up well against the bumps and scuffs of everyday use. We also didn’t mind the gold accents running along the bevelled edges and around the fingerprint sensor, which add a bit of style to an otherwise understated design.

The 5.2-inch display has a satisfying full-HD resolution which results in dense pixel coverage for smooth text and crisp pictures. Colours are vivid and punchy, and you can set the saturation level to any of three presets. Colour temperature can also be adjusted. There's no notification LED on the top but the ‘breathe’ light on the home button glows when you have a message or a missed call notification. However, this doesn’t work for alerts from other apps like WhatsApp.

Button placement is good and so is their tactile feedback. There’s a dual Nano-SIM tray on the left for two SIM cards, but you could opt for a microSD card in the second slot instead (up to 200GB). The finish of the tray feels a bit crude and it's a bit of struggle to pull it out. The headphones socket is on the top, and the USB Type-C connector is at the bottom, along with a mono speaker grille.

The dual camera module at the back is slightly raised, but you shouldn’t worry too much about scratches as there’s sapphire glass protecting the lenses. The fingerprint sensor aligns well with your index finger when you hold the phone, and is quick at authentication. Like most phones these days, it serves other purposes too like letting you lock down apps and files, and performing a gesture to take screenshots, besides unlocking the phone.

The Nubia Z17 mini is only available in this black-gold finish in India. In the box, you get a 7.5W power adapter, a data cable, a SIM ejector tool, and some manuals. A headset isn’t bundled with it. We quite liked the shape and size of the Z17 mini, as it is slim at just 7.45mm and not heavy either at around 155 grams.

The Nubia Z17 mini is slightly better equipped than the Z11 mini S in the processor department. The company has gone with the more powerful Qualcomm Snapdragon 652 octa-core SoC, which might not be as power efficient as the Snapdragon 625 due to its older 28nm fabrication process, but has four Coretex A72 cores and integrated Adreno 510 graphics for an edge in processing power. This is reflected in benchmarks, where we saw 83,850 points in AnTuTu and 36fps in GFXbench’s T-Rex test.

Aiding this good performance is 4GB of RAM. The Nubia Z17 mini also comes with 64GB of internal storage, Bluetooth 4.2, dual-band Wi-Fi 802.11ac, NFC, GPS, FM radio and USB-OTG. Sensors include an accelerometer, gyroscope, compass and light sensor. The phone supports 4G on both SIMs with VoLTE too.

Software is disappointing, as this phone is still stuck with the Nubia 4.0 UI based on Android 6.0.1 Marshmallow. Security isn't up to date either, and our review unit was last patched on February 1. We reached out to Nubia regarding this but didn’t get any concrete reply about whether or not a Nougat update will ever come to the Z17 mini.

Having said that, the company has already incorporated some Android 7 features into its interface, such as split-screen multitasking. There are edge gestures to play around with too, and you can have two instances of certain apps. The Super Screenshot tool also lets you perform screen recording. We’ve covered these features already in our Z11 mini S review.

Pre-installed apps include News Republic, Kika keyboard, and some non-removable apps including a user manual and screen projection utility.

The interface is single-layered and runs pretty smoothly for the most part. We didn’t face any overheating issues iwith regular usage. The back of the phone gets a bit warm with extensive use of the camera and while gaming, but even this is not too drastic. The Nubia Z17 mini works well on 4G networks with good call quality. The speaker sounds quite tinny for media but does an okay job with voice calls.

You need to long-press the ‘Back’ button to bring up the app switcher because the second capacitive button is bound to the old Android menu function, which most apps don't even use anymore. We would have liked to at least have the option to customise this behaviour, but the only thing that can be done is to swap the functions of the two capacitive keys on either side of the Home button.

The Snapdragon 652 handles 4K video playback very well and needless to say, it does well with other high-bitrate videos too. The custom music player has a nice design and offers good functionality for sorting your music, plus effects like DTS Sound for the speaker.

The camera is one of the big highlights of the Z17 mini and in order to give it an edge over the competition, Nubia has fitted it with two 13-megapixel sensors (one RGB and one monochrome). This combination is meant to improve detail in photos, but unfortunately, the results aren’t very impressive when photos are seen on a larger display.

Landscapes taken in daylight have fairly good detail and colours look natural, but zooming in reveals some artifacting around the edges of objects due to oversharpening, and a ‘water-colour’ effect to distant objects. Macros look good on the display of the phone but the sensor isn’t able to capture complex details, like small fibres and pollen on a flower for instance. Photos appear a bit soft, although colours are good.

Tap for to see-sized image of Nubia Z17 mini samples

The Z17 mini does a decent job in low light, despite the not-so-great f/2.2 aperture. There’s an ‘Intelligent noise reduction’ option in the settings which makes a big impact. It essentially gets rid of most of the chroma noise in an image and the difference is instantly noticeable in both daylight and night shots. The camera app has a Portrait mode too, which blurs the background behind a subject. However, the result is pretty poor and is nowhere close to what the OnePlus 5 (Review) and iPhone 7 Plus (Review) can achieve. You can play around with the aperture and focus after taking shots, but it’s just too much effort, and even after all that, there's little chance of ending up with a usable shot.

The Nubia Z17 mini camera app gives you a number of modes to choose from, some of which are useful while others are just plain gimmicky. Some features need more refinement, like DNG (Digital Negative) mode which has a duplicate slider for shutter speed. Video recording tops out at 4K resolution and the quality is good but there’s no stabilisation, and the sensor hunts for focus often if you move about even slightly. At 1080p, the app tries to do electronic stabilisation but the frame rate is quite choppy and the end result isn’t very good.

In the front, we have a 16-megapixel sensor with a wider f/2.0 aperture. Selfies look good in daylight and they’re not so bad in low light, with the screen flash. However, details just aren’t as good as the ones we were able to take with the Z11 mini S, which also boasted of PDAF.

The 2950mAh battery on the Nubia Z17 mini lasted for 10 hours and 42 minutes in our HD video loop test, which is about average. With actual usage, we found that the battery level warning popped up well before the day was up. With careful usage, you should be able to go up to a full day, but gaming and battery intensive activities will drain it faster. There’s no fast charging either, so it will take you close to two hours to fully charge this phone.

The Nubia Z17 mini is a bit of an expensive proposition at its current price of Rs. 19,999. Nubia has an exchange offer on Amazon that promises up to Rs. 13,000 off, but a discount that steep would require you to trade in an iPhone 7 or similar phone, so realistically you'd get a far more modest benefit.

The Z11 mini S seems more balanced and less expensive, and we would have liked to recommend it instead. Sadly, Nubia has confirmed to Gadgets 360 that there won't be any fresh stock in the market. There's also no official confirmation of when new software updates will arrive, which makes us wonder whether the Z17 mini is also destined to meet the same fate. If Nubia can pull the plug on a phone that's only a few of months old (and a good one at that), one has to be concerned about every new launch.

To avoid being left high and dry, we recommend going with the tried-and-tested Moto G5 Plus (Review), Samsung J7 Prime (32GB) (Review), or even the Honor 8 (Review) instead.