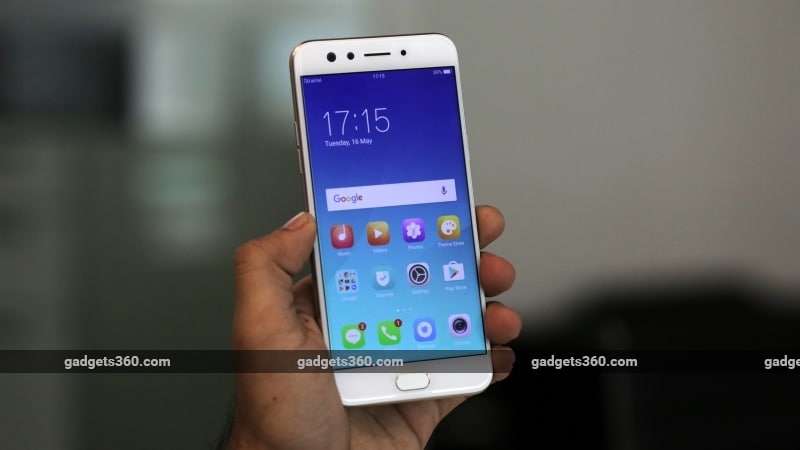 Oppo’s dual selfie camera feature now comes to the sub-Rs. 20,000 price segment with the Oppo F3. We reviewed the F3 Plus (Review) back in March, which apart from being a good smartphone, had a practical use case for the secondary front camera, a feature we really appreciated.

The company has now brought that same camera setup to a more affordable price segment, and in essence, this model replaces the ageing Oppo F1s (Review). In order to achieve price point, Oppo has made a few compromises in the materials used for the chassis, the rear camera, and the processor under the hood. Let’s see if the new Oppo F3 can still deliver good value despite these reductions.

Oppo F3 design and build quality
If you’ve use the Oppo F3 Plus or at least held it, then you’ll instantly appreciate the smaller size of the Oppo F3. The phone is fairly slim at 7.3mm and light at 153 grams. It's a lot more pocketable compared to its more expensive 6-inch sibling. The 5.5-inch display with slim borders on either side makes it easy to use this phone one-handed, however the notification shade is still a bit of reach even for those with large hands. The sides of the display don’t blend with the body very smoothly, and the pre-applied screen protector gets in the way every time you swipe left or right.

The layout of the buttons and ports has't really changed compared to our last few experiences with Oppo smartphones. There’s a large capacitive Home button below the screen that’s flanked by two capacitive navigation keys, which are backlit. The power button is on the right, while the volume buttons are on the left. The SIM tray can accommodate two Nano SIMs and there’s a dedicated slot for a microSD card (up to 128GB). The chassis is built using plastic except for the back plate, which is metal. This surface is prone to scuffs so it’s advisable to use the bundled silicone case with the F3.

We found the brightness of the display on the Oppo F3 to be sufficient for outdoor use, and colours don’t get jarring like they did on the F3 Plus. The display is fairly sharp thanks to the full-HD resolution, and can resist damage thanks to the use of Corning Gorilla Glass 5. We didn’t have any issues with touch response either. The audio socket, Micro-USB port, and speaker grille are all on the bottom.

Overall, the Oppo F3 doesn’t disappoint in terms of build quality and aesthetics. It looks and feels very much like the Oppo F1s, which can be a good thing if you liked that design. In the box, you get a 10W power adapter, a data cable, a headset, a silicone case, a SIM ejector tool, and the instruction manuals.

Oppo F3 specifications and features
We understand that Oppo had to cut corners in order to bring down the price of this phone, but the choice of SoC is slightly disappointing. The F3 is stuck with an octa-core MediaTek MT6750T SoC, which is a mild refresh of the MT6750 seen on the Oppo F1s. From what we can tell, it only has a higher GPU clock speed. In benchmarks, the F3 produces decent numbers. We got 53,023 points in AnTutu but GFXbench resulted in just 17fps during a run of the T-Rex test.

The phone also has 4GB of RAM and 64GB of storage, which is plenty for today's apps and games. Other specifications include Bluetooth 4.0, dual-band Wi-Fi 802.11a/b/g/n, USB-OTG, GPS, a proximity sensor, a compass, and a gyroscope.  There’s also support for 4G with VoLTE, but this phone lacks FM radio.

The Oppo F3 still uses ColorOS 3.0, based on Android 6 Marshmallow. The interface has a strong likeness to iOS, which is noticeable in some of the icons for system apps. Pulling down the notification shade only shows you quick settings toggle switches, and you have to swipe right to get to your notifications, which can be annoying. The fingerprint sensor works well and you can lock apps and files with it. Certain apps like WhatsApp can be cloned so you can have a second instance running for your second SIM card.

There are some on-screen and screen-off gestures to aid in single-handed use and let you open apps when the phone is in standby. Oppo also has its lockscreen magazine, which when enabled, cycles through different wallpapers. O-Cloud is for backing up your contacts and messages, and there's a custom app store for curated apps. Other preloaded apps include Google’s suite, Facebook, Instagram, Amazon, and WPS Office.

Oppo F3 performance, camera, and battery life
Despite the slightly dated SoC, there isn’t any noticeable lag in the interface. The Oppo F3 handles multitasking pretty well too. The phones gets a bit warm while gaming or watching videos for an extended period of time, but not to the extent that usage is hampered. Button feedback and placement is good and we didn’t have any issues with call quality either. There is a notification LED, placed next to the front cameras, but it’s only triggered for missed calls and messages, not WhatsApp or other apps. The volume level for alerts is good but the placement of the speaker isn’t ideal, and your palms tend to block it when gaming or watching videos in landscape mode.

Full-HD videos play just fine and we didn’t have any trouble with our high-bitrate files. There is a sound enhancement feature built into the OS called Real Sound Technology, which is jointly developed by Oppo and Dirac Research. The effect isn’t very significant when using the bundled headset, but can be felt better with more capable headphones.

Around the back, we have a 13-megapixel sensor with Dual PDAF and an f/2.2 aperture. Focusing is quick in good lighting although we noticed that the speed dips a bit in low light. Landscapes taken in daylight have good detail although the colours could have been a little more vivid. Auto HDR mode works well too. Macros look good on the phone’s display but aren’t very sharp once you actually zoom in. Low-light shots are acceptable but details are a bit lacking in landscapes and macros. The single LED flash isn’t too powerful either. 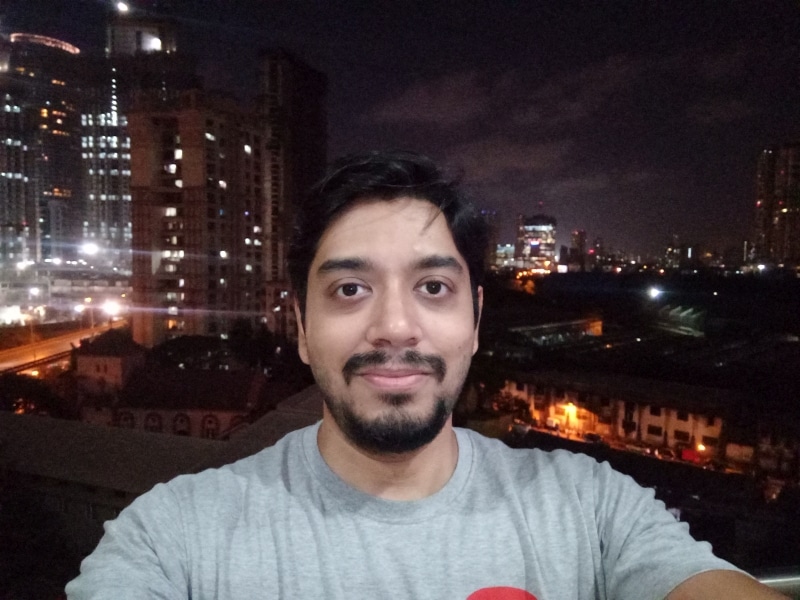 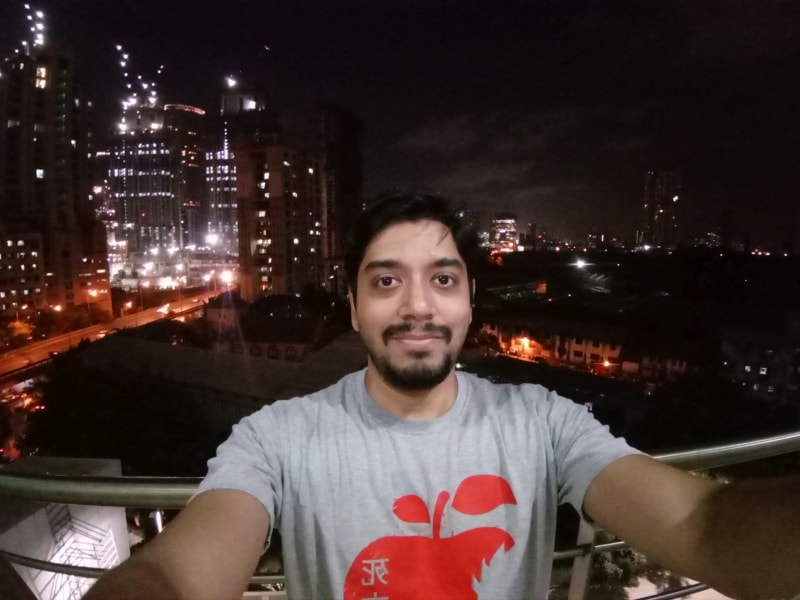 However, it's the front cameras that are the main stars here, and just like on the F3 Plus, they do a good job with selfies. The primary 16-megapixel shooter captures detailed shots but doesn’t always get light metering right, especially if you’re shooting against a bright background. The secondary 8-megapixel sensor captures a wider field of view thereby allowing more people to fit in a frame, but keep in mind that this also introduces some barrel distortion.

The quality of images is not as good with the secondary front camera as it is with the primary one, especially in low light, but it’s acceptable. The screen flash really helps in reducing noise from faces but there's no escaping noise in the background of a shot. There’s a blur mode which only works for the main front camera and creates a pseudo-bokeh effect. Beauty mode lets you enhance the look of your skin. They're fun features and work relatively well.

You get the usual variety of shooting modes that we’ve seen before, including Expert Mode, which lets you set shutter speed and focus and also lets you save RAW files. The camera app is designed well and is easy to navigate. Video recording tops out at 1080p for the front and rear cameras, and quality is pretty good.

The 3200mAh battery easily manged to power this phone through a full day’s worth of regular usage. We got about 10 hours and 33 minutes of continuous video playback, but we expected better. The 10W power adapter helps charge the phone relatively quickly, but we still wish real fast charging was supported.

Verdict
The Oppo F3 is priced at Rs. 19,990, which we feel is a bit on the higher side considering the processor it's packing. However, there isn’t much competition right now as it's the only smartphone in this segment with this sort of dual camera feature. If that doesn't matter and you’re looking for a bit more power under the hood, then you always have the Moto G5 Plus.

The Oppo F3 is a good upgrade over the Oppo F1s, but there are areas that could have used some improvement. FM radio is still absent, and many people in India use this form of entertainment even today. ColorOS 3.0 is beginning to feel a little dated now and there’s still no clarity on whether any of the new F3 series will get an update to even Nougat, considering that Google is gearing up for its Android O launch. Last but not least, the performance of both the front and rear cameras is not as good as with the F3 Plus.

At the end of the day, the Oppo F3 is meant for those who can't (or don't want to) spend a premium on the F3 Plus. It definitely is more affordable, but that's because of the compromises you have to make.