Apart from good looks, are there other qualities that work in the C35's favour? 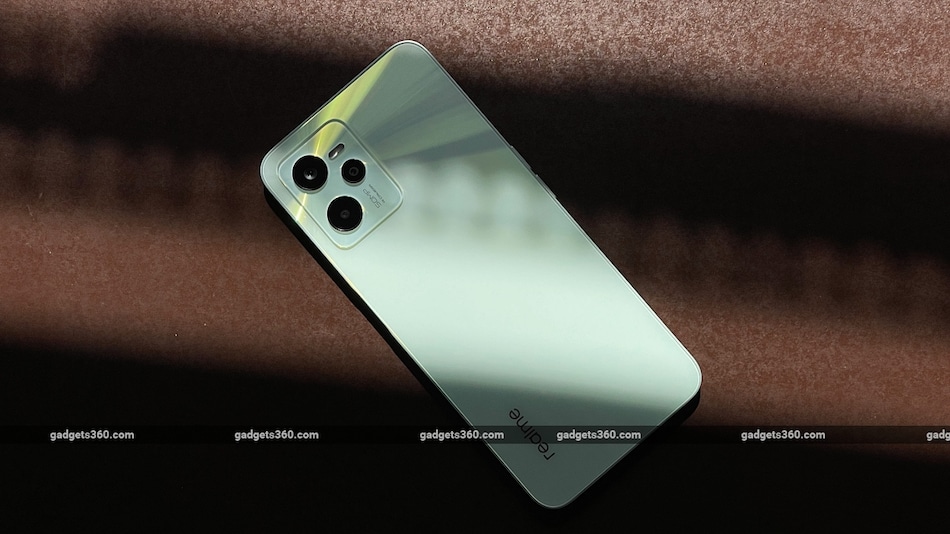 Budget smartphones, especially those priced below Rs. 10,000, usually offer decent value for money in terms of hardware, in simple, practical packages. Flashy, premium designs are rare, as the focus for such devices is generally to deliver a good enough user experience and very good battery life. However, Realme seems to have come up with something different in its C series. The new Realme C35 boasts of a premium look and finish, which sets it apart. The company has also managed to pack a 5,000mAh battery into the C35's slim body. It looks good, but does it perform well too? Let's find out.

Compared to past C-series smartphones, the Realme C35 feels like a breath of fresh air. It's still made of polycarbonate but feels a bit more premium than older models from the same series. Keeping in line with current design trends, the C35 has a matte frame with flat sides and edges. The rear panel is also flat but has a glossy finish.

The Realme C35's back panel and frame are made of polycarbonate

The camera module on the back of the phone protrudes quite a bit, but surprisingly, the C35 does not wobble when placed on a flat surface. The polycarbonate body's glossy finish looks unique in the subtle Glowing Green colour, but it's a big fingerprint magnet. The chiselled look gives it a modern aesthetic, but it's not the most comfortable to hold, mainly because of the relatively sharp edges.

The power button sits on the right side of the Realme C35 and doubles up as a fingerprint reader. I often found it hard to locate, mainly because it's recessed into the frame and has little travel.

The 6.6-inch full-HD+ LCD panel has a standard 60Hz refresh rate and features a dewdrop-style notch. It's not all that intrusive when viewing content, but it does look a bit dated. The bezel around the display is reasonably slim at the top and the sides but is quite thick at the bottom. The bottom of the C35 has a 3.5mm headphone jack, primary mic, USB Type-C port, and speaker.

The Realme C35 has a Unisoc T616 SoC which has a maximum clock speed of 2GHz. This is a surprise given that most smartphones that feature Unisoc SoC's are entry-level models. The phone has a SIM tray with two slots for two nano-SIMs and a dedicated one for a microSD card (up to 1TB). Communication standards include support for 4G/LTE bands, dual-band Wi-Fi, Bluetooth 5 and satellite navigation systems.

The Realme C35 runs Realme UI R Edition, which is a lightweight version of the regular Realme UI that skips resource-intensive features and customisation options for smoother performance. It is based on Android 11. While this sounds like a good idea, Realme still preinstalls several third-party apps. These can be uninstalled, but it somewhat defeats the purpose of running a leaner operating system.

The overall usage experience was not the best, as it always felt as though the Realme C35's hardware was struggling to keep up with software. I faced random instances of lag and stutter while scrolling through lists and launching apps. In short, the Realme C35 performed more like an entry-level smartphone than something at its price level.

While the software experience was not up to the mark, the Realme C35 performed as expected in benchmark tests. It managed scores of 2,12,939 in AnTuTu along with 368 and 1,382 in Geekbench's single and multi-core tests respectively.

The Realme C35 manages to pack a 5,000mAh battery inside its slim body

The display of the Realme C35 produces saturated colours at the default screen settings, but changing from 'Vivid' to 'Gentle' delivered more accurate results. The full-HD+ LCD appeared sharp and was bright enough for outdoor use, even under direct sunlight.

Gaming on the Realme C35 was not a great experience. The Unisoc SoC struggled to play any game smoothly. Casual titles such as Subway Surfers and Temple Run 2 stuttered a little, while games such as Call of Duty: Mobile lagged too much even at the lowest graphics settings.

The Realme C35's 5,000mAh battery lasted 10 hours and 56 minutes in our HD video loop test, which is well below average for a budget device. When it came to regular use, the C35 lasted a little over a day, which again is below average for a budget device. Charging the phone using the bundled 18W charger took two hours and seven minutes, which is on par with the competition.

The Realme C35 has three rear-facing cameras: a 50-megapixel primary, a 2-megapixel macro, and a 2-megapixel black-and-white camera. An 8-megapixel front-facing camera is in charge of selfies. The camera interface is stripped down compared to the usual Realme camera app. There's no quick-access icon in the viewfinder to let you change settings on the fly.

Image quality when capturing photos in daylight was satisfactory at best. The dynamic range of the primary camera is decent for the most part, but details were surprisingly weak even when shooting photos in daylight. The HDR system was a bit too aggressive at times, so the sky looked abnormally blue and almost Photoshopped in some shots. Macros looked oversharpened and overprocessed.

Portrait mode is only available on the rear-facing camera. It did a decent job with edge detection, but  backgrounds appeared overexposed even though the subject had good detail. Portrait mode only worked on people and not on objects, for some reason.

In low light, image quality dropped quite a bit. The camera usually struggled to lock focus in dimly lit conditions, and images looked quite soft. Switching to Night mode did result in slightly better contrast but photos turned out soft and blurry, which made things seem worse overall..

The Realme C35 can record videos at up to 1080p at 30fps. The quality was strictly average in daylight, and footage also appeared quite shaky, due to the lack of any stabilisation. In low light, videos looked quite noisy. The camera had lots of trouble locking focus, especially when panning.

The lower end of the budget smartphone segment offers plenty of choices these days. Realme has quite a selection of models to choose from, many of which are priced pretty close to one another. Poor camera performance and sub-par battery life are the biggest weaknesses of the Realme C35, even considering its price. Its design is the only feature that makes it stand out.

As far as alternatives go, the Realme Narzo 50 is available starting from Rs. 12,999, and offers much better hardware including a MediaTek SoC, 120Hz display, higher resolution selfie camera, and 33W charging. We haven't reviewed it yet, but going by specs, it should offer much better performance than the C35.

Beyond Realme, there's also the Micromax In 2B (Review). It offers a smoother (and bloatware-free) software experience and much better gaming performance at a lower price. Motorola's Moto G31 (Review) is now available at Rs. 11,999, and this phone offers a near-stock Android software experience, an AMOLED display, and a water-repellent design. All these options should offer far better value and performance than the Realme C35, which makes it incredibly hard to recommend.