Motorola’s Moto G31 packs in a few upgrades over the G30, but falls a bit short of the competition when it comes to execution 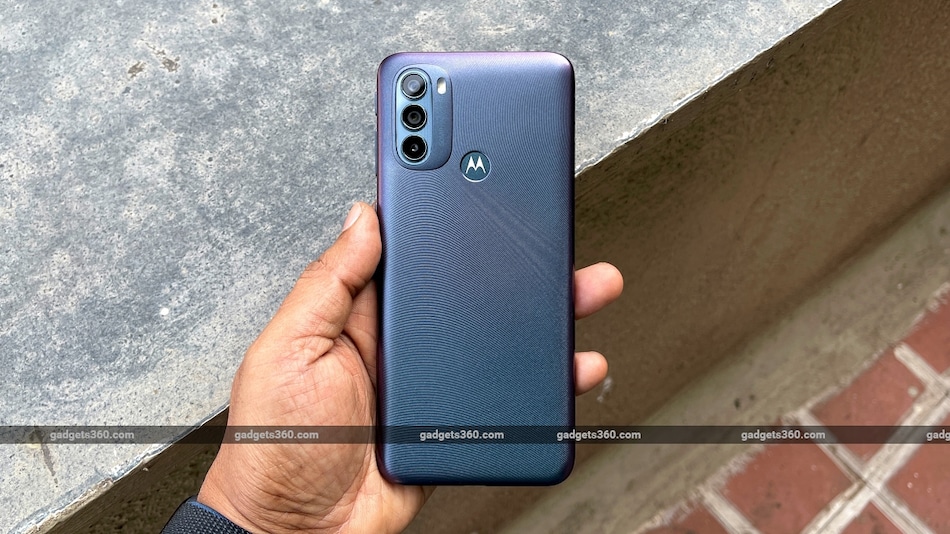 We reviewed the Moto G30 earlier this year, and it turned out to be a safe all-rounder, shooting good photos in daylight and offering solid battery life, plus the 90Hz refresh rate display was a nice bonus. While not much has changed with the G31 in terms of design, there have been a few upgrades and there are now fresh competitors to take on. So, is the new Moto G31 an all-rounder like the Moto G30?

The Moto G31 looks very similar to its predecessor, the Moto G30. It's made of polycarbonate and features a unibody design that feels solid. It offers a good grip thanks to a fine groove-like texture at the back and is relatively slim at just 8.54mm. It has an IPX2 rating for slight water resistance, which is a bit of a downgrade in comparison to the G30, which had an IP52 rating for dust and water resistance.

The Motorola Moto G31 is made of polycarbonate

Thanks to the texture at the back and the matte finish, the phone gathered no fingerprints. Its display also remained smudge-free during the review period. I often struggled to find the barely recessed fingerprint reader, which sits on the rear under the Motorola logo, but it unlocks the phone instantly. There's only one speaker and it sits at the bottom next to the primary mic and USB Type-C port.

The Moto G31 features an AMOLED display with a hole-punch cut-out for the camera, which looks modern compared to the notched display on the Moto G30. While the borders at the top, left and right looked adequately thin, the one at the bottom is noticeably thicker.

There are four buttons on the right side, including a dedicated button for the Google Assistant

I did not like the layout of the physical buttons on the Moto G31. There's a dedicated Google Assistant button, which sits almost at the top right corner of the device, high above the power button and the volume keys. The Assistant button makes little sense given its inconvenient location, but it might come in handy given that this device cannot wake up and perform actions when locked in response to voice commands.

The Moto G31 packs in a MediaTek Helio G85 processor and offers up to 6GB of RAM and 128GB of storage. Storage is expandable by up to 1TB using a microSD card in the hybrid dual-SIM tray. Communications standards include 4G LTE, Wi-Fi ac, Bluetooth 5, and several satellite navigation systems. The phone has a 5,000mAh battery and comes with a 20W charger in the box.

Motorola ships the Moto G31 with a near-stock version of Android 11. It does have some customisation options, including the ability to change the accent colour, font, and icon shapes. There are also the usual Moto gestures and the Moto peek display feature which lets you interact with notifications while the phone is locked. The software experience does not include any third party apps, which we see on most competing smartphones, but there is a Dolby Atmos app, which is used to enhance the audio experience.

The software experience on the Moto G31 was smooth overall with regular use. Upgraders will miss the fluid 90Hz display from the Moto G30, but performance was good and apps remained in memory for a long time. The 6.4-inch AMOLED panel offers deep blacks and makes for an immersive viewing experience when watching movies and playing games. The phone has Widevine L1 DRM certification, which allows for full-HD playback resolution in streaming apps. The Moto G31 has a single bottom-firing speaker that was loud enough, but just not as immersive as the stereo speakers found on competing smartphones.

I received the 4GB RAM variant for review and it managed average scores for a budget smartphone in our benchmark tests. The Moto G31 scored 1,55,315 points in AnTuTu and 346 and 1,241 respectively in Geekbench's single and multi-core tests. The G31 managed 39fps and 8.7fps in GFXBench's T-Rex and Car Chase benchmarks respectively, and scored 1,799 and 1,408 points in 3DMark's Sling Shot and Sling Shot Extreme benchmarks. However, there are smartphones with MediaTek Helio G88 and G95 SoCs in this price segment that performed better.

The Moto G31 offers a basic budget smartphone gaming experience. The phone can handle most games at low graphics settings but nothing more. I experienced some stuttering and lag when playing Call of Duty: Mobile at the default Low graphics and Medium frame rate settings. Asphalt 9: Legends ran smoothly at the Default graphics setting with some occasional lag when there was a lot of action happening on screen. The phone did warm up after about 30 minutes of gaming, beyond which performance took a hit. Indeed, this is a smartphone that's mainly built for simple everyday tasks and playing casual games.

The Moto G31 has a hybrid dual-SIM tray

Battery life was quite good on the Moto G31. Its 5,000mAh battery lasted a day and a half of use which included some gaming. The phone managed a reasonable 18 hours and 32 minutes in our HD video loop battery life test. Charging speed was decent with the bundled 20W charger. The Moto G31 went from a dead battery to fully charged in 2 hours and 33 minutes.

Motorola has reduced the number of rear-facing cameras on the Moto G31. The Moto G30 had four, which included a dedicated 2-megapixel depth sensor. On the Moto G31, the 8-megapixel ultra-wide-angle camera does double duty as the depth camera when shooting photos using the Portrait mode. The primary camera now features a 50-megapixel sensor instead of the 64-megapixel one on the Moto G30, and there's also a 2-megapixel macro camera. Selfie duties are handled by a 13-megapixel front-facing camera.

The camera app interface is typically Motorola, with a customisable list of camera modes in a very simplified layout. Most of the settings are hidden under the gear icon. Oddly, the camera interface offers no option to select the video recording resolution, and does not have a symbol or icon to tell you what resolution it's recording at either.

Photos taken in daylight showcased mostly natural colours with decent dynamic range. Most of the photos I took ended up looking a bit dreamy thanks to the aggressive HDR, but this also ensured good detail in darker areas of each frame. The ultra-wide-angle camera was not good and mostly ended up overexposing scenes, producing blurry details and noticeable barrel distortion.

Autofocus locking was a bit slow especially when shooting close-ups of objects. These photos showed good detail, but often had overexposed backgrounds or blown-out highlights. Macro photos did not have much detail and I preferred using the primary camera as shots came out sharper with better detail, and can be cropped. Selfies came out fine provided I didn't use the Portrait mode, which often resulted in blown-out backgrounds.

Low-light photos came out quite blurry. The Night mode managed to make shots sharper but they were still very low on detail. The Portrait mode never seemed to work in low light. Video quality overall was decent at best with the exposure changing quite drastically when panning. Low-light video was quite poor.

With prices starting from Rs. 12,999, the Motorola Moto G31 offers a high-quality AMOLED display, a water-resistant body, and a near-stock Android software experience. However it isn't on par with its predecessor in some regards, and its imaging capabilities are a mixed bag and far from consistent. It's not an all-rounder but might still be a good fit for those looking for a vanilla Android software experience. The Nokia G20 is the only other phone that offers this in this price segment, and as I pointed out in my review, it is an underpowered device.

If you don't mind some Android customisation and preloaded apps, there are smartphones such as the Infinix Hot 11S (Review), which are priced lower (starting from Rs. 10,999) but offer better specifications along with better gaming and camera performance. There's also the Realme Narzo 30 (Review) which offers a high-refresh-rate display and a Helio G95 processor at a slightly higher price, starting from Rs. 13,499. Finally, there's the Redmi 10 Prime (Review) which offers a bigger battery and a 90Hz display at the same price.