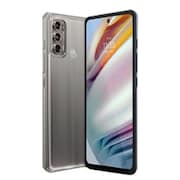 A smartphone with a 108-megapixel camera under Rs. 20,000 might have seemed unlikely, but it looks like anything is possible in 2021. There are now three smartphones in the market that sport 108-megapixel primary cameras while being priced under Rs. 20,000. The latest and the most affordable one is the Moto G60 which is priced rather aggressively at Rs. 17,999. Has Motorola done a good job with this phone or are there some compromises waiting to be discovered? I put the Moto G60 to the test to find out.

The Moto G60 s the first Motorola smartphone with a 108-megapixel camera and is priced quite aggressively. The Moto G60 is a big and bulky phone measuring 9.8mm in thickness and has a weight of 225g. This makes single-handed use a little tough. It has a big 6.8-inch LCD display with a 120Hz refresh rate. It has a hole punch at the top that houses the 32-megapixel selfie camera.

Moto G60 is powered by the tried and tested Qualcomm Snapdragon 732G processor and delivers good performance. It has only one variant in India offering 6GB of RAM and 128GB of storage. Storage is further expandable using the hybrid SIM slot. The Moto G60 houses a 6,000mAh battery which makes it bulky. The battery offers a day and a half worth of battery life but charging time is long as the phone only gets a 20W charger in the box.

The Moto G60 has a triple camera setup at the back but does the job of four cameras. It has a 108-megapixel primary camera, an 8-megapixel ultra-wide angle camera that also clicks macros, and a depth sensor. Photos clicked from the Moto G60 were average and not as sharp as some of the other competition in daylight. The ultra-wide angle photos are upscaled to 12-megapixels and had some distortion.

Lowlight photos were also average as the phone failed to get the colour tone right. Night mode does not return a brighter image but fixes the colour tone issue. Motorola ships the Moto G60 with Android 11 with only the Facebook app pre-installed. This is a big plus considering most of the completion has spammy bloatware preinstalled.