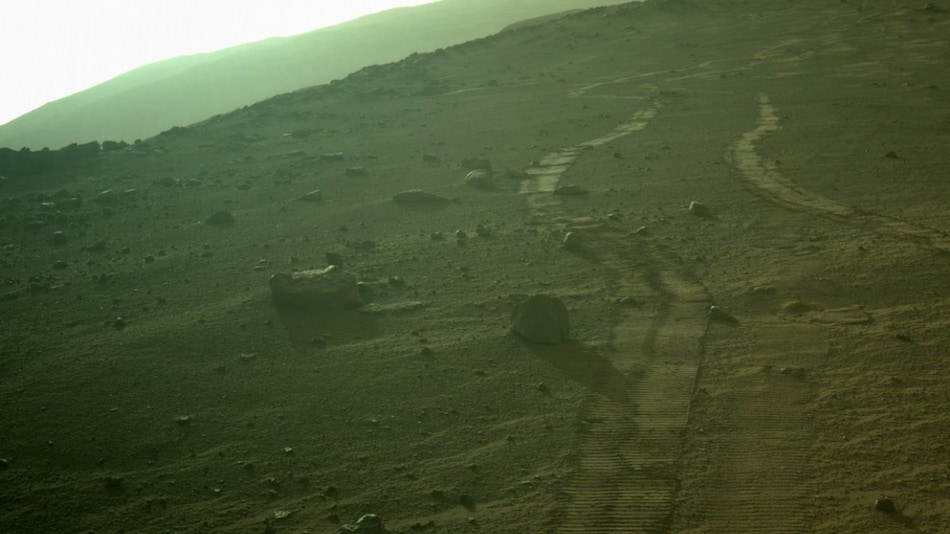 This photograph shows Perseverance's tyre tracks on the Martian surface

NASA's Perseverance Mars rover has set a record on the Red Planet. Thanks to its self-driving function, the rover has covered the greatest distance in a single Martian day, or sol, by any rover on the planet. Perseverance, which was launched on July 30, 2020, and landed on Mars on February 18, 2021, recently covered a record 245.76m in one Martian day, which is slightly longer than one day on Earth. The aim of the Perseverance rover and its accompanying helicopter Ingenuity is to find signs of ancient life on the planet.

“After a few months exploring this area, I'm on the move,” stated a tweet from the official Perseverance handle. The tweet added that the rover can now cover more distance in one day than ever before because of its self-driving function. The tweet carried an image that showed the rover's tracks on the Martian surface.

After a few months exploring this area, I'm on the move. Thanks to my self-driving function, I can cover more ground in a day than ever before. Just set a new Martian record of 243.3 meters, and then yesterday, another: 245.76 meters. Places to go, rocks to see! ???? pic.twitter.com/XCHSdN1mZB

According to a NASA report, the previous record for longest drive on Mars was held by its Opportunity rover, which travelled 214m in a single day in 2015.

Perseverance is currently busy roaming around the planet collecting rock samples to send back to Earth via future human missions to Mars. While transferring the sample to its storage, it had choked its systems in December. After almost a week of complex operations, engineers were able to get the rover back to proper functioning.

Perseverance will now attempt a multi-kilometre drive to the nearby delta. But before that, it is scouting the area to make sure it has not left anything to chance. Deltas are areas where water once flowed. They could hold information that could help scientists study whether there was microbial life on Mars long ago.

NASA stated in a blog that the Perseverance team has been “taking long-distance observations” of the delta and layers along Artuby ridge to prepare the team for its next phase of science operations.