Gamers in India will need to wait for some time to experience the Samsung Gaming Hub, though. 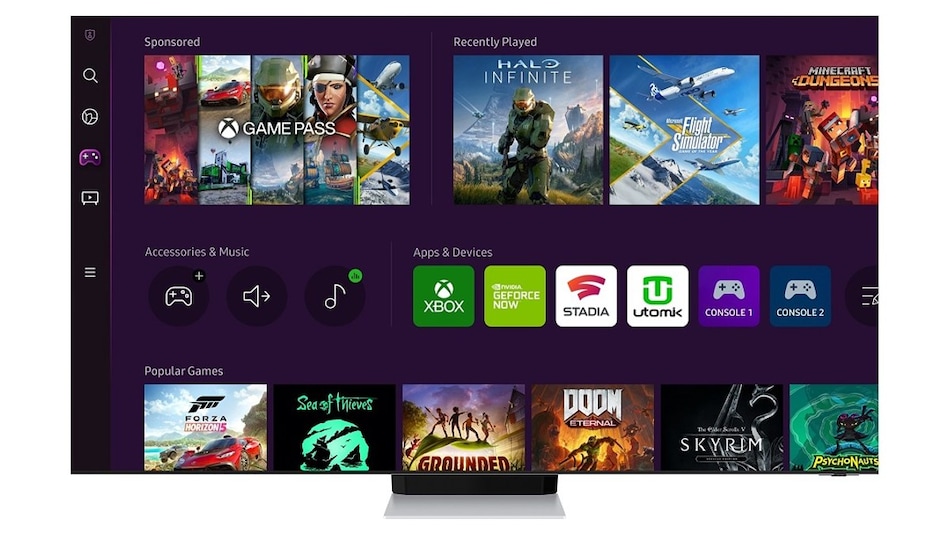 Samsung Gaming Hub has debuted for all 2022 Samsung Smart TVs and monitors to let users quickly access Nvidia's GeForce Now, Google Stadia, Utomik, and the Xbox app. The new offering, which was announced at CES 2022 in January, works as an all-in-one game streaming discovery platform to let gamers access multiple cloud services from a single screen. The Gaming Hub will show the HDMI-connected video game consoles and supports popular Bluetooth headsets and controllers.

The Gaming Hub is rolling out to the Samsung Smart TV models, including the 2022 Neo QLED 8K, Neo QLED 4K, QLEDs, and 2022 Smart Monitor series. It will let users access Nvidia's GeForce Now, Google Stadia, Utomik, and the Xbox app. Samsung will also include support for Amazon Luna in the future.

Although a list of smart TVs give access to cloud services including GeForce Now and Stadia, Samsung is trying to catch the attention of some gamers by introducing Microsoft's Xbox TV app. This has been long anticipated and was promised in November 2020.

The app brings access to Xbox Cloud Gaming and lets you stream Fortnite for free. However, you will be required to subscribe to an Xbox Game Pass Ultimate to get over a hundred games to play on the TV.

In addition to giving access to all the popular cloud gaming services, the Samsung Gaming Hub shows curated recommendations to users based on "the latest and most popular games" available for playing.

The Gaming Hub also integrates music and streaming services to let you connect to platforms including Spotify, Twitch, and YouTube directly from the experience menu. Additionally, users can access the latest gaming news, watch tutorials, play music and podcasts, and view trailers directly from the hub.

Samsung is initially rolling out the Gaming Hub in the US, UK, Canada, Germany, France, Spain, Italy, South Korea, and Brazil. There is no word on when it will be available on eligible Samsung TV and monitor models in India.

Gadgets 360 has reached out to Samsung for a comment on the India rollout of the Gaming Hub in India and will update this article when the company responds.