Waterproof fitness watch with notifications, at an affordable price. 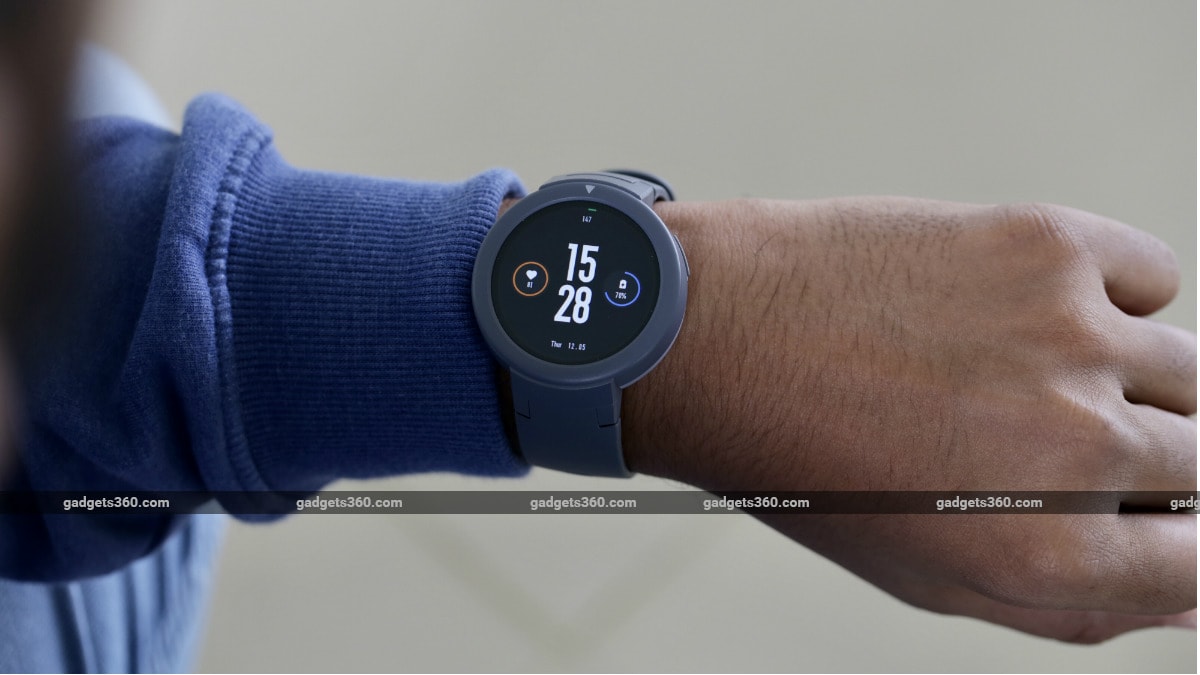 Amazfit has been launching wearables in India at a relentless pace, and the Verge Lite is the latest one that we received for review. The Amazfit Verge Lite is a fitness watch with notifications, and with a sub-Rs. 10,000 price it could appeal to lots of people who want something more than a fitness band but aren't yet ready to splurge over Rs. 20,000 on a full-fledged smartwatch. This is not to be confused with the Amazfit Verge, which is more of a traditional smartwatch with more apps, lower battery life, and the ability to make calls. Read on to find out whether you should buy the Amazfit Verge Lite.

The Amazfit Verge Lite doesn't look particularly striking. While it is quite light, it is certainly not very comfortable to wear. This is partly due to the wristband, which uses silicone and polycarbonate, according to Amazfit. After a few hours of wearing the Amazfit Verge Lite, we had to take it off. We also noticed that it would cause discomfort, particularly when our hands were sweaty. We didn't feel the discomfort until we wore this watch for a few hours. This is a major concern for us.

The body of the watch is made of polycarbonate and it feels quite cheap, though we can excuse this considering the price point. The plastic buckle on the strap offered a secure fit, and we found it satisfactory. It's good to note that the strap can be replaced.

The base of the Amazfit Verge Lite has a heart rate sensor and pins for charging. Once again, we're seeing a proprietary charger shipping with an Amazfit product. You can only place the watch in its cradle one way, which is good. There is a single button on the right side, which serves to select things and also to return home. We'll get to that in a bit.

Amazfit Verge Lite has a heart rate sensor at the base

The display of the Amazfit Verge Lite is quite good. It is a 1.3-inch AMOLED screen that works fine in all lighting conditions, and having a colour display is a nice bonus. Amazfit says it has used Corning Gorilla Glass 3 for protection, which is also a good touch.

Let's start with the button we just mentioned. The Amazfit Verge Lite's single button can be a bit confusing to use. Sometimes, you can press it to return to the home screen, but when you are inside some apps such as the Workouts app, pressing the button will show you details of your ongoing workout. Here, a long-press lets you end the workout. Getting used to the navigation scheme takes a bit of time, and this is a bit of a disappointment.

There aren't too many apps, and no app store for third-party ones, so you can only do basic things such as track workouts, control music, set alarms, and check notifications on the Amazfit Verge Lite. You can think of this product as a fitness watch with support for notifications, not a fully functional smartwatch. You can't reply to notifications or answer calls (but you can reject or silence incoming ones). Given its price, that's not a problem, but you should know what you're getting.

Notifications make this watch pretty useful, but the vibration is too strong. We found ourselves wishing for the ability to set custom vibration patterns like you can on the Mi Smart Band 4 (Review) or Amazfit Bip Lite (Review). Sadly, the Verge Lite doesn't have this feature even though it costs more. You can pair the Verge Lite with both Android and iOS devices.

There's just a single button on the Amazfit Verge Lite

The companion app for the Amazfit Verge Lite is quite similar to the one for Mi Smart Band 4. The app does its job fairly well and it's not too difficult to find the data you need. It still could use a bit more polish, but that's not a major complaint.

The Amazfit Verge Lite has an IP68 rating for water and dust resistance. We took this watch into the shower multiple times and it survived. To measure its performance, we ran our standard tests starting with the step tracking test. Here, we walked 1,000 steps while counting each one manually, and then checked how many the Amazfit Verge Lite had logged. The result was 997 steps tracked by the wearable, which is very accurate.

Then we ran our standard distance tracking test, for which we walked 1km (a distance measured using a car's odometer). The Amazfit Verge Lite has built-in GPS functionality, and it logged the distance as 1.07km. This is acceptable because the route we use for testing goes under a flyover and has flummoxed many GPS-enabled devices in the past.

We also went to a gym and logged strength training sessions using the Verge Lite. The results here were satisfactory. While the heart rate sensor was reasonably accurate most of the time, we found it to be a bit slow to react when we were doing high-intensity interval training. The Amazfit Verge Lite took more time than usual to register heart rate spikes, which might disappoint some people.

This watch also features automatic sleep tracking, and it worked fairly well in our experience. It was pretty good at recording our sleep and wake-up times, but it said we spent zero minutes awake in between every night, which was definitely not true. We woke up a number of times when we were testing the sleep tracking functionality, and the watch was failed to log that.

Battery life for the Amazfit Verge Lite was pretty good during our review period. We had notifications enabled and we logged a few workouts and runs using GPS during our time with the device, and we still found it to last for over two weeks on a single charge.

The Amazfit Verge Lite's Rs. 6,999 price tag is pretty attractive for the feature set it offers. The Verge Lite performed fairly well in our tests — step tracking and distance tracking were accurate, and its battery life is good too. It has a nice display and is waterproof, which is always good.

Having said that, there are a few things that stop us from recommending this product wholeheartedly. The Amazfit Verge Lite isn't particularly comfortable to wear for long hours, its vibration is too strong and makes notifications annoying, and it feels a bit plasticky. If any of these things is a dealbreaker, you could consider the Amazfit Bip Lite (Review) or Amazfit Pace (Review), but you'd have to live with an inferior display on either of those products.