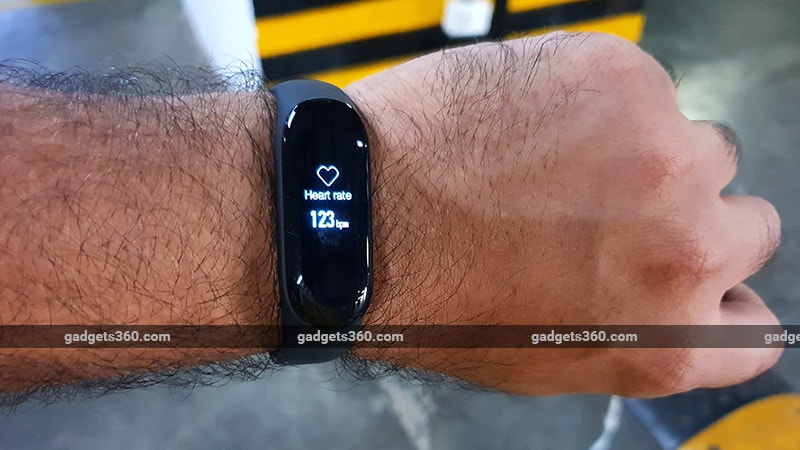 Mi Band 3 price in India is Rs. 1,999 but is it the best budget fitness tracker around? Read on

Xiaomi has made a name for itself in the fitness wearables space with its affordable Mi Band series. One of the things we really like about these devices is that they have so far been accurate and have offered really good value for money. The very first Mi Band made such products available to the masses at low prices. The next iteration introduced a display and added a few more useful features. Now, Xiaomi's latest fitness wearable, the Mi Band 3, takes things even further by introducing a touchscreen. People have high expectations for this product, but can it deliver at its Rs. 1,999 price point? We put it to the test to find out.

Xiaomi's design for its Mi Bands has roughly been the same all along. You have a capsule that has all the guts of the Mi Band 3 and a strap made out of thermoplastic elastomer which latches securely onto your hand. The capsule has grown in size and the Mi Band 3 has the biggest one yet in the series. It is curved at the sides and is slightly extruded from the strap when snapped in place. The OLED display is also bigger than the one on the Mi Band 2, and it is also brighter making it more legible outdoors.

There are grooves on the side of the capsule which allow the strap to hold it in place. This also helps prevent the capsule from popping out when you are running, something the original Mi Band was notorious for. Xiaomi ships a USB charging cable in the box which can be plugged into any adapter or a laptop to charge the capsule. The Mi Band 3 has a tiny dimple below its touchscreen which is a capacitive button. This button has two functions — a single tap to go back, and a long-tap to accept. Turn the capsule around and you can see the slightly raised heart rate sensor.

The quality of the strap is quite good. The clasp latches firmly and never came undone during the duration of this review. We did notice that the strap has more adjustment holes compared to the Mi Band 2, which should help users find a comfortable fit, even those with thinner hands.

The Mi Band 3 has a capacitive touchscreen

The Mi Band 3 pairs with a smartphone using the Mi Fit app and Bluetooth 4.2 LE, which keeps the power consumption down. The app is available on both the Google Play Store and the Apple App Store, and it is very easy to pair the band with a phone. When using the Mi Band 3, one can swipe upwards to go through various bits of information. When there is more than one readout available, you will see a scroll indicator hinting that you can swipe right to left to see more.

The Mi Band 3 displays a lot more information than the model it replaces. Apart from the time and date, you can check the number of steps taken, distance covered, calories burned, battery level, a three-day weather forecast, heart-rate, and a stopwatch. You can also switch the ringer profile of the phone (Android only), use the band to find your phone, and start recording exercise sessions directly from the band.

The Mi Fit app remains unchanged, but the Mi Band 3 does get a few new settings under the Device tab. One of them is a night mode that dims the display automatically at sunset or a scheduled time. Select Heart-rate Detection lets you turn automatic detection off, pair it with sleep tracking for better accuracy, or just keep it on. When switched on it gives you the option to track your heart rate at set intervals, with the lowest being one minute.

The Mi Band 3 can also handle notifications and phone calls. We had paired it with a Samsung Galaxy S9 (Review) and found that it displayed the telephone number for an incoming call instead of the caller's name, even when the contact was in our address book. It gives you the option to mute incoming calls or reject them entirely, using the capacitive button. The band manages notifications quite well and also saves these notifications until you clear them.

Activity tracking with the Mi Band 3 is very accurate. To check the accuracy of the step counter we went for a walk and counted 1,000 steps manually. The band reported 1,004 steps, which is very good, and the minor deviation can be accepted. We went for a walk for a distance we knew was exactly 1km, and the Mi Band 3 recorded the distance to be 1.12km. This is because non-GPS trackers like the Mi Band 3 can only estimate the distance you cover, so if accurate distance tracking — and not just steps — is important, you should look at more expensive alternatives.

The deviation was even larger when we used the Mi Band 3 on a treadmill with the exercise mode enabled. After we finished 2km on the treadmill, the band displayed 1.68km. This is primarily because the band cannot gauge stride length when on a treadmill, but we did have the option to calibrate distance after finishing a run.

While in exercise mode, the band displays the time and constantly tracks your heart rate. You can also use it for outdoor runs, where it uses GPS data from your paired phone for better distance tracking.

Sleep tracking is also supported on the Mi Band 3, and we found it to be accurate compared to the Xiaomi Mi Band 2. It also has a vibrating alarm, which we liked. It's powerful enough to wake you up without disturbing anyone else in the room.

Xiaomi's smart bands are known for their battery life but the Mi Band 3 has lower battery life than its two predecessors. With notifications switched off and the band only tracking steps and sleep, the battery reported 50 percent remaining after 8 days of use. With more features enabled, including heart-rate monitoring while sleeping, notifications, and the exercise mode while working out, we saw a faster dip in the battery level. To charge the Mi Band 3 you will need to remove the capsule from the band and use its proprietary charging cable with any computer or USB adapter.

Verdict
The Xiaomi Mi Band 3 is the latest in a series that has already made a name for itself in the fitness tracker space in India. It is accurate for step tracking, and the touchscreen helps in navigating through the options that this device has to offer. The battery life is lower than that of the Mi Band 2, but is still better than what most other fitness bands in the market deliver. Xiaomi's aggressive pricing of Rs. 1,999 makes it a good value-for-money offering as well.