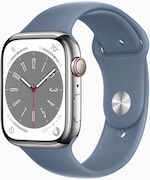 India is the biggest smartwatch market globally in Q3 of 2022, accounting for 30 percent of worldwide smartwatch shipments. Apple and Noise are the leading brands in the high-level OS smartwatch and basic smartwatch segments respectively, as per a report from Counterpoint.

Apple launched a brand new model of its Apple Watch called the ‘Ultra' at this year's ‘Far Out' launch event and it has been a major talking point. It's bigger, chunkier, offers better hardware, and is designed keeping in mind a very special set of users. Another thing that the Apple Watch Ultra managed to do is steal the show from the standard Apple Watch Series 8. The new model does pack a few upgrades over the previous Series 7, but not as much as we were hoping for. Is the new Apple Watch Series 8 worth upgrading to or should you stick (or upgrade) to the Series 7 instead?