The transition from .apk to .aab format will benefit both developers and users, according to Google. 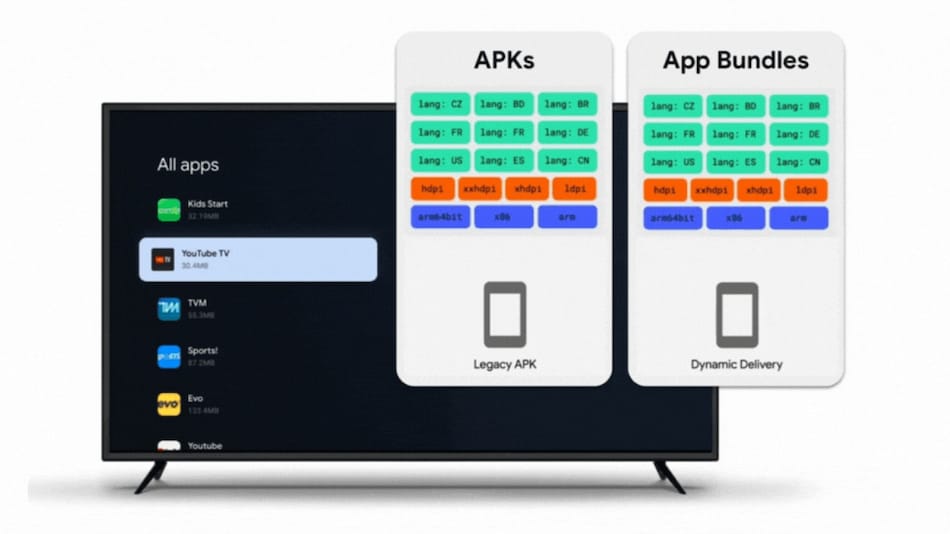 Apps submitted in the .aab format take up less space on devices

Google has announced via its official blog that it will be transitioning from the old Android Package Kit (APK) format to the newer Android App Bundle (AAB) system for its Android TV and Google TV apps. Developers for the two platforms have been informed about the change and Google said that the transition will happen in May 2023. While many app developers may have already made the switch, the need to switch to .aab format for app delivery is quite vital for smart TVs.

This gives developers of these third-party apps plenty of time to make the switch from the .apk files format to the newer .aab file format that has its own set of advantages, both for developers and users. Google has been pushing third-party smartphone app developers to transition to the same and put its foot down requiring all new app submissions to the Play Store to be made only in .aab format back in August 2021.

Google in its blog post explains how the switch to .aab from .apk will help reduce the package size by about 20 percent and also opens the door for ‘archiving' in which users don't need to uninstall an app completely, but can temporarily remove the parts of the app.

This allows users to retain their app data while freeing up or reclaiming about 60 percent of storage space, according to Google.

The newer format for apps is more vital on smart TVs as they often have limited internal storage space, forcing users to uninstall unused apps in order to install new ones. AABs are also applicable to a lot of other devices and platforms like phones, tablets, smartwatches and auto. For developers, the .aab file format also makes it easier to serve an optimised package for each device configuration instead of a one-size-fits-all approach which takes up unnecessary storage space.

As a user of an Android TV or Google TV-powered device, users shouldn't have to worry about the upcoming transition. The developers who plan on creating new apps or updating existing ones for the platforms from May 2023 onwards will need to use the new format for submissions. Google has given developers 6 months to transition to the .aab files format. The search giant believes that it is possible for a single engineer to convert an Android TV app from Android Package Kit (APK) to Android App Bundle (AAB) in three days, which seems like developers now have enough time to make the switch.