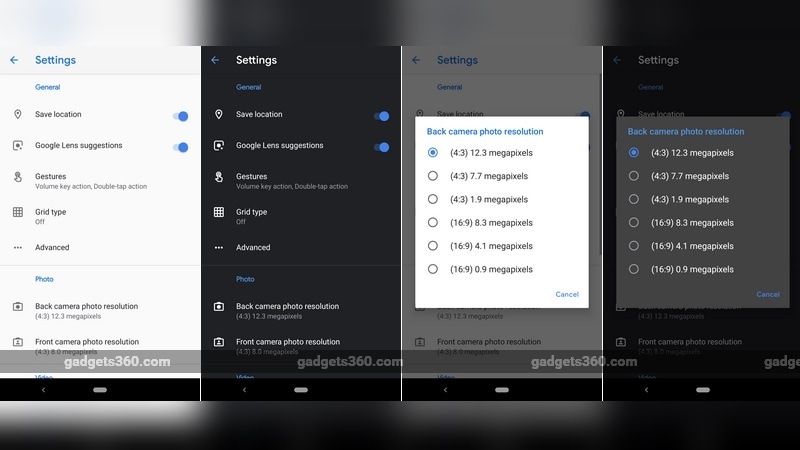 Google Camera app has received a new update that has introduced a host of new elements such as night mode overlay, UI changes, and mode switch transition effects among others. The changes are now live in the Google Camera app version 6.2, which is now available to download as a stable build. Aside from aesthetic and UI tweaks, the code of the updated app hints that Google might soon integrate the measurement functionality of the eponymous Measure app in the Google Camera app and it might be available as a ‘Measure mode'. Moreover, a time-lapse mode codenamed ‘Cheetah' might also make its way to the Google camera app in the future. There is no word on when the Cheetah time lapse and Measure mode will debut in the stable version of the app.

How to enable dark mode in Google Camera app

To check out the dark UI design in the Settings section of the Google Camera app, just follow this path: Settings > System > Advanced > Developer options > Night Mode > Always On. Once the Night Mode has been activated, the camera app's UI will automatically change to align with the dark theme.

When the screen flash is activated while taking selfies in Google Camera, the display shows a large flash icon

Also, when the screen flash is activated for clicking selfies, the display now shows a large flash icon. Moreover, the audio recording icon has been relocated to fall in line with the shutter button while using the Panorama mode. Lastly, the Google Camera app now shows the ‘Taking HDR+ enhanced photos' message while clicking photos with HDR+ mode enabled. The changes in the updated Google Camera app were spotted by Android Police.

While switching between camera modes in Google Camera, the screen will now show a zoom transition effect

New UI elements aside, code of the updated Google camera app has revealed details about two upcoming features, thanks to de-compilation of the app conducted by 9to5Google. As per the code seen in the teardown, the Google camera app might soon get support for the measuring functionality of Google's Measure app. As per the strings in the updated Google Camera app's code, the measurement tool might arrive as an integrated ‘Measure mode'.

The code also mentions something called ‘Cheetah', which is reportedly a time-lapse mode that “Records videos at faster speeds”. The Google Camera app's version 6.2 is now being rolled out via the Play Store. But if you are yet to receive the update, you can download the Google Camera app v6.2 from APK Mirror and check out the new UI elements.