Microsoft OneDrive on Android Will Now Cast Media to Chromecast, Other Compatible Devices

Microsoft OneDrive will only cast media it can play on the mobile app. 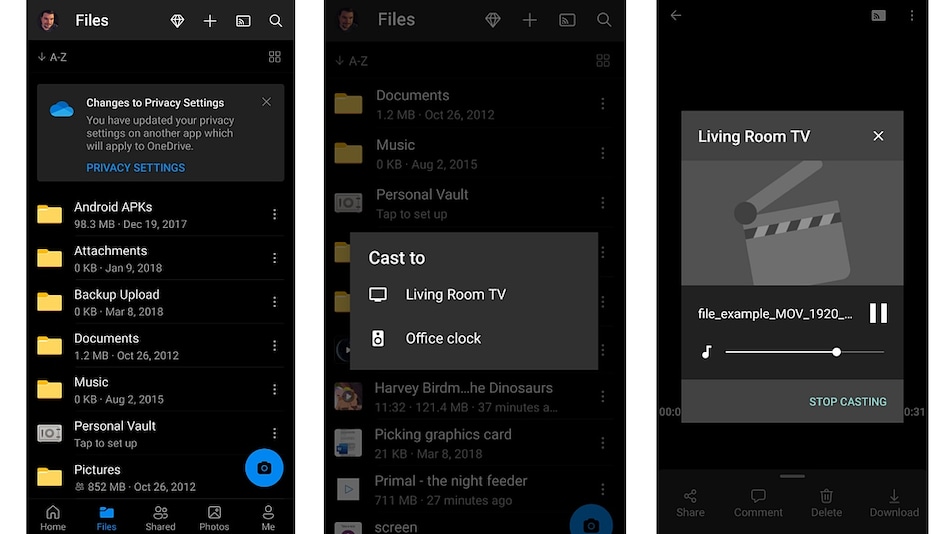 Microsoft OneDrive's casting feature is only available on Android

Microsoft OneDrive is receiving an update (v6.29.1) for its Android app that will allow users to cast media to compatible Chromecast and other casting devices. In February, Microsoft introduced an update that saw it get a new home screen, playback support for Samsung Motion Photos and 8K videos. Also, Microsoft has released a 64-bit version for OneDrive allowing users to transfer large files and also multiple files at a time.

The update for Microsoft OneDrive for Android was first spotted by Android Police. According to the report, Microsoft is introducing the update with the version 6.29.1 of OneDrive on Android - an update released on May 8. There has been no intimation from Microsoft regarding the update, beyond the listing on Google Play store, which reads "You can now display your media files on a Chromecast receiver or TV from a compatible device. Look for a Cast icon showing in the top toolbar. We hope you enjoy this top-requested feature!"

Gadgets 360 was able to view the feature, with the OneDrive app recognising our Android TV with Chromecast built-in, though the casting didn't start as expected. Perhaps the feature will require some more work before seamless support is enabled. Let us know in the comments section if the feature is working fine for you. Microsoft also hasn't announced if the update brings any other significant changes to OneDrive.

As mentioned, as per the changelog available on the Google Play Store, Microsoft OneDrive will get a new option for the toolbar present on the top of the screen. The new option will help users cast media to Chromecast or TVs with compatible casting options. It should also be noted that the casting option is only applicable on media files that support playback inside the OneDrive app. Also, this feature requires devices running Android 6 or higher.

Recently, Microsoft introduced an update that brought a new layout for the home screen on its Android app. Along with the new update, OneDrive will be able to support playback for Samsung Motion Photos and 8K videos on its app. The updated layout of the home screen will also show recently accessed files, files downloaded for offline use, and “On This Day” photos.

In other Microsoft OneDrive-related news, the cloud storage service has gotten a 64-bit release for the first time since it was launched in 2007. The new 64-bit version is ideal for using large files as it can access more memory. This will also aid in transferring large files, multiple files at a time. The tech giant has not announced the specific date on the release of the 64-bit OneDrive but has stated that compatible devices will automatically be updated once it is launched.