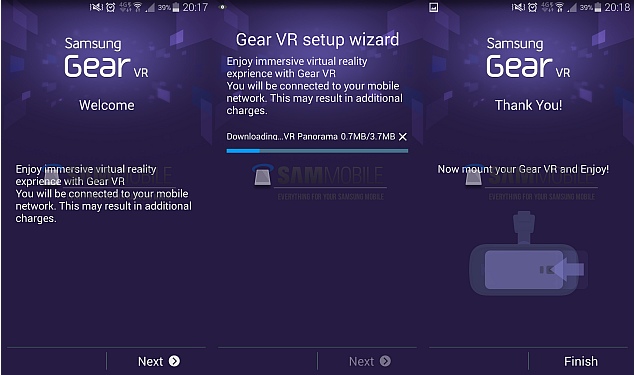 While on Thursday a report had detailed Samsung's partnership with Oculus VR to bring out its mobile VR platform for smartphones, on Friday another report claims to have access to an early version of the smartphone companion app for the VR platform, called Samsung Gear VR Manager.

The first report of Samsung working on a virtual reality headset had come back in May, with Oculus once again rumoured to be helping develop the software for the South Korean giant. In June, another report said the VR headset would be called Samsung Gear VR, and even detailed the modular smartphone-based functionality along with an alleged render image of the device.

Now, the same site that reported of the Samsung Gear VR headset - Sammobile - has released screenshots of the alleged Samsung Gear VR Manager. The companion app software is seen to include three main features, VR Panorama, VR Cinema and HMT Manager. While Sammobile says it wasn't able to access the first two features without the accompanying VR headset and smartphone, it managed to run the HMT Manager. 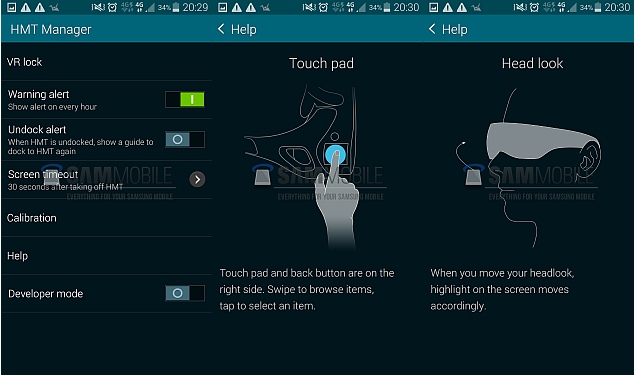 The site reports some HMT Manager functionalities on the Samsung Gear VR Manager app that indicate what was anticipated earlier, the Samsung Gear VR headset will be modular, and require the smartphone (thought to be the rumoured Galaxy Note 4) to be docked with it to operate. Called Undock Alert, the feature notifies the user the smartphone has been removed, and how to put it back. Other features were screen timeout, calibration, help and developer mode.

The help section details how to use the touchpad and back button to navigate the smartphone and VR interface, as well as how the back button doubles up as the 'see-through' button to view the outside world through the Gear VR setup. Also detailed, is S Voice support allowing users to issue voice commands to control the interface while in headset mode.

Along with 'head look' motion tracking, the leaked screenshots corroborate exactly what was leaked in the earlier report about the interface and buttons, along with the render of the headset. 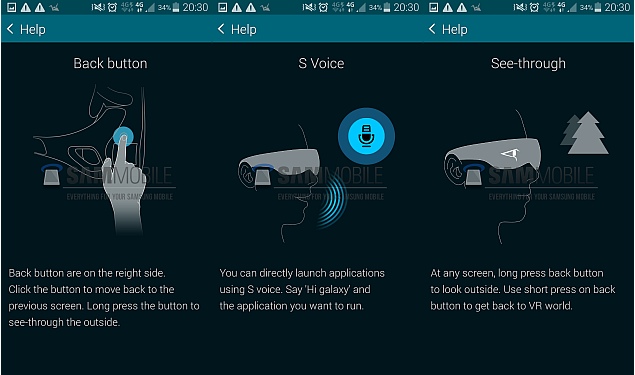 Also onboard is VR Lock and Warning Alert, where the former allows the user to apply a lock to the VR mode, and the latter warns users they have been using the virtual reality headset for a preset amount of time. Sammobile also details a lengthy setup wizard process to run the app for the first time.

Samsung is expected to roll-out the Gear VR headset at IFA 2014, which kicks-off in September. The company's reported partnership is also said to be mutually beneficial, helping Oculus bring its technology to the masses with Samsung's hardware expertise, market base and deep pockets, while Samsung benefits from the pioneer's experience in the now-booming field of virtual reality.