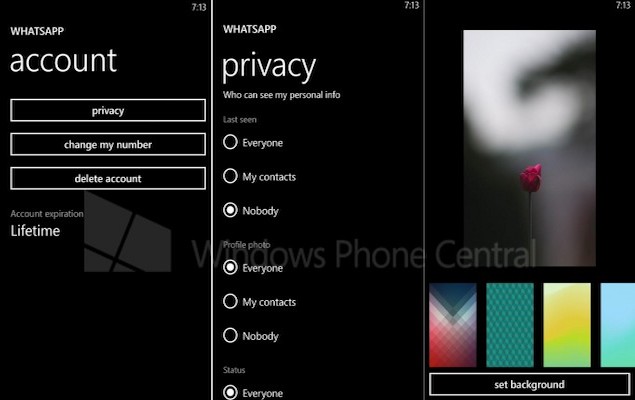 On February 21, it was reported that WhatsApp had brought the 'last seen' notification to Android devices, a feature that was already present on iOS devices. Now, according to recent reports, WhatsApp is bringing the hiding of the 'last seen' status feature to the Windows Phone app as well.

Reports claim the updated WhatsApp for Windows Phone app is in private beta (supposedly version 380), and has been rolled out only to a select list of users. Apart from the 'last seen' status notification, the updated app also brings in the background gallery. It is fair to assume that there will be a massive update in the coming days for the WhatsApp for Windows Phone app.

Reports of the WhatsApp for Windows Phone app in private beta claim users will also be able to control who in their contact lists see their profile photo and status, via the privacy control settings. The reports also mention that in the event users hides their status, they will not be able to view the statuses of their contacts as well.

Another new feature supposedly included in the WhatsApp for Windows Phone app is the Background Gallery. The team at WhatsApp is said to have added six new background wallpapers in addition to allowing users to take pictures, choose photos from an album, search pictures from the web and even delete pictures. In addition, features like Media Autodownload and Custom notification have also been spotted in the beta version.

There is still no word from the cross-platform messaging app developers as to when the updated app will go live, but it would be interesting to see as and when it does, how will it be received by users. A lot of discussion about Windows Phone as a platform not being an interesting one for app developers is going around, but, with the same updates rolling out for Windows Phone as are being rolled out for the Android and iOS platform, it seems like the attitude might be changing.

Ford admits looking beyond Microsoft for next-generation Sync, but BlackBerry deal not done yet
Samsung Galaxy S5 listed at two online retailers in Europe with pricing