There are initially 50 Android apps that you can download on your Windows 11 PC. 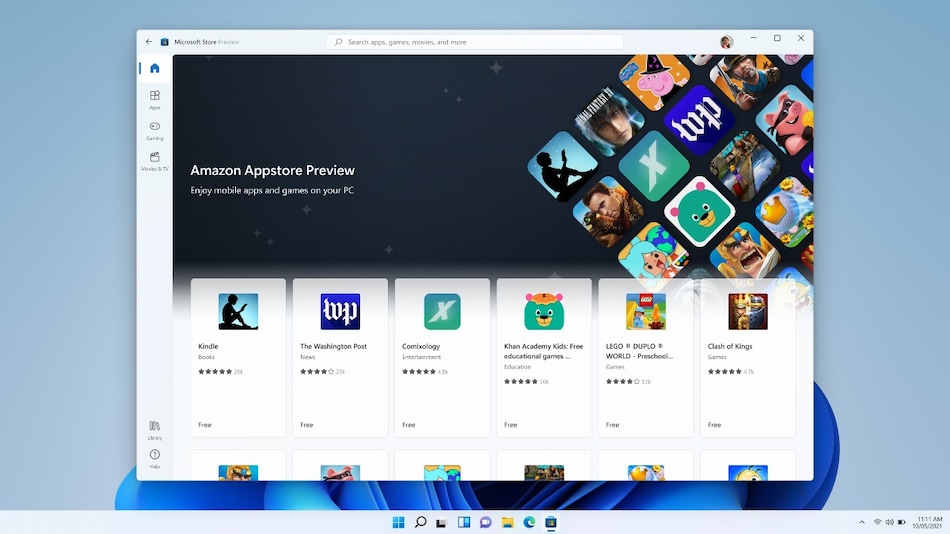 Windows 11 beta testers can now install Android apps on their systems directly through the Microsoft Store. The new experience comes months after Microsoft promised to bring Android apps support to Windows 11. Beta testers with Windows PCs based on AMD, Intel, and Qualcomm processors can test Android apps. Microsoft claims that there will be a familiar experience of running Android apps and games on Windows 11 as users will be able to run them side-by-side using the new Snap Layouts feature or pin any of them to the Start menu. Android apps are also integrated into the Alt + Tab function and Task view to let users move back-and-forth between the apps — just like how they can move between their regular Windows apps.

Initially, Microsoft has curated 50 Android apps for Windows 11 beta testers who are a part of the Windows Insider programme. These include mobile games such as Lords Mobile, June's Journey, and Coin Master, as well as apps such as Kindle, Khan Academy Kids, and Lego Duplo World.

The count of 50 Android apps on Windows 11 for beta testing is indeed quite insignificant when comparing with Google Play that has nearly 3.5 million apps. The Amazon Appstore, which essentially serves as the bridge for enabling Android apps support on Windows 11, also has over 460,000 Android apps.

Microsoft has integrated the Amazon Appstore within the Microsoft Store to let users download and install Android apps on Windows 11 computers. The company also claims that the experience of running Android apps and games on the latest Windows operating system will be as fluent as running a native app. This means that users will be able to interact with Android apps via mouse, touch, or pen input and run them side-by-side using the Snap Layouts feature, pin them to the Start menu or Taskbar.

“We have built the experience with accessibility in mind; many Windows accessibility settings apply to Android apps and we are working with Amazon to deliver more improvements,” the Windows team said in a blog post.

Microsoft has added a new component called Windows Subsystem for Android in Windows 11 that runs in a Hyper-V Virtual Machine, similar to the Windows Subsystem for Linux. It includes the Linux kernel and the Android OS based on the Android Open Source Project (AOSP) version 11 to enable Android apps support. The subsystem is also distributed through the Microsoft Store as part of the Amazon Appstore install.

Over time, Microsoft is aiming to bolster the Windows Subsystem for Android by adding support for “more APIs, capabilities, and scenarios” to make it capable of running additional Android apps.

The new Windows Subsystem is available across all Windows processor types, including AMD, Intel, and Qualcomm. Microsoft is also working closely with Intel to use the Intel Bridge Technology for enabling Arm-only apps to run on AMD and Intel devices. Further, the Redmond company does have plans to directly connect with app developers to publish their Android apps to the Amazon Appstore for their access on Windows 11 PCs in the future.

At this moment, limited Android apps support is only accessible through the Beta Channel of Windows 11 in the US. This means that you need to make sure that your Windows 11 PC is set to the US region. The Amazon account you are using should also be US-based to download Android apps via the Amazon Appstore.

Microsoft first showcased Android apps support on Windows 11 at the time of showcasing the new platform in June. It, however, confirmed in September that Android apps won't be a part of the first Windows 11 release that debuted earlier this month.