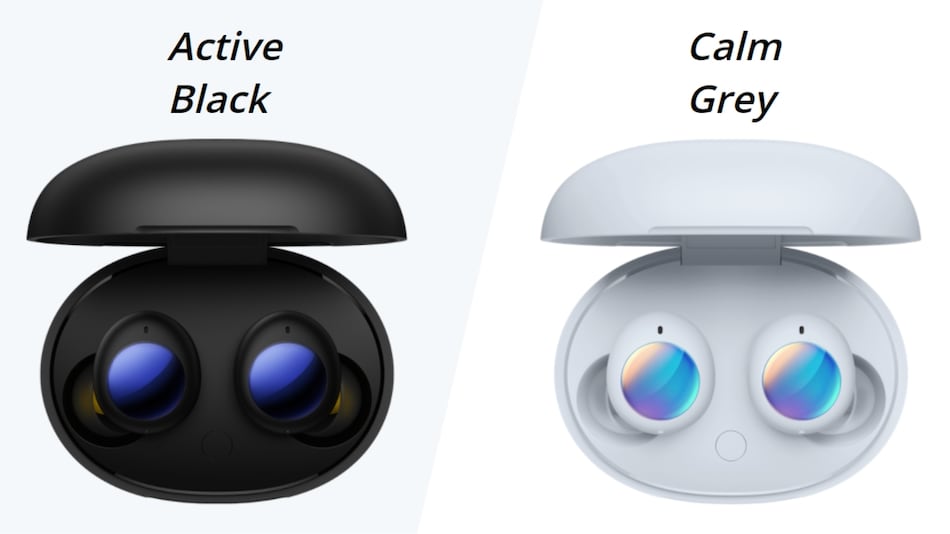 Realme Buds Air 2 Neo true wireless stereo (TWS) earphones have been launched in Pakistan. As per the company, the earphones offer a total of up to 28 hours of playtime on a single charge. The earphones are equipped with dual-mic noise cancellation for sharp and clear calls, active noise cancellation (ANC), as well as Transparency Mode that helps users listen to environmental sound clearly without removing the earphones. The earbuds can be connected to Realme Link App that allows users to set up touch functions to control their features.

Realme Buds Air 2 Neo are priced at PKR 7,999 (roughly Rs. 3,800), and are currently available at an introductory price of Rs. 5,999 (roughly Rs. 2,900). The company hasn't announced until when the introductory period is expected to last. Realme is offering the TWS earphones in Active Black and Calm Grey colour options. Realme hasn't provided any details on the earbuds' debut in global markets.

Realme Buds Air 2 Neo TWS earphones are equipped with 10mm Liquid Crystal Polymer (LCP) bass boost driver along with a Bass Boost+ algorithm that is claimed to deliver deep bass and clear stereo sound. One of the most advertised features of the earbuds is ANC that is claimed to reduce surrounding noise by up to 25dB. There is a Transparency Mode that allows the user to hear the chatter around them without taking out the earbuds.

The Realme Buds Air 2 Neo TWS earphones are equipped with an R2 chip for ultra-low power consumption and a stable connectivity. There is a dual-mic setup that is supported by the environmental noise cancellation (ENC) algorithm to significantly reduce surrounding noise for clear communication during calls. Furthermore, the earbuds are claimed to provide latency as low as 88ms when the Gaming Mode is turned on. The company says that both earbuds transmit sound at the same time, reducing latency and lagging.