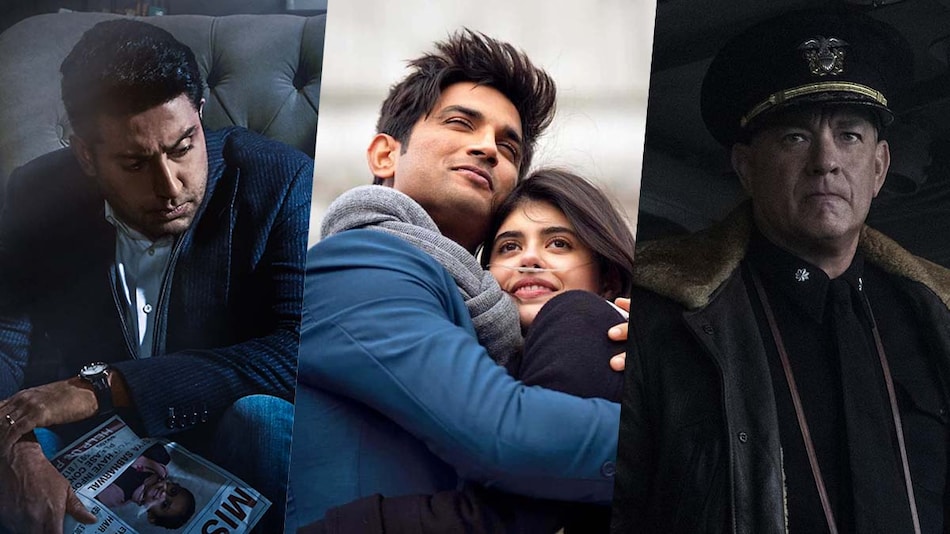 (L-R): Breathe: Into the Shadows, Dil Bechara, and Greyhound

We said goodbye to a few TV shows in June, of which the German time-travelling thriller Dark was by far the highlight even as it made some surprising choices in its final season. Dark season 3 was arguably also the best streaming entry on offer in June, in a month that opened a new frontier for streaming in India, with the Amitabh Bachchan, Ayushmann Khurrana-starrer Gulabo Sitabo becoming the first major Bollywood movie to skip theatres entirely, owing to the ongoing coronavirus pandemic.

That paradigm shift continues in July, as Disney+ Hotstar and Apple TV+ get into the straight-to-streaming game with films featuring Sushant Singh Rajput and Tom Hanks, respectively. Elsewhere, we've a filmed version of an award-winning stage musical, Charlize Theron doing more Atomic Blonde style action albeit this time as an immortal mercenary, and a new series from and with Cate Blanchett. With that, here's our July 2020 guide to Netflix, Disney+ Hotstar, Amazon Prime Video, and Apple TV+.

When: July 3
Where: Netflix

Early reviews — 100 percent on Rotten Tomatoes and an 88 score on Metacritic — paint a very promising picture.

When: July 3
Where: Disney+ Hotstar

Originally set for a theatrical release in 2021, Disney brought it forward to serve stuck-at-home audiences during the pandemic.

When: July 8
Where: Netflix

Cate Blanchett co-created and co-stars in this Australian miniseries about four strangers — an airline hostess who escaped a cult, an Afghan asylum seeker, a father stuck in a dead-end job, and a bureaucrat facing a national scandal on the horizon — who have varied experiences with the immigration system. Yvonne Strahovski (The Handmaid's Tale), Dominic West (The Wire), and Jai Courtney (A Good Day to Die Hard) also star.

Inspired by the real-life story of German-Australian Cornelia Rau, who was unlawfully detained for 10 months. Originally aired on ABC Australia in March and April, it now makes its way to Netflix worldwide.

Breathe: Into the Shadows

When: July 10
Where: Amazon Prime Video

Tom Hanks is the star and writer — only his third script, based on C.S. Foreste's 1955 novel “The Good Shepherd” — on this World War II drama about a US Navy Commander (Hanks) given his first war assignment: lead an Allied convoy of 37 ships across the North Atlantic, while being pursued by German submarines.

Second feature for cinematographer-director Aaron Schneider; his first — Get Low — was a critical success. Originally planned for theatres, Sony Pictures sold it to Apple for $70 million (about Rs. 530 crores) due to the ongoing coronavirus pandemic.

Named after the second album of singer-songwriter Sara Bareilles, who contributes original music to the series and is an executive producer alongside J.J. Abrams, a coming-of-age story described as “a fresh, intensely romantic tale of the search to find your true voice… and then the courage to use it.” Created by Jessie Nelson (I Am Sam), who also writes and directs the first episode.

When: July 10
Where: Netflix

Charlize Theron produced and stars in this superhero movie based on writer Greg Rucka and illustrator Leandro Fernandez's comic book of the same name, about a group of immortal killers-for-hire with healing abilities who must fight a new threat that wishes to exploit their powers. KiKi Layne (If Beale Street Could Talk), Matthias Schoenaerts (Rust and Bone), and Chiwetel Ejiofor (12 Years A Slave) also star.

Rucka also wrote the film, which has been directed by Gina Prince-Bythewood (Beyond the Lights).

When: July 17
Where: Netflix

Katherine Langford (13 Reasons Why) steps into the English legend of King Arthur as Nimue — destined to become the Lady of the Lake — in this reimagining told from her perspective. It's based on writer Thomas Wheeler and artist Frank Miller's 2019 illustrated novel of the same name. Wheeler and Miller also created the Netflix series, with the former writing several episodes.

When: July 24
Where: Disney+ Hotstar

Sushant Singh Rajput makes his final posthumous appearance in this adaptation of John Green's 2012 novel, The Fault in Our Stars, that ages up its two lead characters. A feature directorial debut for long-time casting director Mukesh Chhabra, who was suspended from the helm during the #MeToo movement, but later reinstated after being cleared of charges that he denied.

Originally planned for theatres, but then sold to Disney+ Hotstar — among six others — due to the ongoing coronavirus pandemic.

When: July 24
Where: Netflix

Despite the original being dubbed misogynistic, regressive, and clichéd, the film's success with audiences convinced Netflix that a sequel, with the same creative team, was the right move. Still based on Beth Reekles' eponymous book series, it finds Elle (Joey King) and Noah (Jacob Elordi) drawn to new love interests as their relationship goes long distance, what with the latter now at Harvard.

The superpowered Hargreeves foster siblings are scattered over a three-year time period across 1960s Texas, USA in the second season of comic book adaptation, having used Five's (Aidan Gallagher) powers to escape Vanya (Ellen Page). Naturally, they have to find a way to reunite. But that's not all. There's another apocalypse to deal with, caused by their actions in the first season. And there's a new trio of Swedish assassins on their tail.