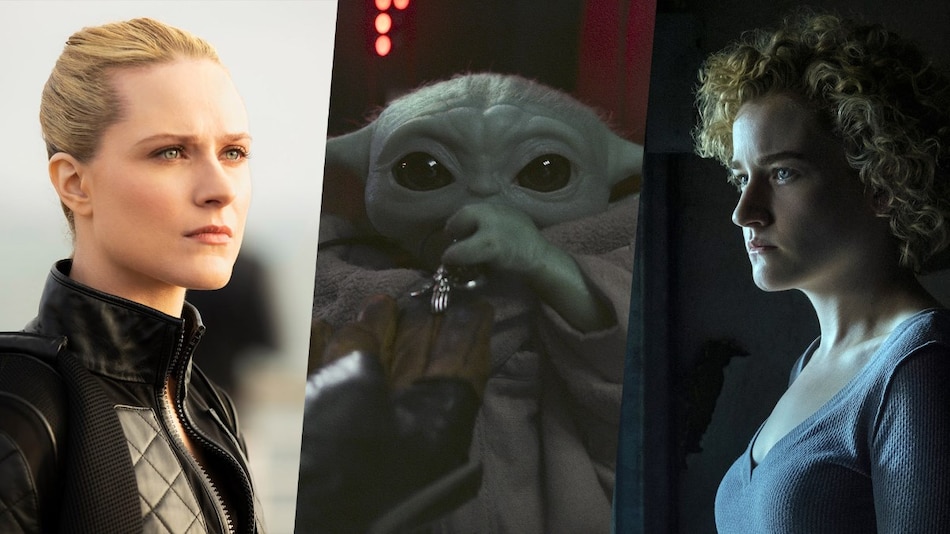 (L-R): Westworld, The Mandalorian, and Ozark

Brooklyn Nine-Nine season 7 and Narcos: Mexico season 2 were the big names in February on TV, with both shows giving fans what they were looking for. The former continues all through March; it airs Mondays on Comedy Central in India. Speaking of ongoing series in March, there's the eighth and final season of Homeland, which will bring an end to Carrie Mathison's arc. We also have John Oliver's news satire show Last Week Tonight, which itself became news in India after Hotstar chose to excise an episode that was critical of PM Modi, as sure a sign of pro-government censorship you'll ever see.

February also gave us the little-known and forgettable Indian series Taj Mahal 1989. March has more to offer on the local front — from or featuring the likes of Karisma Kapoor and Neeraj Pandey — but whether any of it sticks remains to be seen. With the late March arrival of Disney+ on Hotstar, the biggest name will (expectedly) be the Star Wars series The Mandalorian. Elsewhere, we've got the return of Westworld and Better Things to look forward to, in addition to new shows from Steven Spielberg, LeBron James, the creator of The Wire, and the director of Ex Machina.

When: March 5
Where: Netflix

One of the biggest original animated series for the world's biggest streaming service continues to expand as it moves into its 10-episode third season. (There were just four episodes in the first, and eight in the second season.) It promises “more mystery, murder, mayhem, and vampires than ever”, with writer Warren Ellis calling season 3 “psychedelic horror”. That bodes well. All episodes on release date.

When: March 6
Where: Apple TV+

In 1985, Steven Spielberg created this Twilight Zone-influenced anthology sci-fi series that won five Emmys during its two-season run. Thirty-five years later, Apple is reviving it with the help of Once Upon a Time creators Eddy Kitsis and Adam Horowitz. The cast includes the likes of Josh Holloway, Victoria Pedretti, and Dylan O'Brien. Five episodes on release date.

Watch the Trailer for Amazing Stories

When: March 6
Where: Hotstar

Creator, writer, star, and director Pamela Adlon returns with the only show about a single mom (Adlon) and her three kids — as far as we know — that is now in into its fourth year. Themes include forgiveness, togetherness, and “divorce is contagious”, as Adlon said on a podcast. Silicon Valley co-creator Mike Judge is a guest star. Two episodes in the first week, then weekly.

When: March 6
Where: Hotstar

Fed up with film studios, Ex Machina writer-director Alex Garland turns to TV with this tech thriller miniseries about a software engineer (Sonoya Mizuno) who investigates a quantum computing company she works at, believing it's behind her boyfriend's disappearance. Nick Offerman (Parks and Recreation) stars as the head of the quantum firm. Two episodes in the first week, then weekly.

When: March 11
Where: ALTBalaji, Zee5

Karisma Kapoor is back from another acting hiatus as the lead of this comedy-drama that follows six “supermoms” — there's one “superdad” in there, for what it's worth — who try to balance the unreasonable expectations of their kids, their partners, and their own. Shruti Seth, Sanjay Suri, Dino Morea, and Sandhya Mridul also star.

Watch the trailer for Mentalhood

When: March 13
Where: Amazon Prime Video

Sumukhi Suresh's semi-autobiographical series, about a woman who gives up everything and moves to Bengaluru to stalk her new romantic interest, was rightly compared to Crazy Ex-Girlfriend upon its premiere three years ago. Where will it go in its second season? All episodes on release date.

When: March 16
Where: Hotstar

Nearly two years after it last aired, HBO's imaginative, mind-boggling sci-fi series from husband-wife duo Jonathan Nolan and Lisa Joy returns for its third season. Not everyone is now in the theme park, with the futuristic Los Angeles the setting for Dolores (Evan Rachel Wood) and Aaron Paul's new character, while Maeve (Thandie Newton) takes a trip through Nazi-era Italy for reasons unknown. Airs weekly.

The Plot Against America

When: March 17
Where: Hotstar

What if an anti-Semitic aviation hero and xenophobic populist had ran against Franklin D. Roosevelt for US President in 1940 — and won? That's the question asked by this six-part miniseries from The Wire creator David Simon, based on Philip Roth's 2004 novel. Winona Ryder (Stranger Things), Zoe Kazan (The Big Sick), John Turturro (The Night Of), and Morgan Spector (The Mist) head the cast. Airs weekly.

When: March 17
Where: Hotstar

Neeraj Pandey is — as creator, director, and producer — at the helm of what looks like a low-rent Bard of Blood, in which Kay Kay Menon (Shaurya) devotes two decades of his life to catch the mastermind behind some of the biggest terrorist attacks in India, from 26/11 in Mumbai to Parliament in 2001. (The events are real; the story is fiction.) Hopefully, Pandey will do better than Netflix did. All episodes on release date.

Self Made: Inspired by the Life of Madam C.J. Walker

When: March 20
Where: Netflix

When: March 27
Where: Netflix

Despite two seasons of mediocre reviews, the Jason Bateman-starrer crime drama is back for a third that finds Marty Byrde (Batmena) further descend into the abyss as he grapples with the new power dynamic with his wife Wendy (Laura Linney), while the teenage daughter of a local criminal (Julia Garner) schmoozes with the Byrdes. Tom Pelphrey (Iron Fist), Jessica Frances Dukes (Jessica Jones), and Madison Thompson (NCIS) are new to the cast. All episodes on release date.

When: March 29 (expected)
Where: Disney+ Hotstar

With Disney+ making its way to India with the start of the 2020 IPL, fans should finally be able to get their hands on the first-ever Star Wars live-action series. We say “should”, because Hotstar says it doesn't know anything, even now. Set five years after Return of the Jedi, it follows a lone gunfighter (Pedro Pascal) in the outer reaches of the galaxy. Spoiler: you might know it as the show that gave us Baby Yoda.

The Mandalorian on Disney+ Is a Most Curious Thing, Just Like Baby Yoda