Chup will be available to viewers in five languages – Hindi, Telugu, Tamil, Kannada, and Malayalam. 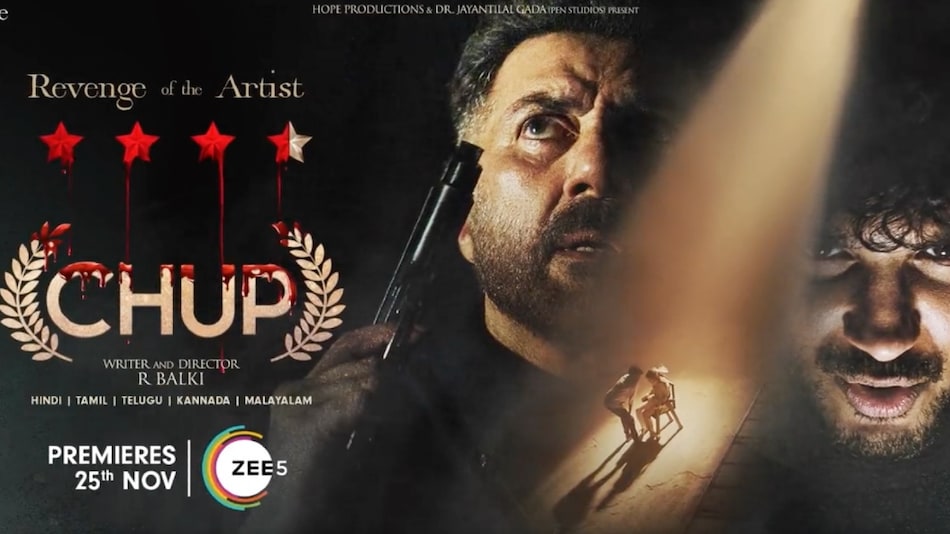 Filmmaker R Balki's Chup: Revenge of the Artist is set to have its OTT premiere on Zee5 on November 25, the streamer announced Saturday.

Starring Sunny Deol, Dulquer Salmaan and Shreya Dhanwanthary, the thriller chronicles the story of a psychopath killer targeting film critics. The movie had received mixed reviews from the critics when it was released in theatres on September 23.

Balki said Chup, which is billed as a homage to master filmmaker Guru Dutt and his 1959 classic Kaagaz Ke Phool, is a film made around the sensitivity of an artist.

"Chup is a story that examines the insensitivity towards an artist's work and also the flaw in the reaction of the artist towards such criticism. Its a film about the dangerous consequences of mistaking responsibility for power," the director said in a statement.

With its world digital premiere on Zee5, the film will be available to viewers in five languages – Hindi, Telugu, Tamil, Kannada, and Malayalam.

Another awaited movie on Zee5 is Madhur Bhandarkar directorial India Lockdown, which is set to release on the OTT platform on December 2.

India Lockdown weaves together four parallel stories, which revolve around an elderly father desperate to reach his pregnant daughter, a grounded pilot stuck at home, a feisty, out-of-work sex worker and a migrant couple walking home to their village. The film brings out the trauma and trails of the common people during the first lockdown following the COVID-19 pandemic.

The movie was filmed in February and March of 2021, right before the deadly COVID-19 Delta wave hit the country.