Spoilers ahead for the new Netflix movie with Chris Hemsworth. 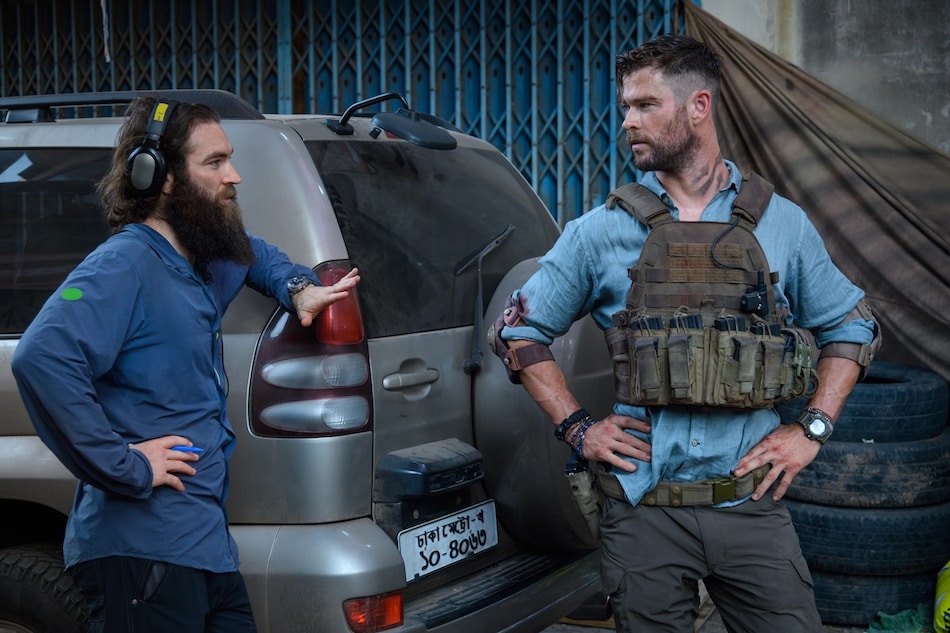 Sam Hargrave, Chris Hemsworth on the sets of Extraction

Extraction — the Netflix action thriller movie with Thor star Chris Hemsworth — ends on an ambiguous note, leaving the fate of the mercenary-for-hire protagonist Tyler Rake (Hemsworth) up in the air. Tyler seemingly dies in Dhaka as he tumbles into the river below, while his team secures the drug lord's kid Ovi Mahajan Jr. (Rudhraksh Jaiswal) and gets him to the helicopter, completing their extraction mission. But back home in Mumbai, as Ovi resurfaces in the swimming pool, he spots a figure in the background who may or may not be Tyler. Since he's out of focus, it's impossible to tell. Extraction then cuts to black.

Review: Chris Hemsworth's Extraction Is Heavy on Action, but Little Else

In an interview with Collider, Extraction director Sam Hargrave revealed that was purposeful, because he wants the audience to pick what works better for them. Some might choose to believe that Tyler is indeed alive and somehow survived his mortal wounds, while others might think Ovi is simply imagining or hallucinating. Hargarve and the rest of the team debated the Extraction ending a lot, going so far to shoot multiple endings and showing them to test audiences. The opinion was apparently split evenly, with half wanting Hemsworth's character to live, and the other half wanting him to die.

“We had a version of the movie, and we tested it a lot, and it was not surprising that a lot of people wanted the character to live, and some people wanted him to die,” Hargrave said. “People were torn; it was almost down the middle. We want to appeal to as many people as possible without compromising the integrity of the story. And so, we think a pretty good compromise is to make an ambiguous ending. […] We'll give you the best of both worlds […] where you can choose your own adventure.”

“If people on one hand feel like the story is complete and is a story of redemption through sacrifice, then for them, it'll be where the kid is imagining [Rake standing there], and then now you go, ‘Yes, I'm satisfied',” Hargrave added. “If you feel like you love Tyler Rake, and you love Chris Hemsworth, and you want a sequel, and you're like ‘There's no way, you can't kill him!' then that's Tyler Rake standing there looking at you. So we kind of purposefully did not pull focus to the character standing there.”

Randeep Hooda Dives Into the Making of Netflix's Action-Heavy Extraction

Some might call Hargrave's desire to “appeal to as many people as possible” not a compromise, but a cop-out. There's a wide gap between choosing to kill or not kill your central character, and leaving that decision up to test audiences, instead of having a definitive one in your mind, speaks to how immaterial Tyler's death is, ultimately. It also doesn't help that Extraction never really grips you emotionally, with all of its focus being on the relentless action. For what it's worth, Hargrave seemingly wanted to be definitive, before being convinced otherwise.

Here's what happened in the original version according to Hargrave: “In the original script [written by Avengers: Endgame director Joe Russo] — and this was my idea — [Tyler] does not live. His story was complete because he found something to keep him alive, and his journey was complete when he came to redemption through sacrifice. He made the choice he was okay with. He had come to terms with his past and the choice he made in the present saved this kid, and if that meant him dying, so be it. And that was his journey in my mind.”

Extraction is now streaming in English, Hindi, Tamil, and Telugu on Netflix in India.