Fantastic Beasts: The Secrets of Dumbledore Review: The Best Yet, but That’s Not Saying Much

The five-film series finally gains a willingness to depict politics and homosexuality, but is still spinning its wheels. 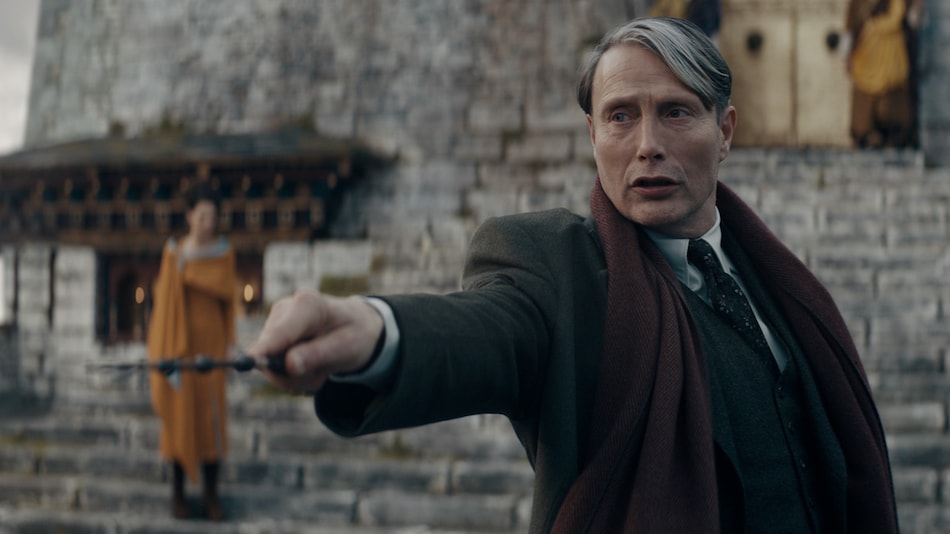 Mads Mikkelsen as Gellert Grindelwald in Fantastic Beasts: The Secrets of Dumbledore

Fantastic Beasts: The Secrets of Dumbledore — out now in cinemas — comes at a time when the Harry Potter world is possibly at its lowest. The third chapter of the spin-off film series flies in on the back of Fantastic Beasts: The Crimes of Grindelwald failing critically and commercially, with a review consensus lower than the ghastly Justice League and the second entry making less than any Wizarding World movie before it at the box office. More importantly, Fantastic Beasts: The Secrets of Dumbledore arrives at a time when its creator and Harry Potter author J.K. Rowling finds herself in her personal nadir. Not only has she repeatedly spewed transphobic comments, the influential Rowling has steadfastly refused to be educated on her dangerous views.

It's the kind of situation that has got me thinking if it's time for the Harry Potter universe to be laid to rest. No one ever really asked for these movies. They were fashioned from the strangest of crucibles, with an in-world encyclopaedia being turned into the starting point. Seriously, why is “Fantastic Beasts” still in the title of these movies? It's utterly meaningless. Making more Wizarding World content — let's face it, that's how they see it — is solely in the interest of the powers that be. Warner Bros., the billionaire Rowling, and those profiting off it continue churning out new Fantastic Beasts movies because it makes them richer. All of which results in more money via tie-in toys, books, merchandising, and associated products.

Characters that were central in earlier movies are forgotten or removed with the flimsiest of excuses. Moreover, the Fantastic Beasts movies are really struggling with the hero switcheroo. While Rowling decided on the encyclopaedia's author Newt Scamander (Eddie Redmayne) as the gateway into the world, he's not central to the bigger picture. These movies should've always been about the two greats, Albus Dumbledore (Jude Law) and Gellert Grindelwald (Mads Mikkelsen replacing Johnny Depp), whose teenage love story is finally acknowledged — in words — on Fantastic Beasts: The Secrets of Dumbledore. But The Secrets of Dumbledore doesn't quite have a protagonist. And its directionless story feels like a time-filler, as if they must do something until they get to the fifth movie.

Still, the Fantastic Beasts: The Secrets of Dumbledore screenplay is a great deal better than what's come before. That's thanks to the return of Harry Potter veteran Steve Kloves — he single-handedly wrote seven of the eight Potter movies — who was no doubt brought back after Rowling's failures as an inexperienced screenwriter on the first two Fantastic Beasts movies. Kloves has correctly identified that Rowling confused mystery, intrigue, and propulsive force for what made an enjoyable movie. In response, Kloves has slowed everything down on The Secrets of Dumbledore. He's written longer scenes that allow characters and their dynamics to be fleshed out. At the same time, it's debatable if there's enough happening in each scene to justify the slowed approach.

That very deliberate pacing is clear from the start. Fantastic Beasts: The Secrets of Dumbledore spends its first hour in essentially bringing everyone slowly back together. It's like it's setting up a giant chess board of sorts. Though from another perspective, one could argue it's spinning its wheels. After all, The Secrets of Dumbledore's narrative spans roughly just a week, I gather, going by the lines spouted by some characters. Rowling's narratives used to be yearlong in the Harry Potter books — that way, each novel was about a new school year at Hogwarts, in turn serving the series' coming-of-age nature. It also meant there was room for a lot to happen, even as not all of it made it to the movies. But now that's she been writing directly for screen (and adults), there's no need for that.

Fantastic Beasts and Where to Find Them Review: A Brewing Dark Side

Centred around a pivotal Ministry of Magic election, Fantastic Beasts: The Secrets of Dumbledore follows a new team that's been tasked by Dumbledore to stop Grindelwald from influencing its outcome. I say “new” because the faces, their presence, and their allegiances shift weirdly from movie to movie. While Newt is still central, his non-magical bakery-owner friend Jacob Kowalski (Dan Fogler) is less so. Meanwhile, Newt's love interest Tina Goldstein (Katherine Waterston) is completely out of the picture. Her place as Newt's sidekick has more or less been taken by Newt's older Auror brother Theseus (Callum Turner), with the Scamander brothers now on more agreeable terms.

There's a much larger role for Professor Lally Hicks (Jessica Williams) and Newt's “indispensable” assistant Bunty Broadacre (Victoria Yeates), both of whom had forgettable roles on The Crimes of Grindelwald. But that honour continues — for the second movie running — for the French-Senegalese wizard Yusuf Kama (William Nadylam) who's now working with Newt and Co., and their former telepathic teammate, Jacob's love interest, and Tina's sister Queenie Goldstein (Alison Sudol) who was swayed over to Grindelwald's side in the previous Fantastic Beasts film. Neither of them has anything particularly to do on The Secrets of Dumbledore. Queenie's betrayal doesn't really mean anything in the larger scheme of things, with Rowling's decision to do so now looking like a twist for twist's take.

In between all this, there's room for as ashen-faced Credence Barebone (Ezra Miller), whom Grindelwald claimed was Dumbledore's long-lost brother Aurelius at the end of the second Fantastic Beasts film. The Secrets of Dumbledore does satisfyingly answer that last-minute reveal — the movie's title doesn't refer to the Dumbledore you think it does — making it feel less a retcon than it did before. But despite that importance conferred on Credence, the third Fantastic Beasts movie doesn't quite know what to do with him. At one point, Grindelwald tells Credence to kill Dumbledore, a task that has no stakes because all of us know how Dumbledore dies.

The big failure of Fantastic Beasts has been the lack of care it has shown towards its supporting characters who exist to fill spaces and haven't been properly explored, even three-fifths of the way into the series' run.

Is It Time for the Harry Potter Universe to Say Goodbye?

The Secrets of Dumbledore does better with its leads. For the first time, Dumbledore's homosexuality — announced after the fact, once the Harry Potter books had finished — is front and centre. Law not only gets to lean into the love he once felt for Grindelwald, but also the many regrets of his life, feeling he's let down Credence, his late sister Ariana Dumbledore, and his brother Aberforth Dumbledore (Richard Coyle). It also helps that he gets more screen time than before. Meanwhile, Mikkelsen delivers a richer, more grounded take on the dark wizard Grindelwald, minus Depp's cartoonish theatrics and Captain Jack Sparrow-like flair. Redmayne's performance continues to be curious, and I'm still not sure what to make of his forever-head-titled socially-awkward take on Newt.

Additionally, the new Fantastic Beasts movie gets into some interesting thematic places too. The German Ministry of Magic in 1930s Berlin is an important location in The Secrets of Dumbledore — anyone who knows history knows where this is going — with Grindelwald using hatred and bigotry to divide the magical folk from the Muggles. Yet, there are those in the Ministry who are talking about listening to all kinds of voices, fearful of the populist riot they might face. Grindelwald is acquitted of his crime and allowed to stand for political office, a clear sign of appeasement. The Secrets of Dumbledore makes for fascinating and obvious parallels with our world today, where fascism is on the rise and autocrats are in power in major countries.

Though Fantastic Beasts: The Secrets of Dumbledore cuts into heavy topics, there's an attempt to be goofy elsewhere too. There's an extended sequence where Redmayne and Turner “swivel” their hips to avoid being eaten by creatures. Speaking of, there's not a lot of action here — by my count, just three scenes in a 142-minute movie — with The Secrets of Dumbledore trying its best to be more about character scenes. That alone makes it infinitely better than the second one, but it's not very engaging minute to minute. But there's so much baggage — poor starting decisions have put it in this place — that it's tough for anyone to find their way out of this mess. Least of all director David Yates, who's been with this franchise since 2007's Harry Potter and the Order of the Phoenix.

The biggest problem is that these Harry Potter spin-off movies have always strained to justify their existence. Especially as a five-film series. Each of them is like an episode that moves the story a bit forward, but never too much. The Secrets of Dumbledore is the best of the lot, but to be fair, that's really a backhanded compliment.

Fantastic Beasts: The Secrets of Dumbledore