Kumar plays a creep whose behaviour is repeatedly excused by this old Bollywood movie. 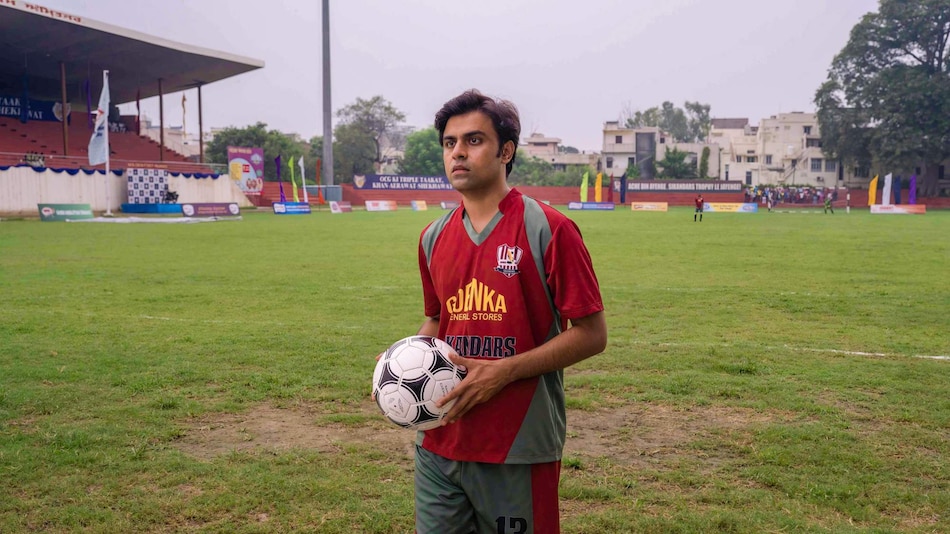 Jaadugar — now streaming on Netflix — gets everything wrong from the first minute. In it, Jitendra Kumar plays “Meenu” Narang, a toxic and insufferable man-child who thinks he knows what love is. Meenu declares that he loves someone the first time he meets them. (Ew.) Meenu proposes marriage repeatedly, at times weeks after he's met someone, even though he doesn't know their last name, let alone what they want to be in life. (What is wrong with this guy?) Everything Meenu does in life is to “win” a woman, not because he actually cares. And along the way, he expects rewards — like a kiss on the cheek — for doing the basic right thing. Jaadugar thinks Meenu just loves deeply. But in reality, he's just a creep.

And that's the big problem with Jaadugar — directed by Sameer Saxena and written by Biswapati Sarkar (Permanent Roommates) — in that the new Netflix movie is always on Meenu's side. Not only does it excuse his behaviour with women, it justifies his attitude and mocks those who Meenu laughs at. In a seemingly pivotal scene, Meenu berates his uncle for being a failure and essentially drives him to suicide. But in an absurd manner, the uncle ends up being the butt of a joke minutes later. Meenu doesn't care about his football family either. Even though they help him in a big way, he's happy to betray them and sabotage their chances the next day. Most of all, Meenu displays zero empathy for the woman he loves after she narrates a dark past.

Jaadugar is not only served via Meenu's gaze, it's also wholly Meenu's world and only about Meenu's story. Nobody else matters. In many ways, Jaadugar feels like an old Bollywood movie with a bunch of tired tropes. (Even Nilotpal Bora's soundtrack feels like it's borrowed from senti ‘80s movies.) One of those Shah Rukh Khan movies from decades ago, where he kept chasing women for three hours and the movie kept excusing his behaviour. (Speaking of, Jaadugar is 166 minutes long.) Those may not have been considered problematic then, but it's clear to most of us now that they aided a culture of harassment. Jaadugar's existence feels like a case of art imitating life imitating art. The new Indian Netflix movie is outdated, ill-conceived, and deeply problematic. It's a reprehensible relic.

Everything You Need to Know About Jaadugar

Meenu's story takes place in Neemuch, a football-obsessed small town in Madhya Pradesh close to the Rajasthan border. Though football might be in Meenu's blood — his dad was a great goalkeeper — he's not into football at all. He wants to be a magician, a jaadugar. In fact, Meenu positively hates football for it took away both his parents. (Though that doesn't stop him from trying to show off in front of his girlfriends.) Ever since his dad's passing, Meenu's uncle Pradeep Narang (Jaaved Jaaferi) has been trying to fulfil his late brother's wish of winning Neemuch's inter-neighbourhood football tournament. Unfortunately for Pradeep, he's coaching a comically dysfunctional team. The goalkeeper is useless with his left hand, one of the players cares only about swag, and another is focused on his music career.

And of course, Meenu is no help either. In any case, he's too busy chasing the newest girl and ophthalmologist in town, Dr. Disha Chhabra (Arushi Sharma). And he keeps doing that even though she repeatedly notes she has no interest in him. Less than a month after first seeing Disha, Meenu shows up with an elephant and a marriage proposal at her doorstep. It's insane and hilarious. Disha finally tells him that she'll only marry someone if her father okays it. And because Jaadugar is beyond comical, Disha's dad asks Meenu to do the impossible: win the football tournament. Meenu, who had no interest in helping Pradeep, turns over a new leaf. He finds a fantastic new player for the team, ropes Disha in to develop a better training regimen, and even plays a few of his magic tricks.

But the focus never really shifts from Meenu, and his attempts to “win” Disha. That's why despite having a runtime that can rival The Godfather — that epic is only nine minutes longer than this terrible Netflix production — Jaadugar never really develops any of the surrounding cast, the motley bunch that make up Coach Pradeep's football team. Most of them are used merely for comic relief, which explains why nearly all of them have “quirks”. In some cases though, these can be downright problematic. Jaaferi's character, for instance, is given a stutter. Couple this with the fact that he's shown to be weak and a loser, and you end up at an irresponsible connotation. Jaadugar is essentially implying that those with a speech disability are incapable of being successful in life.

Jaadugar, Resident Evil, The Gray Man, and More on Netflix in July

There are more problematic elements elsewhere. In the final match, opponents engage in verbal sexual harassment, a guy “protects” the woman by retaliating physically, and the incident is never addressed again. It's just a plot point that furthers the football game. (Speaking of football, Jaadugar display no understanding of the beautiful game. I can tolerate that on a great show like Ted Lasso, but here in a movie that could never get me on its side, it just got on my nerves.) With meaningless and convoluted twists and turns, Jaadguar borders on being a parody of itself at times, before descending into full parody in the final few minutes.

Meanwhile, Meenu repeatedly comes close to gaslighting Disha, sells out his team for love, and shows no appreciation for how people help him. Still, he ends up as the “winner” at the end of Jaadugar, even getting the seal of approval from the woman's father. This despite the fact that he has shown no character growth across the punishing runtime. Jaadugar is set up with the premise that Meenu doesn't know what love is, but two and a half hours later, Meenu is still — inexplicably — the same person. He learns nothing across the entire movie. And the fact that Netflix India keeps churning out originals of this quality, indicates it hasn't learnt anything either.

Can someone please wave their wand and make this movie disappear? Thanks.

Instagram Back Up After Brief Outage That Prevented Thousands of Users From Accessing Service
The Lord of the Rings: The Rings of Power Trailer Introduces New Characters and Realms